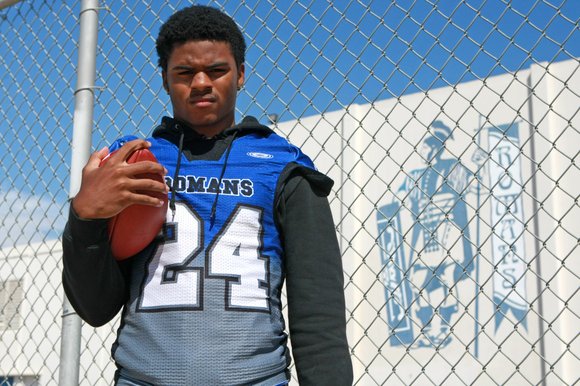 Justin Rogers’s 3.6 grade point average and great athletic abilities are leading him to the University of Texas at El Paso (UTEP). Photo by Jason Lewis

Justin Haasan Rogers has always been a winner, but he just needed to land at the right program where he could shine. Los Angeles High School has become that perfect landing spot, thanks to his abilities and the school’s resurgence which have helped make him a champion.

Rogers started playing football at six years old, playing flag and then tackle football in Long Beach. He played his first two high school seasons at Long Beach Cabrillo High School, but it was not until his junior year, when he transferred to Los Angeles High School, that he finally found himself on a successful team. That success ended with a Division III City Section championship.

“That might have been my first winning season, so it was a great experience,” Rogers said. “I was always on teams that were around 5 and 5, or 6 and 4. I was always on mediocre teams.”

Rogers was always one of the best players on his teams growing up. He won his team’s MVP award a number of times, and was named to the all-star game every year. He was always faster than most of his opponents, so he used his speed to run by them.

During Rogers’ sophomore year, he was elevated to the varsity team, even though he was smaller than many of the players on the team. His ability to make tackles led him to playing strong safety, even though he did not have the natural size to play the position.

“I’m not a super big fan of contact but by my second or third year of Pop Warner, I figured out that I could tackle people no matter how big they are, if I tackle them right,” Rogers said. “If you want to take somebody down, you’ll take them down.”

Rogers was excelling on average teams, but Los Angeles High Coach Eric Scott changed all of that.

“I’m glad that I came here under Coach Eric Scott,” Rogers said. “He taught me a lot about what differentiates a good player from a great player. The difference is practice. Repetition is definitely the key to what we do here.”

During his time at Los Angeles, Rogers was on the City championship team during his junior year, and this past season, his team made it to the Division II championship game.

As a receiver, Rogers was able to beat defenders multiple ways.

“I can catch the ball anywhere,” Rogers said. “What we do here is stress route running, and my route running is really good. So I could get open anywhere on the field. But watching my highlights, I was a deep threat, I was just running by everybody.”

As a defensive back, Rogers is used to being out on an island by himself with receivers.

“I’m a lockdown corner,” Rogers said. “A lot of these guys are zone corners, and they play within their defense, which is fine, but I’m a one-on-one guy. I can play zone too, but I like to handle them on my own.”

“Growing up playing football, I built the confidence to be able to know that I’m going to dominate whoever is in front of me,” Rogers continued. “I’m going to put the team on my back, so if you’re going to throw to the him (the receiver), I’m going to win every time.”

Rogers puts in a lot of practice time on the field, and the key his success is repetition in practice. He also weight trains at 24 Hour Fitness, focusing on developing his explosive power.

“Being a corner, you’re always bending,” Rogers said. “You need your lower body to do well in any sport, so we focus on squats, jumping, a lot of plyometrics, box jumps, footwork, and running stairs.”

It also helps that Rogers comes from an athletic family. His father played basketball for Long Beach State, and his mother also played basketball. His older brother, who is heading to UNLV, followed their parent’s footsteps in basketball, but Rogers likes football more.

Rogers has appreciated the presence of his father while he competes.

“He was always my coach, at every game telling me what to practice on,” Rogers said. “I was glad to have my father at all of my games.”

While Rogers believes that he is a better athlete than his older brother, he’s not so sure that he is better than his father.

Rogers will have some more time to catch up with his father, because his athletic career will continue at the University of Texas at El Paso, also known as UTEP. His accomplishments on the field in high school helped him achieve this goal, and his 3.6 grade point average has made him a very attractive prospect. Rogers was always a good student, but it was not until high school that he decided to take his abilities to a higher level.

“I was always a good student in terms of classroom presence, and speaking, and being a leader,” Rogers said. “But I just didn’t do homework. I’d always ace the test, but never do the homework. So I’d end up with mediocre grades. During the first semester of my sophomore year, I realized that I wanted to do better. I knew that I wanted to go to college playing sports.”

Time management can be difficult for a student athlete, but Rogers finds ways to get his work done.

“I get it done by any means possible,” Rogers said. “Getting it done at school or at home, but what I focus on is taking the time to do it. Normally kids my age are distracted by a bunch of things, like TV, social media, and friends. But I realized that it doesn’t take me that long to do things. I realized that I’m going to be going to college, and I’m not going to have somebody in my ear, telling me to do my homework. So I chose to improve my study habits. After that, I really excelled at school.”

Rogers’ favorite subjects are English and history. He works on his writing abilities, which will come in handy when he gets to college, and reading has led to his desire to learn history.

“Growing up, I’ve always been around the Bible,” Rogers said. “Reading it, and connecting the pieces about what our past was. It was always cool to me to know what was done then.”

Rogers also has been fascinated by the Renaissance period, which took place from the 14th to 17th centuries.

“I really liked it, because there was so much creativity, and people doing so many things,” Rogers said. “Just the fact that they were doing so many creative things, and it amazes me that people were able to do so many things like that at that time when technology was bare minimum compared to what we have now.”

Rogers is planning on majoring in business and finance, with a minor in journalism or screen writing.

“Black people, not a lot of us know exactly what to do with our money,” Rogers said. “So I want to learn about that. Even though that’s not my favorite subject, I feel that that’s something that I need to know.”

Rogers has difficult tasks ahead of him, but his upbringing, and certain values that his mother instilled in him will help him through his college years.