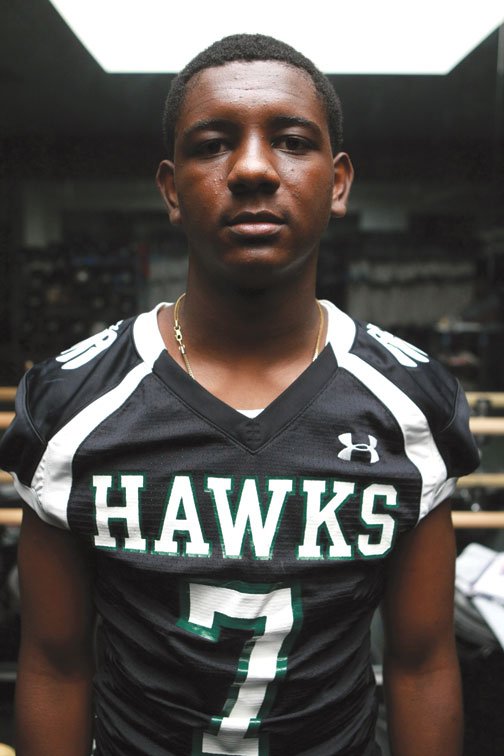 Standing at 6’1” and 175 pounds, Lemle, in his junior year, has passed for 1,054 yards, 13 touchdowns and has given up only two interceptions, to lead his team to a 4-0 start. It’s also helpful that the dual threat quarterback has one of the best receiving groups in the area.

“We have good receivers out there,” Lemle said. “Two five-star athletes at receiver. I try to distribute the ball between them, and when my time comes to run the ball, I’ll get my yards.”

The road to success was not a smooth one for Lemle, who started his high school career in Bellflower, at football powerhouse St. John Bosco. He was a star athlete on their junior varsity team, but discovered that spending the bulk of his time away from home was becoming a problem. The solution to that issue was to come back home and play in the area where he grew up—at Hawkins.

Having his uncle as the head coach at Hawkins ostensibly might have made the transition easy, but Lemle was not about to get any family handouts.

“At first, I thought that it was going to be easy, but it’s not because they’re your family. They want to push you harder than anything else,” Lemle said.

James has taken pride in developing his nephew, who he has mentored since Lemle was a child.

“I’ve always tried to be an example to Dylan of what he could become, if he worked hard, academically as well as athletically,” James said. “He went to most of my college games, when I played at UCLA and UNLV. He saw the college atmosphere, and he grew to love it at a young age. It motivated him and it pushed him harder.”

James said Lemle has a strong arm and makes quick decisions, but his future may be at receiver. He runs precise routes, has really great hands, and his quarterback background can aid his transition to receiver, when he gets to college.

Colleges have taken notice of Lemle’s abilities. Utah has offered him a scholarship, and Arizona, Oklahoma, and Colorado State have been in contact with him as well.

Athletic ability alone will not get him to college, because Lemle realizes that academic performance is just as important as excelling on the football field. Like any athlete with aspirations of playing college sports, he knows he has to balance his academic and athletic careers.

“It’s time management,” Lemle said. “You just have to know how to use it. When it’s time for homework, I turn in my phone. I’m not allowed to use it, when I’m doing homework.”

Lemle also performs community service through his school and at his church, Ward A.M.E., where his father Charles created a fraternity, Jesus Phi Christ.

Going to school close to home under the guidance of his family has greatly enhanced Lemle’s abilities to reach his full potential, and one day he knows he will be an asset to the Black community.