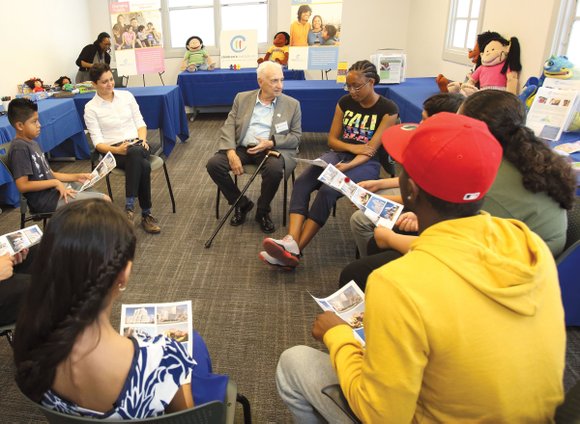 A new Children’s Institute campus is scheduled to be built in Watts. Frank Gehry, the internationally acclaimed architect known for the Disney Concert Hall in Downtown Los Angeles and the Getty Museum in West Los Angeles, has signed on to design the $35 million center set for groundbreaking in 2018.

Resembling stacks of colorful boxes and topped with gleaming sheets of metal, the two-acre campus is intended to house supportive services for about 5,000 under-served children and families, helping them recover from trauma, violence and poverty and directing them to more healthy, productive lives. The current institute at 1522 E. 102nd St. can only serve just over 2,000 children.

“We have provided critical services from leased facilities in Watts for the past seven years, and we’ve been active in the area for much longer,” said Mary Emmons, the Institute’s president and CEO. “The opportunity to expand and build upon the work we’ve accomplished here is one of our main areas of focus.”

It was on separate motions by Supervisor Mark Ridley-Thomas in 2011 and in 2013 that the Los Angeles County Board of Supervisors approved granting the Institute a gratis lease in Watts, with the option to purchase. Headquartered near Downtown Los Angeles, the Institute provides services to more than 24,000 children and families across the county each year. It was founded in 1906 by Minnie Barton, the city’s first female probation officer.

“The Institute has long provided a safe haven for our most vulnerable, and now it is joining forces with the legendary Frank Gehry,” Ridley-Thomas said. “I am excited to see this new campus rise in Watts, as it will elevate the community on so many levels—from protecting children to creating a new architectural gem for the neighborhood.”

The new center will include expanded rooms for individual and group counseling, a community meeting space, indoor and outdoor areas for after-school activities, early childhood education and childcare, areas dedicated to youth development programs such as art and computer training, and spaces for family support services and classes.

During an unveiling of the campus design held Saturday, Gehry stretched a planned 15-minute meet-and-greet session with Cii clients who were interested in art and architecture into an hour-long conversation with the youth. In fact, the architect was so impressed that he encouraged one young man to come back to him for an internship, when he turned 18.

“The Children’s Institute is an incredible organization with a vitally important mission,” Gehry said, who designed for facility free. “I am honored to be part of this project.”

Nina Revoyr, executive vice president and COO of the Institute, said the new structure is part of the on-going transformation of Watts. “We are proud, through our services and through this new facility, to be part of a bigger change in Watts.”