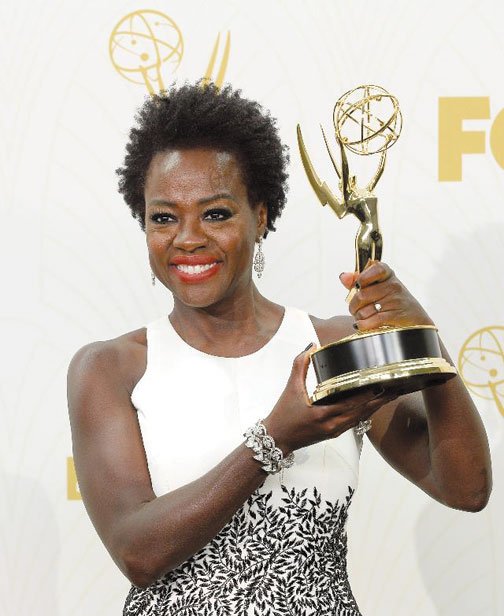 That was Harriet Tubman in the 1800s. That’s how actress Viola Davis began her acceptance speech as she became the first Black woman to win an Emmy as Best Actress in a Drama (ABC’s “How to Get Away with Murder”).

Davis used her “moment in the spotlight” brilliantly. She set the record straight. Without smiles or tears, Davis simply stated, “And let me tell you something, the only thing that separates women of color from anyone else is opportunity. You cannot win an Emmy for roles that are not there.”

Davis indeed made history twice; she and “Empire” star Taraji P. Henson became part of Emmy history by being the first two Black women nominated for Lead Actress in a Drama.

One of my favorite actresses also walked away with an Emmy win for Supporting Actress in a Mini-Series or Movie: Regina King, “American Crime” (ABC). She appeared to be genuinely surprised when her name was called. It was her first primetime Emmy Award nomination and first win.

Many TV viewers watched King grow up on TV (“227”) and think it’s about time she received this honor. If you missed her acceptance speech, check it out on You Tube, it will bring tears to your eyes.

One of the most joyful and passionate “thank-you’s” came from the winner of Supporting Actress in a Drama: Uzo Aduba, “Orange is the New Black” (Netflix).

She won last year for the same role but the show placed in the Comedy category.

Beaming with beauty and joy, Davis also thanked “How to Get Away with Murder” creator Pete Norwalk and executive producer Shonda Rhimes, calling them “people who have redefined what it means to be beautiful, to be sexy, to be a leading woman, to be Black.” She supported her statement recognizing such actresses as Taraji P. Henson, Kerry Washington, Halle Berry, Nicole Beharie, Meagan Good and Gabrielle Union. Davis added, “Thank you for taking us over that line.”

History Note: Actress Gail Fisher, won an Emmy Award in 1970 for her portrayal of Peggy Fair, secretary to the gumshoe played by Mike Connors on the CBS television series ‘’Mannix,’’ said to be one of the most violent and longest-running series of its era. It started in September 1967 and continued until August 1975. Fisher joined the show in its second year of production.

In a 1972 interview, Fisher is reported saying, ‘’Blacks were pretty much alien objects on TV as recently as 10 years ago, you know, and now we’re people. I think maybe before it’s all over, it’s going to be all right, and I’m proud I’m a part of that.’’ Gail Fisher passed away Dec. 2, 2000 of kidney failure.

Comedian/actor Tracy Morgan, seriously injured in a crash more than a year ago, walked out on stage to present the award for best drama series to “Game of Thrones.” Morgan, who suffered a traumatic brain injury in the June 2014 crash, which also killed comedian James McNair, thanked the crowd for their prayers and good thoughts. He also demonstrated he was feeling like himself again by vowing to impregnate “a lot of women” at the after party. The audience loved it and seemed relieved he still embodied his outrageous sense of humor.

If you missed any of the acceptance speeches, visit YouTube and check them out.

Actress in a Drama Series: Viola Davis, “How to Get Away With Murder” (ABC)

Supporting Actress in a Drama: Uzo Aduba, “Orange Is the New Black” (Netflix)

Outstanding Lead Actress in A Limited Series or A Movie: Queen Latifah as Bessie Smith, “Bessie”

Best Supporting Actress in a Mini-series or Movie: Mo’Nique, “Bessie,”

Outstanding Actor in a Mini-series or Movie: