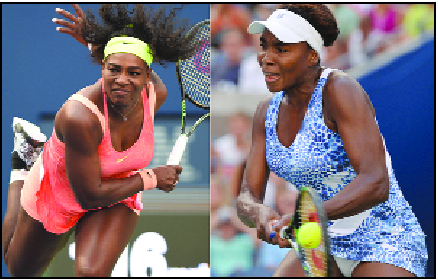 The Williams sisters proved once again that they are the biggest draw in tennis, regardless of gender, as they faced off in an emotional semifinals matchup at the U.S. Open this past Tuesday. Serena won the quarter-finals match 6-2, 1-6, 6-3 in front of a filled-to-capacity crowd.

Top seeded Serena and 23rd-seeded Venus showcased tennis at its best as they battled through three sets of the historic match. Serena is putting another stamp on a career that arguably puts her in the category of being the greatest female athlete ever. A U.S. Open victory would give her the first calendar slam since Steffi Graf achieved the feat in 1988, and it would also enable Serena to tie with Graf for the most Grand Slam titles in the Open Era at 22 a piece.

Less was on the line for Venus, but she was also working to build on her legacy as one of the greatest female tennis players ever. In the Open Era, Venus’ seven championships is tied for the eighth most wins, only one behind legend Billie Jean King and two behind Monica Seles.

The matchup turned into a star-studded affair, with the likes of Oprah Winfrey, Kim Kardashian, Donald Trump, and several other celebrities in the stands. The interest from the general public in this match went well beyond celebrity sightings. The ESPN telecast of the match brought in a 4.8 rating, which is the second highest that the network has ever had for a tennis match.

According to ESPN, 11 markets around the nation set records for tennis television ratings. It was also a record day for WatchESPN, (live online video stream), with 612,000 users totaling 44.8 million minutes viewed.

In the Los Angeles area, where the sisters hail from, many people on social media beamed with pride, posting “Straight Outta Compton” memes. Many people were also split on who to root for, as the Black community typically cheer on both women. The emotions people expressed were similar to what the sisters displayed on the court.

The match was competitive, with both sisters giving their all to defeat the other, but the match was more of a celebration of what these two great champions have meant to the sport.

While many were rooting for Serena because of the history that she was making, most people expressed that they would have been equally satisfied, if older sister, Venus, won and went on to win the entire tournament.

At the end, as both sisters hugged for what could be one of their final meetings in a Grand Slam tournament, Venus whispered to Serena “So happy for you.” Serena called their sibling rivalry “the greatest story in tennis.”