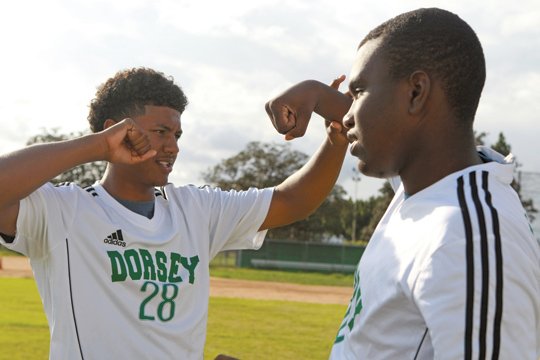 Malcolm Smith has a loaded schedule, which is why he wakes up at 4 a.m. to get his day started.

With dreams of becoming a professional baseball player, he hits the weight room first thing in the morning. Afterward, he studies some before he heads out to school at Dorsey, where he serves as the student body vice president.

In the fall semester, he includes cross country practice during his daily work out, and after that, he helps coach the school’s autistic soccer team. Smith does all of this while he prepares himself for college, with Southern University, Grambling State University, Lincoln University, and Bethune-Cookman University at the top of his list of prospective schools.

Smith started playing baseball as a child in the Tee-Ball division of the Baldwin Hills Little League. He quickly found out that if he was going to be good, he would have to work for it.

“I wasn’t the superstar kid, so I always had to work for mine,” he said. “It was a struggle at first. But I have a hard work ethic. I wasn’t born with it, but I was always trying to get better.”

As a senior, Smith believes that he has finally arrived.

Smith is a power and line-drive hitter, and out in the field he plays center, where he excels at tracking the ball with his quickness. He has lofty goals, but at the same time he is not a flashy player.

“I would like to be like Mike Trout, but right now, I’d say that I’m an athletic Evan Gattis,” he said. “I like that guy, because he’s raw. He’s a big dude, and I want to get big like that. He’s a power hitter. And I like the no batting gloves. A lot of guys wear them for style. I don’t have too much style. I’d say that I play the game simple.”

Smith stands at six-feet tall, and he is a pretty thick kid. As a power hitter, putting on muscle is important, which is why he hits the weight room for 90-minute workouts four times a week, which he splits between upper body, lower body and core. His father, who was a successful high school wrestler in Chicago, gives him a lot of tips.

Academically, Smith’s favorite subject is English, since he likes writing and reads a lot of non-fiction. He also likes to read financial literacy books, and he is currently reading “The New Jim Crow.”

He wants to major in business administration, with a concentration in real estate.

“When I get older, I want to be financially free,” Smith said.

The three baseball players ran for student government together, with the help of the players they coach on the soccer team. Smith is a very humble young man, who enjoys his interaction with the students who are affected by autism.