Diagnosis no longer a death sentence 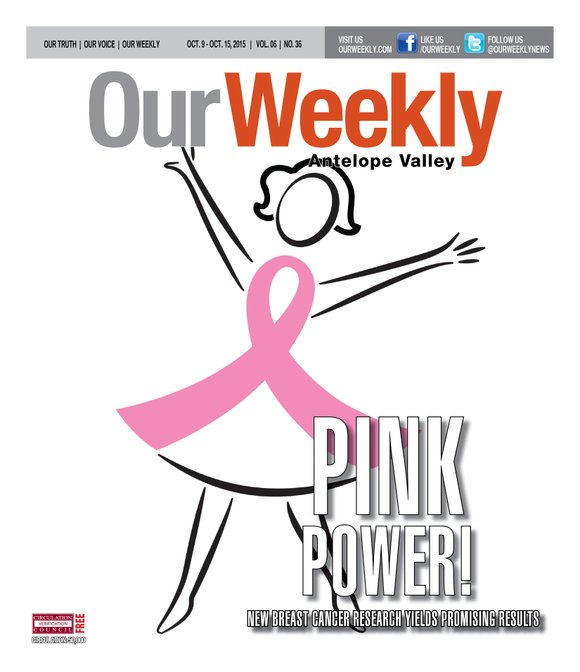 Each year promises new advancements in research and treatment of breast cancer. In 40 years, breast cancer has changed from an often fatal disease to one that most patients can conquer. October is Breast Cancer Awareness Month and scientists not only in America but around the world believe that the coming years will promise more progress in the ultimate fight to end the disease.

The American Cancer Society states that 90 percent of women with breast cancer are living at least five years longer, up from 75 percent in the 1970s. Mortality has decreased for every stage of the illness as improved, more widespread screening, research breakthroughs and dozens of new cancer-fighting drugs are providing women with a better chance of beating the disease and ultimately living and loving longer.

Research and treatment are evolving rapidly today. For instance, doctors can now test women for up to 17 genes involved in the disease. Based on a woman’s genetic risk, medical history and other factors, doctors can advise those at higher risk to have preventative surgery, take cancer-fighting medications, or undergo more frequent or more advanced screenings. Oncologists today are developing a clearer picture of each woman’s cancer risk by specifically tailoring screening regimens to each patient. They have discovered in recent years that women who have dense breasts (more fibrous or glandular tissue than fat) are reportedly 1.2 or 2 times more likely to develop breast cancer than women whose breasts are less dense. Researchers today are screening patients for cancer-causing mutations, and they can now genetically profile tumors. None of this was possible a generation ago, and once doctors can understand a patient’s genetic foundation, they can match drugs to the mutations.

Researchers know that once a particular cancer pathway is blocked, the disease will often choose another course and then mutate over time. Experts have discovered that screening patients’ cancer cells multiple times over the course of the disease has greatly assisted in tracking the formation of tumors long before they become malignant.

New cancer vaccines are being injected that help to prime a patient’s immune system to attack cancer cells. Although the treatments remain experimental, doctors say they show promise because they have increased cancer-free survival times with minimal side effects. These new vaccines are said to be available for those battling cancer as well as for survivors at increased risk of occurrence.

Breast cancer patients have more options today of taking medication to shrink their tumors before they enter an operating room. Barbara Haley, a medical oncologist at the University of Texas-Southwestern Harold C. Simmons Comprehensive Cancer Center, said the new treatments are “working wonders” in helping to avoid surgery and if it is needed, to better “pinpoint” the success of the operation.

“These treatments allow us to sometimes save the breast and to maximize the effectiveness of surgery,” she said.

There is also an improved fight against aggressive cancers. Some women whose breast cancer may be driven by high levels of estrogen are taking the oral drug tamoxifen, which has proven to prevent the hormone from binding to cancer cells. Tamoxifen, however, is generally used to help treat the cancer, but sometimes the cancer may grow resistant and return. That’s why doctors are turning more to two new drugs: afinitor (which slows the cancer cell growth) and another class of drugs called Cyclin-dependent kinase inhibitors. Both medications are said to delay or replace chemotherapy and have fewer side effects. “The introduction of these drugs is a really important step forward for the patient,” Haley said.

Then there are lifestyle factors, particularly weight gain after menopause that sometimes places healthy women at a higher risk for breast cancer. The latest research indicates that weight gain can raise the risk of recurrence in survivors. Haley offered a timely tip to help ward off this distress: Lose weight and exercise. “We continually counsel patients to stop smoking, maintain a healthy diet and that alcohol intake should be limited,” she said.

Today, biomedical engineers have demonstrated a “proof-of-principle” technique (evidence helping to establish the truth/validity of a study) that could give women and their oncologists more personalized information to help them choose options before treating breast cancer. New diagnostic tests are allowing clinicians and patients to know beforehand the type of breast cancer they’re confronting, but one big question remains: “how likely is it that the cancer will spread to other parts of the body?” Experts are looking to answer that question someday because it could help guide the choice of treatment options, from aggressive and difficult therapies to more conservative ones. By studying chemical signals from specific cells that are involved in helping cancer invade other tissues in each woman’s body, researchers have developed a more predictive model that could, one day, provide an invasiveness index for each patient.

New research is being conducted that may lead doctors away from breast cancer surgery. Two studies published this year in EBioMedicine have revealed new information about the effects of mutations in genes that lead to a very high risk of breast cancer. The research looked into the BRCA1 and BRCA2 genes both of which account for about 20 to 25 percent of all cases of hereditary breast cancer, and 5 to 10 percent of all cases of breast cancer. The studies touched on women carrying these genes being identified as “high risk” of contracting breast cancer and the option to have preventative surgery such as a double mastectomy. But sometimes surgery is not an option. Prof. Martin Widschwendter of University College in London was lead author of one of the studies and said some women simply won’t undergo preventative surgery because of the resulting radical change in their physical appearance.

Many myths about breast cancer

“Preventative surgery is quite a drastic measure, and we’re unsatisfied with the [current] situation,” he explained. “We want to prevent breast cancer from the beginning, and findings from our research are a significant step forward in demonstrating the importance of why further research is critical in this arena. Prevention without surgery is the ultimate goal. This study is the first proof of principle, thus we have identified a new target [preventing the disease at the early stages] we can now use to decrease breast cancer risk.”

The second study took place at the Keck School of Medicine at USC. In this case, researchers developed a new mouse model to make it easier to examine the influence of the menstrual cycle on breast cancer risk. Prof. Louis Dubeau and his colleagues engineered mice to carry mutations that corresponded to those affecting the BRCA1 gene in humans; the mutations were genetically engineered to occur in tissues associated with increased risk of cancer.

“We know that the menstrual cycle has an effect on the development of breast cancer and ovarian cancer, but we don’t yet understand the mechanisms behind it,” Dubeau said. “We wanted to develop a mouse model researchers could use to study ways of preventing breast cancer in women with BRCA 1 and BRCA2 mutations.”

Some breast cancer patients are curious about a specific medical procedure utilizing “titanium guiding clips”—also called “markers”—which for about 25 years have been used to mark the location of a suspicious area in the breast. They’re little clips—2 to 3 milimeters—and show up on X-rays and other images to help surgeons locate and remove breast tumors. The clip is removed during surgery. If surgery is not required, the clip remains. If a biopsy does not show breast cancer, the clip remains because doctors may rely on this implement during follow-up benign breast conditions.

It is a myth that everyone who gets breast cancer will die from the disease. With modern treatment, about 90 percent of women with early-stage breast cancer now live five or more years after diagnosis. Doctors caution that each case is different and that the average rates of survival vary greatly by the stage of cancer. Again, early detection is key to beating breast cancer. The Komen Foundation reports that there about three million breast cancer survivors in the United States, but more than 40,000 women (and a little more than 400 men) will die from breast cancer each year. The five-year relative survival rate for women with localized breast cancer (cancer that remains solely in the breast) is about 99 percent. For women with regional disease (cancer that has spread to the lymph nodes) this number drops to 85 percent. And for women with “distant” cancer (cancer that has spread to other organs), the five-year relative survival rate drops to 26 percent. Experts contend that all of these survival-rate figures are considerably higher than they were a generation ago because of advancements in pre-detection services, on-going treatment plans and new medicines that can extend the life of the patient.

Men can get breast cancer, too

It is myth that a second opinion does not make a difference. Most breast cancers grow slowly enough that taking time to meet with several doctors and consider the best approaches to treatment won’t affect survival. Bottom line, do not resign yourself to a death sentence. Instead, get a second opinion—and a third opinion if necessary—to fully take “ownership” of the situation and press forward with a treatment plan.

For decades women have undertaken their own breast examinations and sometimes they may find a lump. However, the National Breast Cancer Foundation says that it is a myth that finding a lump means you definitely have breast cancer. Only a small percentage of breast lumps turn out to be cancer. If you discover a persistent lump in either breast or notice any changes in breast tissue, it should never be ignored. See a doctor for a clinical breast examination.

Men can get breast cancer. Each year it is estimated that about 2,200 men worldwide will be diagnosed with breast cancer and more than 400 of them will die. Breast cancer in men is usually detected as a hard lump underneath the nipple and areola. Men carry a higher mortality than women do because awareness among men is far less likely and most men are unlikely to assume that a lump is, indeed, a cancerous tumor.

A mammogram will not cause breast cancer to spread. This chest X-ray is the “gold standard” for the early detection of breast cancer and fear by some women of breast compression while getting a mammogram—thereby causing a suspected tumor to spread—is another myth. The National Cancer Institute is quite resolute about disputing this misinformation: The benefits of mammography, however, nearly always outweigh the potential harm from the radiation exposure. Mammograms require very small doses of radiation; the risk of harm from this radiation exposure is extremely low.”

Breast cancer is not contagious. You cannot catch breast cancer or transfer it to someone else’s body. Breast cancer is the result of uncontrolled cell growth of mutated cells that begin to spread into other tissues within the breast.

The biggest aspect of conquering breast cancer is said to begin when the treatment ends. That’s according to Michelle Ochoa, a clinical social worker at City of Hope’s Department of Supportive Care Medicine. She said conquering “mental fatigue” during and after treatment is vital during the recovery.

“Breast cancer is more than a physical disease,” Ochoa said. “One of the most common themes I hear is the feeling they have lost control over their lives and their bodies. Even when treatment is finished, what seems like joyous time is often clouded with uncertainty, fear and doubt.”

Doctors, scientists and specific cancer researchers from around the world insist that regular exercise, a balanced diet, regular sleep habits, no smoking, limiting alcohol intake and being aware of risk factors can all be part of each women’s fight to prevent not only breast cancer but most other forms of illness. Following an early detection plan is said to be the best method of “ownership” in maintaining a healthy body free of breast cancer or any other type of potentially fatal disease.