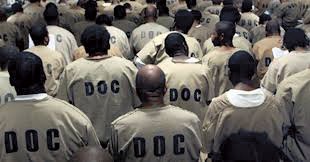 The holiday season is stressful enough for people having to deal with crowded shops and family members who don’t always get along gathering in their homes. But many Black families are faced with another level of holiday stress—loved ones serving long prison sentences.

According to figures from the NAACP, Black Americans make up about 1 million of the nation’s 2.3 million jailed population.

That is part because officials say the War on Drugs has caused mass incarceration for the Black community. Many men and women who got involved in drugs found themsleves convicted of long prison sentences. Consequently, many inmates have experienced multiple Thanksgivings and Christmases away from their families.

This is a problem that Keisha Downey, Ed.D., a licensed marriage and family psychotherapist based in Beverly Hills, has seen with many of her clients. Downey specializes in helping individuals, couples, families, and adolescents. She is also a resident treatment counselor on the VH1 show “Couples Therapy with Dr. Jenn Mann.”

“About 80 percent of my clients have reported having a loved one incarcerated at some point, which negatively impacts and disrupts the family and culture of the family,” said Dr. Downey. “Long-term incarceration can lead to different forms of emotional stress within Black families during the holidays such as excessive worry, constant grief, separation issues and anxiety, adjustment issues, depression, anger etc. Additionally, the thought of being incarcerated or what a person has to endure in prison can be considered emotional stress all by itself.”

“As a criminal defense attorney in Detroit, I was unfortunately very familiar with families that struggled with one or both parents being incarcerated for extended periods of time,” Lake said. “People often assume it is the father that is incarcerated, but it is important to remember that women– mothers—are in prison as well.”

According to the Sentencing Project Research and Advocacy for Reform, Black women make up 30 percent of the almost 1 million women currently incarcerated.

Downey suggests some coping skills to use. She recommends Black families try to maintain a relationship with their incarcerated family member, but also not to forget to take care of their own emotional well-being.

One way to do that is to try to visit. However, Downey cautions that visiting a loved one in prison can be traumatizing for family members, especially when they see what condition the person is in. That can be because family members listen to the loved ones experiences on the inside and can internalize those negative emotions and may begin to worry about their safety.

“It's best practice to help families express to each other on the outside how they are feeling about the loved’s one’s incareration to prevent internalizing negativity,”she said. “Also, finding ways to include their loved ones [in family activities] during the holidays such as being available to talk over the phone, sending holiday cards, letters etc. More importantly, implementing self care, in the form of sleeping [enough], eating healthy, and obtaining emotional support from other family members.”

One of the biggest problems for Black families dealing with long-term incarceration is how to handle the children. Many of these young peoople go long periods without seeing their parents, and eventually grow up on their own. The incarcerated parent is often forced to try to establish a relationship with their child who they may have last seen, when the person was a baby.

Downey said parent-child relationships with incarcerated moms and dads have to be handled very carefully.

“If family members are close and were used to their loved ones being around, it will be beneficial to continue building healthy bonds to form and maintain healthy relationships,” she said. “If a child has never met his or her father or mother, for example, then it might cause the child more harm since the relationship was never established to begin with.”

Lake said mass incarceration has particularly affected Black children, because so many African American mothers are caught in the criminal justice system.

“It’s very hard on the children; the parents know that they made a mistake, but the children do not always understand the parents’ actions and what the parents are being punished for,” Lake said. “The children are always the most affected and yet are the least aware of the long-term effects these situations can have on a family.”

According to Lake, some states have adopted prison policies to make life a little easier for families. Some states allow low-security prisoners to bond with their families on holidays. HOW

“Last year, a prison in Miami, Fla., hosted a father-daughter dance that was meant to encourage the men to be better for their daughters once they are released,” Lake said.

Downey said its critical that families try to maintain relationships with incarcerated family members because this helps prepare the individuals for the outside world, when they are eventually released. She said family members during visits can help introduce inmates to things people on the outside take for granted, like cell phones or setting up a social media account. They also show them how to apply for jobs when they get out.

“When there is no family relationship or support during incarceration, prisoners are not as prepared to handle what's to come,” Downey said. “They might not have a stable place or environment to reside at; they may feel isolated and unsupported, which can contribute to feeling inadequate, hopeless, and [may caue them to] resort to past behaviors that led to incarceration initially.”

According to the website Prison Legal News, 40 years of research shows that maintaining relations with families help reduce recidivism. A 1972 study found only 50 percent of prisoners who received no visits from family completed their first year of parole without being arrested. However, 70 percent of prisoner who had regular visits managed to stay arrest-free during their first year outside jail.