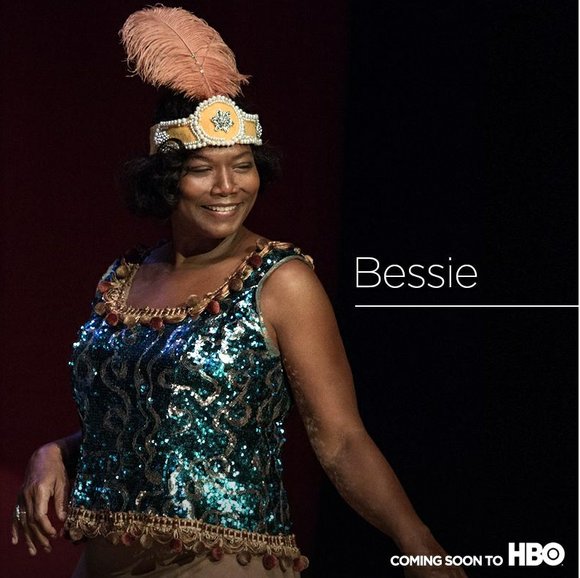 On Saturday May 16, HBO will premiere the highly anticipated drama “Bessie” starring the very versatile and talented Queen Latifah as the legendary Blues singer Bessie Smith. This may be Latifah’s most challenging role in her outstanding career. Queen Latifah says she worked with a singing coach who trained her to sing in Smith’s register.

In life, Smith was a “larger-than-life” woman, who embraced living with very few boundaries; all of that raw emotion will come across on the screen. The storyline also focuses on Smith’s relationships with both men and women and features Queen Latifah’s first onscreen nude scene.

“Bessie is taking inventory of her life and in that moment, all the armor comes off. The wig comes off, the makeup comes off and her clothes are off,” explained Dee Rees, the film’s director and writer. “The scene was about being truly honest with yourself and confronting yourself, so it was important for Queen Latifah to be nude.”

Rees said Queen Latifah “was brave” and had a discussion about the importance of the scene. “Like any artist, she needed to understand why it was there. It’s the most vulnerable that we see Bessie,” she said. “This scene is the turning point and the realization that she’s lost everything she loves the most.”

“This has been such a passionate project of [Queen Latifah’s] because Bessie was an artist who everyone can relate to,” Rees told Variety at the New York premiere. “So many things she experienced in her life resonate today. Bessie’s story is about self-discovery, it’s about love and also about how to love, and it’s about not letting any negative circumstance limit you.”

Reportedly “Bessie” was 22 years in the making, and Queen Latifah first auditioned for the part in 1992. The project went through a number of studios and was stuck in development limbo until HBO Films came on board.

A host of Black stars including Academy Award winner Mo’Nique starring as Ma Rainy will help bring Smith’s story to life. Mo’Nique said she had no idea who Rainy, the “Mother of Blues” was before she read the script, but she was determined to find her “essence.”

Ma Rainy, born Gertrude Pridgett on April 26, 1886, in Columbus, Ga., became the first popular stage entertainer to incorporate authentic blues into her song repertoire. She performed during the first three decades of the 20th century and enjoyed mass popularity during the blues craze of the 1920s. Rainey’s music has served as inspiration for such poets as Langston Hughes and Sterling Brown. As depicted in the film, Rainy was the first to give Bessie a break, and served as her coach, so to speak, on how to move and perform on stage.

Unfortunately, Bessie Smith is all too often remembered by her untimely death. If you expect to see her tragedy depicted, you won’t. Rees explains why, “I wanted to leave her with a win. People that don’t know Bessie, the one thing they do know is that she died in a car accident. I didn’t want to play into the sensation of that because to me, if you cover the car accident, you’ve got to tear down all that she’s accomplished in the last five minutes. I really wanted it to end on Bessie not as a tragic figure, but as a heroic figure. Her song, “Long Old Road,” shows her relentless optimism in the face of impossibility.”

Told with compassion and fire, make it a point to see this film, you won’t regret it.

“Bessie” premieres Saturday, May 16 at 8 p.m. on HBO. For more information, go to http://www.hbo.com/movies/bessie#/movies/bessie/interview/dee-rees.html.

Visit www.hollywoodbychoice.com for more on HBO’s “Bessie” and the real Bessie Smith. Also take a look at the 1929 movie short “Saint Louis Blues” on the site. W.C. Handy himself asked Bessie Smith to appear in the movie. Handy co-authored the film and was the musical director.

Gail Choice can be reached at gail@hollywoodbychoice.com.