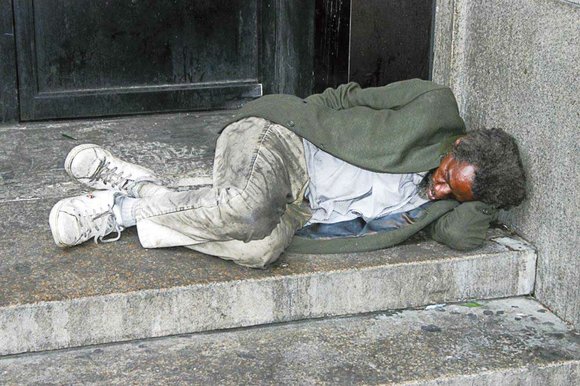 The number of homeless people living in a vast swath of Los Angeles County jumped by 16 percent over the past two years, according to figures released this week by the Los Angeles Homeless Services Authority.

The agency’s biennial Homeless Count, which was conducted in January and excluded the cities of Glendale, Pasadena and Long Beach, found 41,174 homeless people in the county, up from 35,524 in 2013. Despite the increase, the number of homeless veterans remained essentially flat, going from 4,007 in 2013 to 4,016 this year.

“The demand for homeless assistance has increased in Los Angeles and several recent studies have confirmed our region’s housing and affordability crisis,” said Peter Lynn, executive director of the Los Angeles Homeless Services Authority. “We are working diligently to target resources and interventions to create a sustainable, systemic infrastructure to house our homeless neighbors.

“No growth in veteran homelessness demonstrates the positive impact of increased federal and local resources to house homeless veterans, but shows a serious challenge of new veterans becoming homeless,” he said. “Los Angeles has housed 7,500 veterans since 2013, but we will need to increase that rate to end veteran homelessness.”

The homeless count, which was carried out thanks to more than 5,500 volunteers who fanned out across the county, found that nearly 29,000 homeless people were not in shelters. According to LAHSA, when Glendale, Pasadena and Long Beach figures are added, the county’s overall increase in homelessness from 2013 was 12 percent.

The issue of homelessness was thrust into the forefront by a pair of fatal police shootings of homeless men in Los Angeles—May 5 in the Venice area and on March 1 on downtown’s Skid Row.

“This is a combination of a policing issue and a homelessness issue,” Mayor Eric Garcetti said. “We’ve seen two incidents in which homeless individuals with a history of mental health challenges have lost their lives on our streets, and I think that we need to own that.”

A recent report found that the city spends as much as $100 million on homeless issues, but without a system for coordinating the programs.

“This year in my budget we have put 10 outreach teams to deal with mental health and other things in a county that only has seven total,” Garcetti said. “So we’re going to go to 17 just based on the city’s contribution to the Homeless Services Authority to be able to go out there and really interact with those individuals and try and get them off the streets and into continuing care.

“Despite complete slashes from the federal government and the elimination of affordable housing funds from the state, we put more money into our own affordable housing trust fund to build housing to get homeless people off the streets -- $10 million that we put in on top of the almost $20 million from last year,” Garcetti said.