Student Athlete of the week 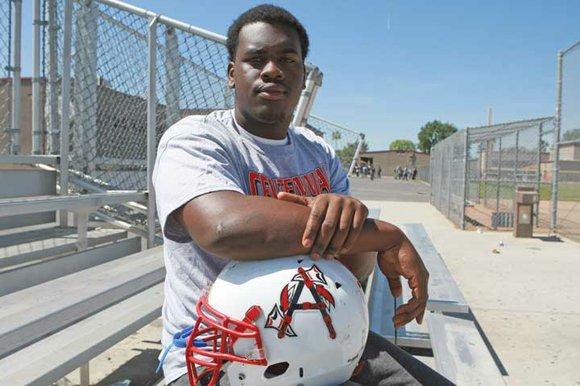 Deon Barney prepares himself for big moments. Whether it is tackling a ball carrier on the football field, grabbing rebounds on the basketball court, sprinting down the track in a big race, or taking an exam in the classroom, he’s a teenager who knows that he will do well because he worked hard in practice and stayed up late to study.

Barney understands that a lot of times in life, a person is defined by what they do not do.

“I study, and if I don’t, it shows up,” Barney said. “If I fall asleep that night and don’t study for a test, I’m not going to get the grade I want. If I don’t do my pushups or put in a little extra work in practice, I might not get that sack on Friday night. It always shows up.”

Standing at 6’3,” 240 pounds, the senior played both defensive end and offensive tackle on the football team, took on two other sports just to improve his athletic abilities and he has a 3.8 grade point average including taking AP classes.

Barney did not play the typical organized sports; he did not play Pop Warner football or AAU basketball. He comes from a close knit family that includes his mother and younger brother. He did not have much guidance when it came to sports, because his father passed away when Barney was six years old. He has two older brothers, but there is a 10-year gap between them.

Barney’s first taste of organized sports came at Bunche Middle School in Compton where he had some awkward moments on the football team.

“At the end of the first week of practice at Bunche, I asked when we were going to get our pads, not knowing that we were playing flag football,” Barney laughs.

Having limited knowledge of the game made playing difficult in the beginning, but sticking with the sport made all the difference.

“I just kept playing,” Barney said. “I just kept working and getting better. It didn’t happen over night. It happened gradually.”

At Centennial High School, Barney played his first year on the Junior Varsity team, and then became one of only two sophomores to start on the varsity team a year later. The transition was not exactly smooth, because playing in the trenches on the varsity level as a 10th grader is extremely difficult and physically demanding. At one point, he had to figure out if the sport was for him, and he answered that quickly.

Barney dedicated himself to the weight room and he made sure that he put in extra effort at practice.

“I kept to my work habits,” Barney said. “I kept working hard. I kept lifting weights. I kept running sprints. It wasn’t for him, but it was for me. To let myself know that I can do this.”

It wasn’t long before the coaches acknowledged that he was one of the team’s best players, and that he had a positive impact on a team that went to the semifinals of the playoffs.

Football is Barney’s main sport, but he took up basketball and track simply because he loves the grind.

As a student, Barney does well in all subjects, with history being his favorite.

“I like to be able to go back and touch on things, and know where my people came from,” Barney said. “And know how we all got here. It’s not just history back then, but history of today, and history of tomorrow. What’s going on today is important, and it mirrors what went on yesterday, and in years past.”

When Barney gets to college, he will decide between the majors of kinesiology and African American studies, and said he may major in one and minor in the other.

“I’m really intrigued by our culture,” Barney said. “As we can see today, a lot of young Black males aren’t able to see the age of 18, or do the things that I’m able to do. Remember that Trayvon Martin was a young football player, but he’s no longer with us.”

Barney has been academically accepted to San Jose State, and he plans to join the football team as a preferred walk-on, with the goal of becoming a scholarship athlete. As much as he loves sports, he understands that his education is the key.

“Sports is not the only way to go,” Barney said. “I’m not going to college on an athletic scholarship, I’m going to San Jose academically, so there is another way.”

Before heading up to Northern California, Barney has one more task to complete.

“I really want to make my mom proud,” Barney said. “I’m going to make her proud on June 4 by being the first one of her children to walk the stage and get my high school diploma. And I want to set a precedent for my (younger) brother.”