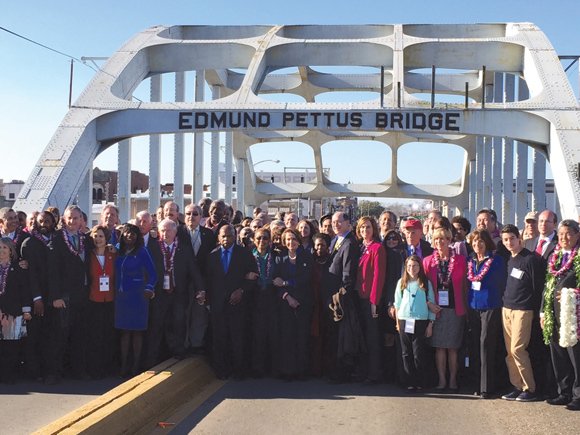 Congressional representatives Maxine Waters, Karen Bass, and Janice Hahn along with Supervisor Mark Ridley-Thomas were among the local elected officials from Los Angeles who went to Selma last weekend to celebrate the 50th anniversary of the Selma to Montgomery march and ultimate passage of the 1965 Voting Rights Act.

They joined an estimated 100 members of Congress, President Barack Obama, civil rights representatives and others in marking the historic crossing of the Edmunxd Pettus Bridge.

“I was honored to join religious leaders, civil rights icons and more than 100 members of Congress—both Republicans and Democrats—to commemorate the 50th anniversary of ‘Bloody Sunday,’ said Rep. Bass. “It was a powerful and moving experience to honor the courageous activists in Selma who marched in the face of hatred and called on Congress to pass the Voting Rights Act. We cannot forget their struggle, and we cannot forget that the fight to ensure that every American can vote is far from over.

“(Last) weekend was an important reminder that new voter suppression laws are still being introduced across the country. Democracy only works when each and every one of us can vote and basic American rights are upheld. The right to vote should not be a partisan issue and it’s time for Congress to act,” Bass said.

Supervisor Ridley-Thomas offered this comment: “Finding my way to Selma (was) a journey to a high point in Civil Rights history that I could not imagine ignoring. I [went] here for my own sense of commitment but also as a way of saluting those brave men and women who gave so much in order for us to enjoy the right to vote.

“Had it not been for Bloody Sunday, I doubt there would have been a Voting Rights Act,” noted Ridley-Thomas. “That form of brutality set in motion a truer democracy in this land. It was a watershed moment in the history of Civil Rights in this nation.”

Rep. Maxine Waters offers her thoughts: “. . . though it’s important to remember this movement every year, given the recent erosion of voting rights and other hard-fought civil rights victories, this year’s events have an even greater significance. After the many gains following Bloody Sunday, there is still work to do and challenges to address.

“Fifty years since the events on the Edmund Pettus bridge, we find ourselves still fighting to preserve voting rights, as we confront a deluge of voter suppression efforts in many states. Since the Supreme Court’s devastating decision in Shelby County vs. Holder, state legislatures across the nation have chipped away at the progress these Selma protesters fought so hard to achieve. To date, 33 states have introduced a total of 92 bills to restrict voters’ access to the polls. In 2014, voters in 22 states faced tougher voting requirements in the most recent midterm election. Bolstered by the Supreme Court’s decision and Congress’ failure to act on voting rights, these states faced no repercussions.”

Waters continued: “Although literacy tests are a thing of the past, state statutes that limit early voting and registration, require voters to show photo I.D., and purge voter rolls still disproportionately affect poor and minority voters. While the nation has indeed changed since 1965, we must remain as vigilant as ever against more subtle forms of discriminatory laws that have a disparate impact on vulnerable communities and protected classes.”