'Emotional' robot sells out in a minute 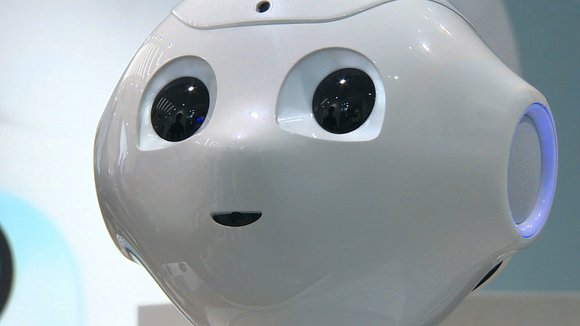 Pepper the humanoid robot is so hot that he sold out within a minute, according to his Japanese creator, SoftBank Robotics Corp.

Standing just under four feet tall, and weighing 61 pounds, Pepper is designed to read emotions as well as recognize tones of voice and facial expressions in order to interact with humans. But most of all, "he tries to make you happy," Kaname Hayashi, Softbank's project manager, told CNN last year.

With his array of cameras, touch sensors, accelerometer and other sensors in his "endocrine-type multi-layer neural network," Pepper has the ability to read your emotions as well as develop his own. He isn't a work robot, but more of an emotional companion for people.

Pepper has his own evolving emotions which "are influenced by people's facial expressions and words, as well as his surroundings," according to SoftBank. "Pepper is at ease when he is with people he knows, happy when praised and scared when the lights go down."

Developers admit that the robot may make mistakes, but says Pepper will learn and grow over time through his own emotional engine and collective wisdom gained through collected cloud data.

Pepper currently has the ability to speak English, French, Japanese and Spanish. In the next few months, there will be more language releases in its app store, which already has around 200 apps.

The business side of Pepper

Two days prior to Peppers initial limited release, SoftBank announced a new partnership with the Apple manufacturer Foxconn and the Chinese e-commerce giant Alibaba, which each agreed to invest ¥14.5 billion (over $118 million) for 20 percent shares in SoftBank Robotics Holding. SoftBank envisions Pepper as a first step in spreading robotics worldwide.

Softbank is willing to sell Pepper at a loss for the first four years, but expect the robot to bring in profits by the fifth year and become a major force in revenues 20 to 30 years in the future. Company officials stated that they want to keep Pepper affordable, and compared the price of the robot to that of a pet dog in Japan, according to a press event held last week.

SoftBank also plans to launch "Pepper for Biz" in the fall, making the robot available for businesses and will announce details in July. Pepper has already been used to sell Nestle coffee machines in Japanese stores.

Interested in buying your own Pepper robot? SoftBank will be releasing information about additional sales on their website in July.