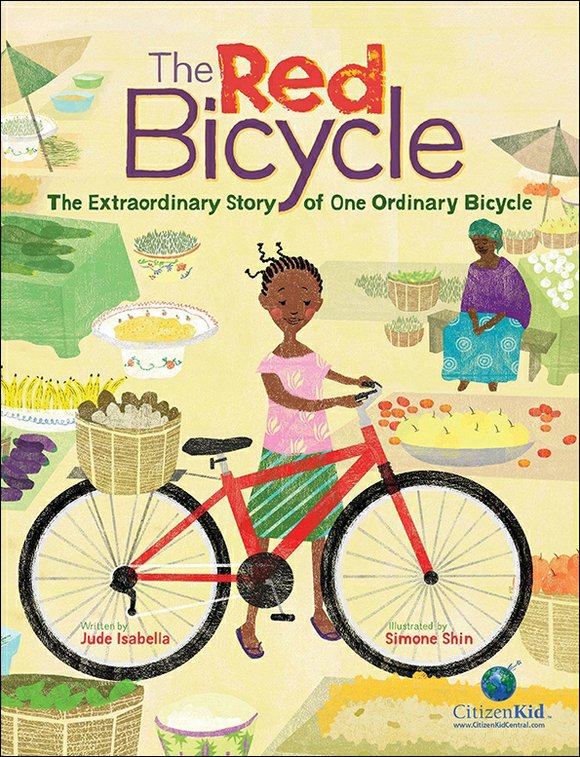 Last years’ swimsuit is way too small for you now.

You’ve outgrown most of your summer clothes, in fact, and you’ve given them away;

you can’t wear them anymore, so someone else may as well use them. But clothing isn’t

the only thing you can hand-me-down. In the new book “The Red Bicycle” by Jude

Leo had been saving his money for two entire years. Every time someone gave him

money, he put it in the bank because there was one thing he wanted more than anything: a

shiny red bicycle that sat in the bike shop. Once he had enough saved, he bought the bike

and named it Big Red.

Big Red took Leo everywhere. They went to school and to the park and to work, until the

day when Leo was too tall to ride his bicycle anymore. He needed a bigger bike and,

knowing that he wanted to do something special, he donated Big Red to a program that

sent his bike to Africa.

Almost a month later, near the coast of Ghana, Awa Sawadogo took her granddaughter,

bikes with fat tires. Though she’d never ridden a bicycle before, the one Alisetta wanted

was red. Once she learned to ride it, it was perfect for getting to around – until the day a

village pig ran into the bike and there was no money for repairs.

A broken bicycle was no problem for Boukary, a health-care worker at a nearby clinic,

who told Alisetta that her bike would make a sturdy ambulance. He carted it away,

repaired it and gave it new paint. Then he added a long trailer on the back of the red

bicycle and put it to work.

At the hospital, Haridata, a volunteer, set off on the red bicycle to fetch a sick little boy

who was brought back for treatment. Over the years, she became “a legend in the villages

around the clinic,” both for her care and for her bicycle.

And today - who knows? The bike that the village children called “Le Grande Rouge”

Is getting rid of a long-loved (but quite outgrown) possession a challenge in your house?

At the end of this book, author Jude Isabella and illustrator Simone Shin give parents and

teachers more information: additional books they can read on this subject and, more

importantly, information on donating your child’s outgrown bike to a good program. Kids

will also see photos of refurbished, donated bikes in action, and they’ll learn how to help

people half a world away.

While you certainly could read this book to a toddler, I think it’s a better choice for

children ages 9-to-13. Give them “The Red Bicycle” for a lesson they’ll never outgrow.

“The Red Bicycle: The Extraordinary Story of One Ordinary Bicycle” by Jude Isabella,