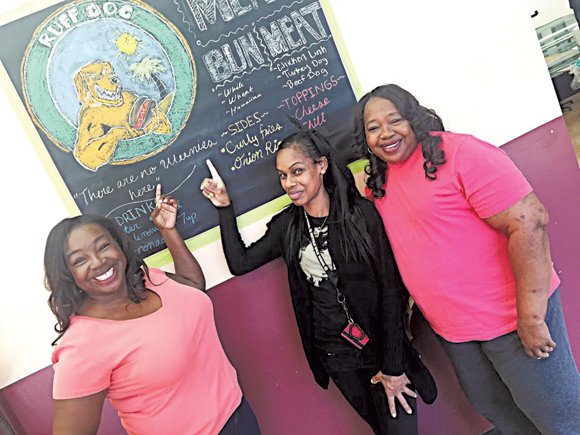 Most students sit through high school often wondering how the information they’re learning is going to help them in the future. That was not the case recently for students from Dorsey High School in Los Angeles. Students in the School of Business and Entrepreneurship (SBE) took part in a 16-week Buffalo Wild Wings (BWW) course that showed them how to launch and operate a restaurant. At the end of the program, the students operated a “pop up restaurant,” called Ruff Dog. The SBE is one of three academies at Dorsey and the curriculum integrates business principles and partners students with local companies to teach them about entrepreneurship.

Ruff Dog attracted more than 400 patrons and generated in excess of $2,500 in profits, according to Karim Webb, who with his partner, Ed Barnett, taught the Buffalo Wild Wings course. The pair are the owners of PCF Management which operates three Buffalo Wild Wings outlets in Baldwin Hills, Torrance and Carson.

PCF Management was founded in 2007, by Barnett and Webb, who were childhood friends. Barnett comes from a financial services background, while Webb is a 25-year veteran of the restaurant industry. The partnership has not only created a successful business empire, but has also sponsored several philanthropic activities in the community. In 2014, Webb received Black Enterprise’s Small Business Award for franchise company of the year.

“Part of our mission is to be a good community partner, provide job training and employment opportunities to the young people in the areas we serve,” said Barnett. “By partnering with the Dorsey High School of Business and Entrepreneurship and the Urban League we can move forward in fulfilling that mission.”

The SBE and BWW restaurant training program presents students with a hands on, individual experience which provides them with new opportunities to help them in their future careers. Graduates are also eligible to enter the PCF Restaurant Management Training Program. The Los Angeles Urban League also supported the program by offering the students help with their resumes, uniforms and helping them prepare for interviews.

“Once Ed (Barnett) told me about what he planned to do at Dorsey High, I knew it was a great opportunity for the Urban League to lend a helping hand. We are all about aiding our community, and this new program is a great fit,” said Nolan V. Rollins, president and CEO of the Los Angeles Urban League.

Webb said the 29 students in the program learned practical skills about launching and opening a restaurant business. They also did market research, determined what kind of restaurant it was going to be and even designed the logo.

“They (the students) learned what it takes to be a successful business,” said Webb, who learned valuable entrepreneurship lessons from his parents who owned a chain of McDonald’s restaurants. “They also have a better understanding of what goes on behind the scenes (of a business.)”

Webb said he was motivated to teach the class because he wanted to give back to the community and educate students about new ideas and opportunities. He pointed out that about half of the students in South Los Angeles don’t graduate from high school.

“Our goal is to impact students and expose them to ideas,” he said.

According to Webb, the program exceeded the students’ expectations and judging by their comments, they were very impressed.

“The new entrepreneur program is pretty cool. It’s new to me because of the way they teach and how everything is playing out is more like an internship instead of school,” said Alexis Ramirez, a SBE student.

Dorsey High School student DaRell Johnson said the program is an invaluable opportunity. “This program is a great experience,” he said. “The skills and knowledge that are given to us could never be taught somewhere else.”

Students graduated from the SBE Academy on May 30.