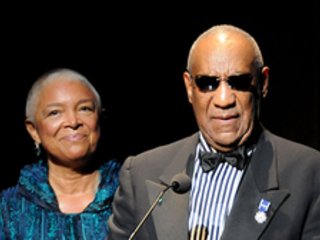 A report that Camille Cosby is standing firmly by her beleaguered husband has folks talking.

The New York Post reported over the weekend that Cosby was aware of claims that her husband, Bill, had been involved with other women and has been working hard to clean up the public relations mess that has ensued. Cosby has been accused by several women of drugging and sexually assaulting them, claims he has consistently denied.

The Post story, which is based on unnamed sources, comes after the news that Bill Cosby admitted getting prescription Quaaludes to give to women he wanted to have sex with, according to a 2005 deposition. Civil lawsuits have been filed, but Bill Cosby has not been charged with any crimes. The Post did not speak to Camille Cosby for its story.

Social media was abuzz this weekend with debates over what his wife knew and how she could continue to support her husband in the midst of the controversy.

On Twitter, users' descriptions of Camille Cosby ranged from "the original ride or die chick" to "willfully blind."

In December, she released a statement in support of her husband of 51 years.

"A different man has been portrayed in the media over the last two months," she said. "It is the portrait of a man I do not know."