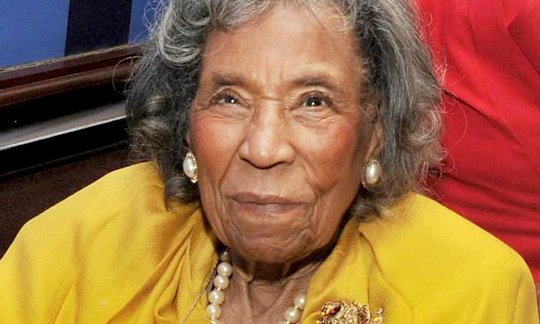 Amelia Boynton Robinson, the civil rights activist who was almost beaten to death during the “Bloody Sunday” march in 1965 in Selma, Ala., and the first African American woman to run for Congress in Alabama, died early Wednesday at age 104.

Boynton, as she was popularly referred to, was among those beaten during a voting rights march across the Edmund Pettus Bridge; state troopers teargassed and clubbed the marchers as they tried to cross the bridge. A newspaper photo that showed Boynton lying on the pavement unconscious help to draw worldwide attention to the civil rights movement.

This year, in commemoration of the 50th anniversary of the march, President Barack Obama pushed Boynton across the bridge in a wheelchair. In January, she attended the State of the Union address as a special guest of Alabama Rep. Terri Sewell who said Boynton’s 1964 run for Congress paved the way for her. Sewell, a Democrat, is Alabama’s first elected Black congresswoman.

“Mrs. Boynton Robinson suffered grave injustices on the Edmund Pettus Bridge in Selma at the hands of state troopers on Bloody Sunday, yet she refused to be intimidated,” Sewell said. “She marched with Dr. Martin Luther King, my colleague John Lewis and thousands of others from Selma to Montgomery and ultimately witnessed the day when their work led to the passage of the historic Voting Rights Act of 1965.”

Boynton’s role in the Selma march was reprised in the movie “Selma” where she was portrayed by actress Lorraine Toussaint.

“The truth of it [civil rights] was her entire life,” said her son Bruce Boynton of his mother’s role in helping to shape the civil rights movement. “That’s what she was completely taken with. She was a loving person, very supportive—but civil rights was her life.”

Boynton was born in Savannah, Ga., and worked as an educator there and with the U.S. Department of Agriculture in Selma. She educated local residents on food production, nutrition, healthcare and more. In 1965, she was an invited guest of President Lyndon Johnson at the signing ceremony for the Voting Rights Act.

President Obama said of Boynton, “She was strong, as hopeful and as indomitable of spirit—as quintessentially American—as I’m sure she was that day 50 years ago. To honor the legacy of an American hero like Amelia Boynton requires only that we follow her example—that all of us fight to protect everyone’s right to vote.”

Boynton had been living in Tuskegee, Ala., and was hospitalized in Montgomery after suffering a major stroke in July. She turned 104 on Aug. 18.

Tuskegee University officials said Boynton graduated from the school in 1927 and in recent years donated much of her personal memorabilia and papers from the 1950s and 1960s to the university.

One of her most famous quotes came in 2012, when she was addressing a group of young civil rights activists, some of whom said they stood on hers and others “shoulders” in reference to the standard bearers of the Civil Rights Movement. Robinson said she would prefer that the young generation of activists “... get off my damn shoulders” and get busy carving their owns paths to opportunities and freedom.

Funeral arrangements for Amelia Boynton Robinson are pending. Her son Bruce said the family is planning events in his mother's honor in Tuskegee and is also working to arrange a ceremony at the Edmund Pettus Bridge on Sept. 8.