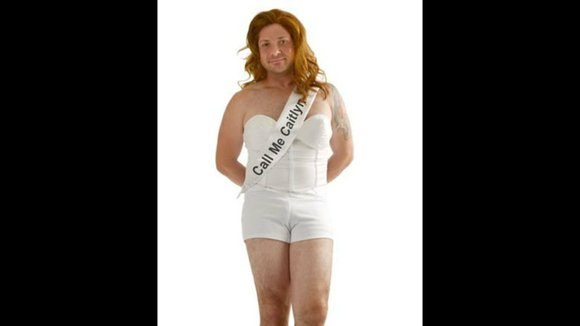 Halloween is a long way off but one costume already has emerged as controversial.

Critics say the costume mocks the transgender community and promotes transphobia by reducing Jenner to a stereotype. An online petition singles out pop-up store Spirit Halloween and urges the retailer to stop selling it.

"Do not turn Caitlyn Jenner into a costume. Your profit will only lead to greater transphobia and marginalization of an already at-risk community," the petition says.

The retailer has no intention of pulling the costume from stores or its website, Spirit Halloween spokeswoman Lisa Barr said.

"At Spirit Halloween we create a wide range of costumes that are often based on celebrities, public figures, heroes and superheroes. Caitlyn Jenner is all of the above and our Caitlyn-inspired costume reflects just that," Barr said in an email.

Though it might be possible in a limited context to don the costume in a tasteful way, that's not likely to happen, transgender advocates say. Here are some reasons they say it's offensive:

The costume reduces Jenner to a caricature

Spirit Halloween and WholesaleCostumes.com are known for selling humorous, tongue-in-cheek costumes, from pizza slice to one-night stand. Others costumes, like sexy noble Indian sweetheart or down for the count, might be considered controversial or tasteless.

WholesaleCostume.com's "Unisex Call Me Caitlyn" lives in the "humorous" section of men's costumes, along with Sock Monkey, red beer pong cup and other costumes meant to "surprise people with your great sense of humor," according to the category description.

Jenner's inclusion in such company is a clear mockery, said Kris Hayashi, executive director of the Transgender Law Center.

"It's really clear that the costume is meant to make fun of Caitlyn and transgender people by putting it under the category of humor," Hayashi said.

And, for those in the transgender community lacking Jenner's financial security, reality is anything but humorous.

"We're in a moment of ongoing violence and crisis in the community," he said. "It's a real affront to the community to think you can make fun of transgender people and go to a party dressed like Caitlyn when we're struggling to survive on a daily basis."

The transgender community is still marginalized

Transgender visibility in popular culture goes a long way in fostering greater acceptance. But the transgender community still faces disproportionate barriers to employment, education housing and healthcare compared with the general population, according to the National LGBTQ Task Force.

Transgender people are twice as likely to be unemployed and four times more likely to live in extreme poverty, which means a household income of less than $10,000, according to the Task Force.

Consequently, they are especially vulnerable to violence. So far this year, 13 transgender women have been killed because of their gender identity, according to the Task Force, which launched a public education campaign to end anti-transgender violence called #StopTransMurder.