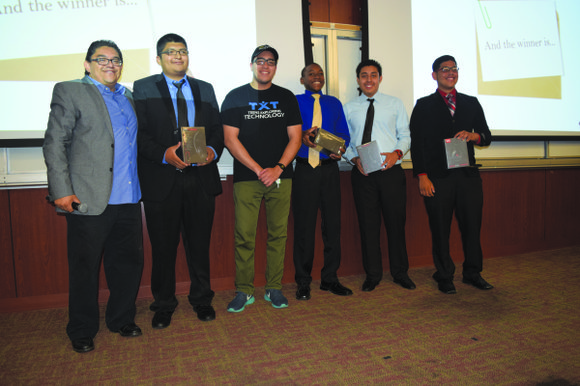 While many in South Los Angeles have spent the last few weeks worrying about the drama that has gripped the community with reports of murders, shootings and a gang vendetta, a group of 33 middle and high school young men have spent that same time and longer learning to think like a technology entrepreneur.

On Aug. 1 during the fifth Teens Exploring Technology Demonstration Day held at USC’s Salvatori Computer Science Center, these young South L.A. students, ranging in age from 12 to 17 years old got the opportunity to show off what they had learned during a six-week summer computer academy to friends, family and a collection of tech entrepreneurs who rated their “pitches.”

At the end of the competition, a team consisting of 12-year-old Brandon Lockheart, 15-year-old Eduardo Jerez; Shawn Orellana and 17-year-old Jonathan Marcelino of the team Chansu squeaked by the other seven teams to win $2,000 in seed funding, a Dr. Dre Beats collection as well as a trip to Silicon Valley to meet with tech entrepreneurs.

“This team had an amazing mission to improve and make their community better,” explained Larry Ervin, a venture capital investor who previously worked at Google and also served as a judge for the event.

The trio created an app that allows people to post problems (such as potholes) happening in their community, and each month people vote on which needs are the most pressing. The results would then be forwarded to the appropriate elected official. The team is now in the process of trying to set up an appointment to meet with 9th District Councilman Curren Price to discuss actually putting the app into practice.

The second-place winner, whom Ervin described as running neck and neck with Chansu, featured an app called Tag City that gives graffiti artists an opportunity to find walls where the business owners have given emerging artists permission to put up their work. This team won a Hulu product packet and a trip to Silicon Valley.

The third-place winner, Pocket Scout, which is an app that helps talented high school athletes—who often are not scouted by college coaches—put their profiles in front of college coaches. The group also won the people's choice award. The quartet of 15 and 16 year olds on this team (Generis) will also take a trip to Silicon Valley to talk with tech companies.

Demo Day is a five-year-old program operated by the organization Teens Exploring Technology (TXT) that introduces local young African American and Hispanic males to what it takes to develop and build a tech company. Then youngsters get the opportunity to pitch their ideas to people like this year’s crop of judges: Ervin, Suzy Ryoo, a venture partner with Atom Factory; Adam Kanner, co-founder of Scorebig, a venture-funded New York-based company; and Jessica Vernon of the USC Iovine and Young Academy (the Arts, Technology and the Business of Innovation.)

Operated on a budget of $150,000 to $250,000, the eventual goal is to raise $1 million to replicate the program around the country, says founder Oscar Menjivar.