Activists gather at downtown contruction site to call for jobs 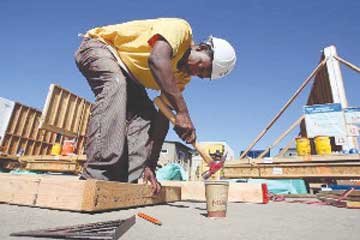 Activists gathered at the construction site of a downtown apartment project Wednesday to call for greater job opportunities for Black workers, especially through more and better-enforced labor agreements aimed at increasing diversity in hiring.

Members of the Los Angeles Black Worker Center formed a "prayer circle'' at the Hanover Company's 1000 Grand Avenue construction site to call attention to what they believe is a lack of Black workers on the project.

Hanover officials did not immediately respond to requests for reaction to the group's assertions.

Four percent of workers on the project are Black, even though the Hanover Co. has received subsidies from the city, according to the group.

Center officials said their findings are from the latest of a series of quarterly reports the group plans to release as a way of helping the city and public officials enforce pro-diversity hiring policies.

Lola Smallwood-Cuevas, the center's founder, said the reports and other efforts to monitor hiring practices represent community efforts that arose out of an absence of stronger enforcement.

"We shouldn't be monitoring this—it should be the city,'' she said.

She said the Los Angeles Black Worker Center looked at hiring data on three Metro projects, including the Crenshaw Line extension to LAX, and deployed volunteers with construction experience to chronicle the demographic makeup of workers at the 1000 Grand Avenue project site.

Diversity in hiring at the Crenshaw Line project is especially important because it is being built in areas where communities are between 60 to 80 percent Black, Smallwood-Cuevas said.

The group said it considers the Crenshaw Line job site diverse if its has 25 percent Black workers, while the threshold for other job sites across city is about 10 percent.

The Black Worker Center report cites what it called stubbornly dismal job prospects for Blacks nationally, with twice as many out of jobs as Whites, which is no better than it was in 1963.

In Los Angeles, the unemployment rate for Blacks is 18 percent, while one third of Blacks earn less than $12 per hour, according to the report.

The group's members and supporters later discussed the report outside City Hall and delivered a petition to City Council members and Los Angeles Mayor Eric Garcetti's office asking city leaders to set up an office that enforces policies aimed at increasing diversity in hiring.

Loretta Stevens, co-director of the Los Angeles Black Worker Center, said the group is "calling on the city to live up to the banner of the most diverse city in the nation, and the mayor to put into practice his vision of an equity agenda in Los Angeles by establishing an Office of Labor Standards and Enforcement ... to monitor projects and vigorously enforce anti-discrimination laws."

She added that "all employers need to recognize thB black job crisis and do something."

"It's not rocket science. Stop excluding,'' she said. "Up your numbers of Black workers and do the right thing. Look at your workforce. Who's missing? Is everybody at the table? Is it representative of our diverse city? If it's not, do something about it."

Although the Black Worker Center sees the Metro line contruction as being more diverse than other projects in the city, local Black contractors feel they are being unfairly excluded from work those projects, including the Expo and Crenshaw lines. This was repored by the head of a group of minority workers Monday, in announcing the filing of a lawsuit against the county, the transit agency, and numerous other contractors.

“Everybody’s being hurt by this, but nothing to the degree of Black folks,” Drexell Johnson, founder and executive director of the Young Black Contractors Association, said during a news conference in front of the downtown County Courthouse. Latinos and women also are being denied jobs, he said.

Johnson filed the lawsuit Wednesday in Los Angeles Superior Court and is acting as his own attorney. The complaint alleges a breach of the covenant of good faith and fair dealing as well as a violation of the state Business and Professions Code.

The lawsuit, which seeks unspecified damages, alleges that decisions by Metro officials in awarding construction contracts were shaped by “special payoffs through the use of special fundraisers that were designed and in fact did influence Metro’s governing body.”

A Metro spokesman did not immediately reply to a request for comment.

Johnson contends that many of the contractors chosen to work on Metro projects are based in other states and that workers living in Los Angeles and available to do the jobs are being overlooked.

“Our kids are going to school hungry because we’re not working,” he said.

Johnson alleged promises are often made by Metro to Black contractors, but they are rarely kept. He said various politicians, both Black and White, will be the subject of recall efforts for not doing enough to help get jobs for Black contractors.

He charged that other Black groups, including the Urban League, also have shirked many of their responsibilities to help local Black contractors.

He said the lawsuit was filed a last resort.

“We didn’t want to have to do this,” Johnson said.