The business of Black media 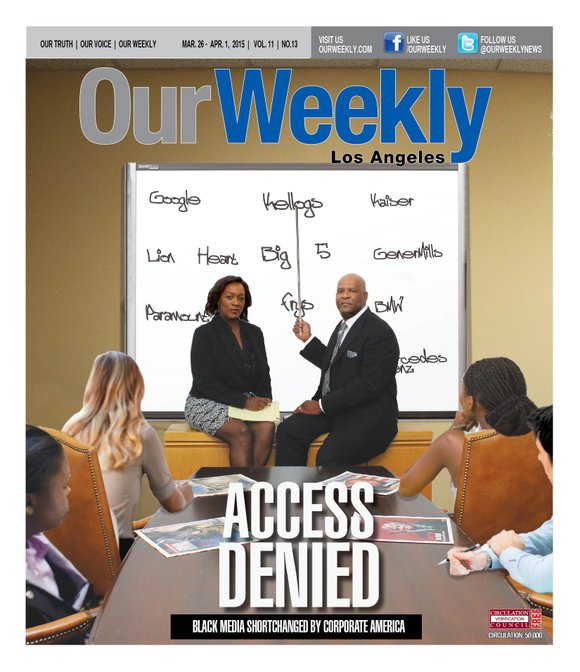 While most people who think about Black media consider its historic role as a leader and purveyor of the needs, wants and desires of the African American community, those same people sometimes forget that at the very foundation of newspapers, magazines, radio and television stations owned by African-descended people are some fundamentals—these entities are businesses that in order to exist, must make money.

For years, this has been the struggle with Black media which often seems to be left out of the loop when it comes to advertising. This is despite the studies that highlight the wealth in the Black community and aside from the well-known fact that Black people utilize Black media.

According to a recent Nielsen study, African Americans represent about 14.4 percent of the nation's population, yet only 2.6 percent of the major media advertising is spent on African American media. In numbers, the Neilsen report noted that advertisers allot only 3 percent of their $2.2 billion yearly budget to media aimed at Black audiences, despite the fact that according to “The State of the African-American Consumer Report” Black buying power in America is expected to hit $1.1 trillion this year.

The Nielsen Company also teamed up with the National Newspaper Publishers Association (NNPA), a trade group representing 200 Black community newspapers, for the third consecutive year to produce the report, “Resilient, Receptive and Relevant: The African American Consumer 2013,” which noted that the buying power of Blacks likely will increase from its current level to $1.3 trillion by 2017.

And yet, even with these projections, Black media does not garner a fair share of corporate ad spending, but instead is circumvented for ad buys in general market media channels.

There are other indicators that point even more clearly to the problem.

Allen joined with the National Association of African-American Owned Media (NAAAOM) for the action, in which he accuses corporate America and these three companies [Comcast, Time Warner and AT&T], in specific, of paying off civil rights activist Al Sharpton as well as other organizations to sign-off on their diversity spending efforts. He has also filed a $10 million lawsuit against AT&T.

The entrepreneur is also suing former FCC commissioner Meredith Attwell Baker and pointed out that months after she voted to approve a merger, she took a high-paying job with Comcast. He wants the lawsuit to turn the spotlight on how this happened.

In a broadcast report on CNN, Allen accused the corporations of giving money to Sharpton to avoid having to support the broader Black press.

“This is a historic lawsuit,” said Allen. “It’s about economic inclusion . . . We don’t need charity. We don’t need people speaking for us. Just do business with us.”

According to Allen, there are numerous people who have gone to Comcast looking to start up a cable channel but they have essentially told these individuals to go away. The Los Angeles media entrepreneur said he has seven cable networks on Verizon. He also noted that the Black Family Channel was turned away from Comcast and told it would have to pay $10 million to be part of the cable station’s platform.

Allen said ultimately, he is seeking to have some of the $50 billion Comcast and AT&T spend on licensing cable networks spent on 100 percent African American owned channels, and until that happens his aim is to stop the mergers the two companies have in the works.

“What Black America needs to understand is that as far as Civil Rights goes there are two ways—through legal actions and economic pressure,” Allen said. He is working hard to make sure the mergers are not approved until the issue of economic inclusion for all Americans, particularly African Americans, is addressed.

Allen believes the message is being heard. He has met with representatives of the FCC and more meetings are planned.

“We are being heard in the White House,” said Allen who declined to say specifically how he knew this. “We have our ways.”

In another legal action where Blacks were one of the key targets, the Black media also lost out. In this case, when the Justice Department and a coalition of anti-tobacco groups reached a settlement with the three largest American tobacco companies in 2014, anti-tobacco advocate LaTanisha Wright discovered, to her dismay, that Black media was totally excluded from the requirement to include “corrective statement” public-service advertisements about the negative health effects of tobacco, and the admissions that the companies knowingly lied about the health consequences of the use of the products.

These ads were supposed to run in more than 600 newspapers around the country and on three TV networks.

African American media were totally excluded from the deal.

The National Association of Black Owned Broadcasters (NABOB), the NNPA, and the NAACP filed a brief requesting that Black advertising media be represented in the corrective advertising. The courts have now agreed to include “some Black newspapers” into the settlement, however, the selections of papers are not in heavily populated metropolitan areas, but instead more rural outskirts.

Situations such as the latter are at the crux of what Our Weekly Publisher, Natalie Cole, calls the “sustainability factor” for Black newspapers.

“Black publishers face the most significant challenges on the revenue front. That is, selling enough ad space to pay the bills and to afford reinvestment opportunities back into the entity. Advertisers want legitimate high numbers in terms of circulation that is targeted to the demographic it wants to reach, yet when they are pitched for ad schedules and commitments, Black publishers are often shorted on the level of spending corporate players are willing to commit. There are only a handful of corporations who are visibly supportive of Black media outlets,” said Cole.

She added, “the lion's share of corporate players whose goods and services are regularly acquired by Black consumers, our readers, do not reciprocate when it relates to investing in Black communities through the usage of its media of choice—the Black media.

“While these corporate players depend on a significant percentage of Black dollars to drive their profits,” continued Cole, “they spend little to nothing in Black communities, and we as Black media, often times, can not even get access to present to the decision makers. The following industries/categories do not have a fair Black media ad spend in mind when mapping their budgets—all film/movie studio houses such as Paramount; name brand house-hold product makers such as General Mills; pharmaceutical companies such as Pfizer; hospitals such as Kaiser Permanente, high-end automotive makers such as Mercedes Benz and BMW; retail giants such as Sears, Target, and Home Depot.”

These are just a few of the corporations, added Cole.

"We have been in this market for 10 years with a steady distribution and continued growth and yet we still struggle just to get our foot in the advertiser’s doors. Our readers are loyal users of so many of the items corporate America produces, which is evidenced by the dollars we spend as a whole, and yet when it come to reinvesting, Black media is not utilized as the vehicle to deliver their corporate messages or their calls to action.”