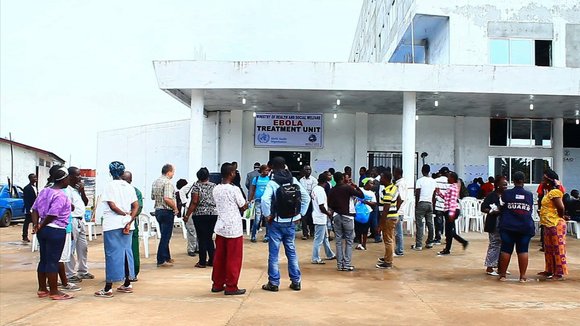 On the day the new Ebola clinic in Liberia opened, ambulances waited outside. Inside the ambulances were desperately ill patients who had come for treatment but instead would be left to lie on the ground as others walked by.

The Island Clinic and its 120 Ebola treatment beds opened to fanfare Sunday afternoon, with a ceremony attended by international health officials and Liberian leaders. But the clinic, located on Bushrod Island near Monrovia, the capital, did not appear to be ready for the number of patients that quickly flooded its doors.

Some lay motionless on the floors of the ambulances outside the center, too weak to get out. They had traveled for hours after being turned away from other hospitals in the area. No one from inside the hospital arrived to offer assistance.

One man opened his eyes weakly.

"Try to come down and walk a little," a worker told him.

But he summoned his strength and got out of the ambulance -- and immediately collapsed on the ground.

A little boy tried to walk out of another ambulance, but he too collapsed.

The two lay on the rocky ground just a few feet apart. The boy was completely naked and the man was naked from the waist down -- Ebola patients often don't wear pants because of the intense diarrhea caused by the virus.

"Get up and go inside," workers told the boy. "You'll only get food if you go inside."

"Let him rest," another worker said, and they agreed to let him stay where he lay.

When asked why no one from the hospital was helping them get inside, a hospital worker said staff was inside suiting up in protective gear. Ebola spreads through contact with bodily fluids from an infected patient.

More than 2,800 people have died over the past six months in West Africa. Five countries have reported Ebola cases, but Liberia, Guinea and Sierra Leone have carried the largest burden.

Island Clinic is supported by the government of Liberia and the World Health Organization. When shown CNN's video of the patients collapsing, a WHO representative was horrified, but said the patients shouldn't have waited until they were so sick to seek help.

"I think the lesson here is that people come too late," said Peter Graaff.

But many Ebola patients don't wait by choice -- there's an estimated shortage of 700 Ebola beds in Monrovia alone, and patients often wander from hospital to hospital, only to be turned away.

"I know, I know," said Graaff, WHO's country representative in Liberia. "That's why we need to increase capacity."

Graaff said he would try to find out why hospital workers didn't come help the patients. He said he hopes any opening-day difficulties won't discourage patients from seeking help -- he doesn't want them to stay home.

"It's shocking," he said. "This is exactly what we should try to avoid in the future. It's horrible."

The number of Ebola cases in Liberia and Sierra Leone could rise to between 550,000 and 1.4 million by January if there are no additional interventions or changes in community behavior," the Centers for Disease Control and Prevention said in a report Tuesday. The estimate was derived from a new forecasting tool developed by the CDC.