Robin Thicke says he was high during ‘Blurred Lines’

Hit single is subject to lawsuit over copyright infringment 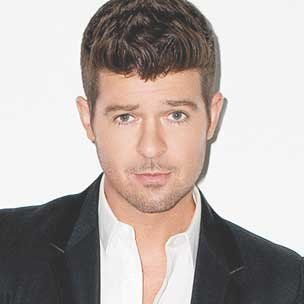 Robin Thicke said in a deposition unsealed Tuesday that he had been high on drugs and alcohol and was mostly absent during the composition of the global hit “Blurred Lines,” which is the subject of a copyright infringement lawsuit in Los Angeles.

Thicke said he had been mixing the opiate painkiller Vicodin with vodka during the period when “Blurred Lines” was penned largely by singer-producer Pharrell Williams, according to the document.

In the deposition, Thicke says he was simply “lucky enough to be in the room” when Williams wrote the song.

Marvin Gaye’s children filed a copyright infringement case against Thicke and Williams last year, alleging that the two R&B singers had copied elements of Gaye’s 1977 song “Got to Give it Up” to create “Blurred Lines.”

Thicke and Williams deny the hit resembles Gaye’s recording in any fundamental way.

“I had a drug and alcohol problem for the year ... I don’t recall many things that I said,” Thicke said in the deposition, referring to interviews in which he trumpeted the influence of Gaye on his work.

Attorneys for Thicke and Williams argue that eight alleged similarities to “Got to Give It Up” claimed by the Gaye family are “based on commonplace elements” of the late soul singer’s “sound recording” that were not included in the sheet music he submitted to the copyright office in 1977 to register his copyright.

U.S. District Judge John A. Kronstadt has set an Oct. 20 motions hearing in the matter.

“Blurred Lines” has sold about 15 million copies worldwide, according to Billboard.