Home for Good announces $213 million in grants to fight homelessness 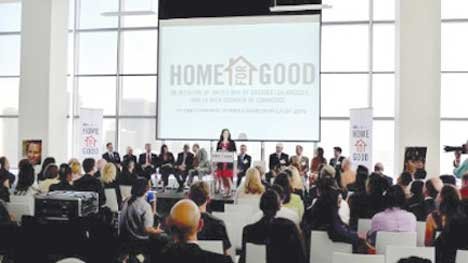 A coalition of businesses and foundations announced Wednesday the awarding of nearly $213 million in grants to two dozen social service agencies in hopes of providing housing for at least 1,400 homeless people in the region for as long as 15 years.

Since its founding in 2011, the Home for Good Funders Collaborative has distributed more than $438 million in grants to agencies, thanks to donations from foundations, corporations and volunteers.

A portion of the most recent grant funding is expected to be used to expand the use of the “Coordinated Entry System,” a system aimed at gathering data on the homeless to strategically match them with permanent housing and support services.

New funding for the system “will enable leadership in all eight Los Angeles County Service Planning Areas to know all homeless people in their region by name and begin systematically matching them to the right permanent housing option,” said Christine Marge, director of Home for Good. “The CES system ensures that we maximize precious resources by ensuring that each person has the right fit housing. Each of the eight county regions will be able to provide housing far more rapidly and strategically by looking holistically at the region’s need and its resources within a framework designed to maximize results in a coordinated, targeted fashion.”