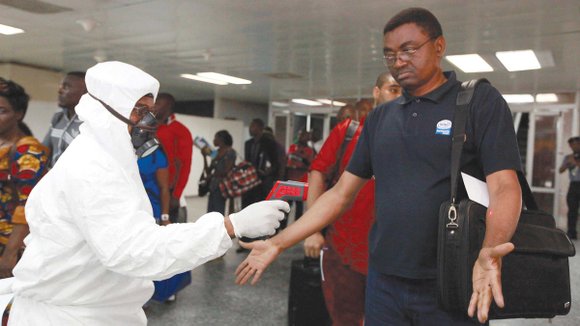 The Centers for Disease Control and Prevention (CDC) and the Department of Homeland Security’s Customs and Border Protection (CBP) this week began new layers of entry screening at five U.S. airports that receive more than 94 percent of travelers from the Ebola-affected nations of Guinea, Liberia, and Sierra Leone.

New York’s JFK International Airport will began the new screening tomorrow. In the 12 months ending July 2014, JFK received nearly half of travelers from the three West African nations. The enhanced entry screening at Washington-Dulles, Newark, Chicago-O’Hare, and Atlanta international airports are expected to begin next week.

“We work to continuously increase the safety of Americans,” said CDC Director Dr. Tom Frieden, M.P.H. “We believe these new measures will further protect the health of Americans, understanding that nothing we can do will get us to absolute zero risk until we end the Ebola epidemic in West Africa.”

CDC is sending additional staff to each of the five airports. After passport review, the following will take place:

· Travelers from Guinea, Liberia, and Sierra Leone will be escorted by CBP to an area of the airport set aside for screening.

· Trained CBP staff will observe them for signs of illness, ask them a series of health and exposure questions and provide health information for Ebola and reminders to monitor themselves for symptoms. Trained medical staff will take their temperature with a non-contact thermometer.

· If the travelers have fever, symptoms or the health questionnaire reveals possible Ebola exposure, they will be evaluated by a CDC quarantine station public health officer, who will again take a temperature reading and make a public health assessment. Travelers, who after this assessment, are determined to require further evaluation or monitoring will be referred to the appropriate public health authority.

· Travelers from these countries who have neither symptoms/fever nor a known history of exposure will receive health information for self-monitoring.

Entry screening is part of a layered process that includes exit screening and standard public health practices such as patient isolation and contact tracing in countries with Ebola outbreaks. Successful containment of the recent Ebola outbreak in Nigeria demonstrates the effectiveness of this approach.

Currently, all outbound passengers are screened for Ebola symptoms in the affected countries. Such primary exit screening involves travelers responding to a travel health questionnaire, being visually assessed for potential illness, and having their body temperature measured. In the last two months since exit screening began in the three countries, of the 36,000 people screened, 77 people were denied boarding a flight because of the health screening process. None of the 77 passengers were diagnosed with Ebola and many were diagnosed as ill with malaria, a disease common in West Africa, transmitted by mosquitoes and not contagious from one person to another.

Exit screening at airports in countries affected by Ebola remains the principal means of keeping travelers from spreading Ebola to other nations. All three of these nations have asked for, and continue to receive, CDC assistance in strengthening exit screening.