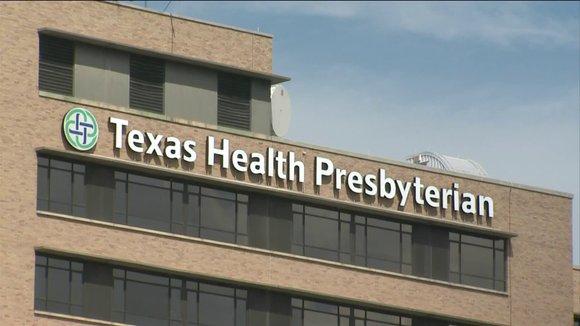 Thomas Eric Duncan is the man being treated at a Dallas, Texas, hospital for Ebola, his half-brother, Wilfred Smallwood, told CNN's Danielle Garcia. Duncan is the first person to be diagnosed with Ebola in the United States.

After the man's diagnosis, the Obama administration is recirculating its guidance about how to respond to the virus, White House spokesman Josh Earnest told reporters Wednesday. "In light of this incident," Earnest said, "the administration has taken the step of recirculating our guidance to law enforcement agencies that are responsible for securing the border, to those agencies that represent individuals who staff the airline industry and to medical professionals all across the country, to make sure people are aware there is an important protocol that should be implemented if an individual presents with symptoms that are consistent with Ebola."

Five students at four different schools came into contact with the man, Dallas Superintendent Mike Miles added, but none has exhibited symptoms of the deadly virus. The children are being monitored at home, and the schools they attended remain open, Miles said. Between 12 and 18 people have been identified as having come in contact with the patient, who is the first to be diagnosed with Ebola in the United States, officials said.

Concern about the possible spread of the killer virus comes less than a day after the Centers for Disease Control and Prevention announced that, for the first time, a person with Ebola was diagnosed on American soil.

And the handling of the case has sparked serious questions.

The patient, a man, walked into an emergency room at Texas Health Presbyterian Hospital in Dallas on September 26. A nurse asked him about his recent travels while he was in the emergency room, and the patient said he had traveled to Africa, said Dr. Mark Lester, executive vice president of Texas Health Resources.

But that information was not "fully communicated" to the medical team, Lester said.

The man, who had flown from Liberia to the United States about a week earlier, underwent basic blood tests, but not an Ebola screening, and was sent home with antibiotics, said Dr. Edward Goodman with Texas Health Presbyterian Hospital.

Two days later, on September 28, the man returned to the facility, where it was determined that he probably had Ebola. He was then isolated. He tested positive for the virus Tuesday, health officials said.

The CDC, which has helped lead the international response to Ebola, advises that all medical facilities should ask patients with symptoms consistent with Ebola for their travel history.

It's possible that others were infected because of the lapse. People who have Ebola are contagious -- but only through contact with infected bodily fluids -- when they display active symptoms of the virus, such as a high fever, severe headache, diarrhea and vomiting, among others. It's not like a cold or the flu, which can be spread before symptoms show up, and it doesn't spread through the air.

That the man had recently arrived in the United States from Liberia should have been a huge red flag. That country is one of the hotspots in a large outbreak of Ebola in West Africa, with 3,458 cases and 1,830 deaths as of September 23, according to the World Health Organization. Other countries affected include Guinea, Nigeria and Sierra Leone. In total, more than 3,000 people have died in those countries from Ebola, and more than 6,500 have contracted the disease.