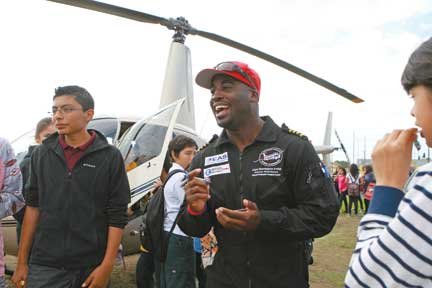 Captain Barrington Irving met a pilot when he was younger, and it changed his life. Now he talks to children across the nation about the profession. In the photo above, he is talking with students at Davis Middle School. OW photo courtesy of Jason Lewis

The students at Davis Middle School in Compton, joined by hundreds of others from Bunche, Enterprise, Roosevelt, Vanguard, Walton, Whaley, and Willowbrook middle schools, were treated to a special guest, who was flown in by helicopter.

Captain Barrington Irving, who at the age of 23 became the youngest pilot to fly solo around the world in a single-engine airplane, was on hand to discuss his inspiring story at the S.T.E.M. (science, technology, engineering, math) Career Fair.

Irving showed great pride as he spoke to the students about his profession.

“To be able to bring science and math to the classroom in the way we did, it’s showing these students what’s possible in these fields and in these careers where you can make a good living,” Irving said. “You don’t have to be an athlete or an entertainer. I was a top athlete in Florida, but my life changed, when I met an airline pilot.”

Irving was excited to come to Compton, because he is from Liberty City, Fla., which is very demographically similar. He was able to speak to children who were just like him when he was younger.

“With scientists and engineers, people have misconceptions because of what they see on TV,” Irving said. “It looks like they live boring lives. But they love speed, they love to jump out of planes, they love to explore, they love to dive. These people are able to live life to the fullest because of science and math. Because they have the skill.”

Now recognized as a pioneer in education, he is preparing to revolutionize online learning by piloting the world’s first Flying Classroom. On this flight, he will combine air, land, and sea expeditions with a digital curriculum to engage millions of children throughout the world.

For more information about Irving and his online class, visit his website at www.flyingclassroom.com.