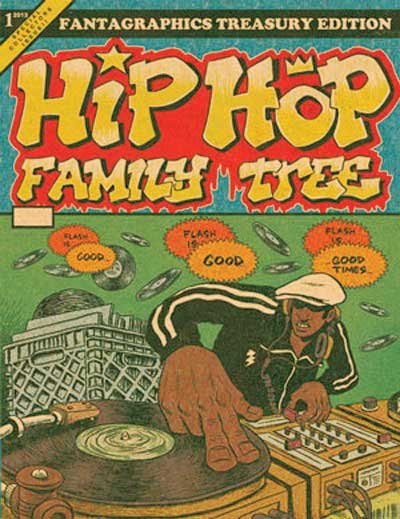 The fact that this writer is not a habitual listener of Rap is, simultaneously, a negative and positive in reviewing the subject. Obviously not being a fan means not being intimately familiar with all that contributed to the development of the music. Conversely, this unfamiliarity might well bring an impartial, (hopefully) unbiased view to the genre.

Underground cartoonist Ed Piskor’s “Hip Hop Family Tree”( Fantagraphics, $24.99) purports to tell the story of the most dominant form of music of the last few decades through the comic book medium. This in itself is a novel idea, in that each is a uniquely American art form, albeit appearing some 70 years apart from each other. Additionally, the strip initially appeared on Piskor’s blog at the website “Booing Booing,” with the internet itself being a largely American construct that materialized into a global phenomenon just after the advent of Rap.

Presently, Rap has been absorbed into contemporary culture to the point where its brightest stars such as Jay-Z and Kanye West have transcended the genre—recognized by folks outside their musical fan base and regularly mingling with athletes and other entertainers to form the endless merry-go-round of celebrity that dominates the media industry.

“Hip Hop Family Tree” harkens back to the era in which Rap emerged from the party culture that thrived within the various boroughs of New York (the West Coast and the “Gangsta” style it spawned, are thus far omitted from his narrative). The foundations for all this originated in recreation rooms and community centers throughout the Bronx and Queens by individuals with ambitions to do nothing but have a good time. Within this social fraternity however, a few individuals stood out for their commitment to capitalism and the tradition of urban entrepreneurialism. Chief among these was a middle-class kid from humble beginnings in the locality of Hollis, Queens, from which such notables as Ja Rule, LL Cool J, Ed Lover, Young MC and others have sprung. This particular entertainment mogul was Russell Simmons, who would go on to birth the Def Jam Recording label, Phat Farm and other clothing lines, and other commercial venues in the Urban Contemporary lexicon.

Today, Russell Simmons is known for his devotion to yoga, the endless steam of willowy super models he escorts, and the impregnable Zen aura he presents as he pursues the activities that come with the lifestyle of the jet set. “Family Tree” depicts him in the formative years of building his empire as a street-wise hustler negotiating the nooks and crannies of the “Big Apple,” distinguished by his omnipresent “bucket hat” and a lispy speech impediment. One humorous sequence recounts his initial foray into the European market with Kurtis Blow, as they sample the culinary and psychoactive treats available in Paris and Amsterdam, respectively. Drawn and written by a White alternative artist from Pittsburgh, Pa., this portrayal can be, depending on your mindset, alternately hilarious or offensive.

Another Queens native who makes an appearance here is a studious graphic design student named Carlton Douglas Ridenhour, who was considerably more successful as a performer under the moniker Chuck D. Chuck and Russell are just two of the many examples of the transformative possibilities that exist within the confines of these United States. With drive, ambition, and a little luck, one can rise above one’s station in life, in this, the land of eternal opportunity.