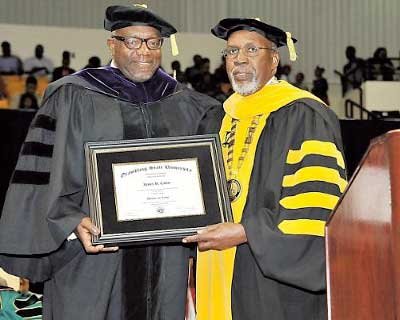 Grambling recognized Colon for his commitment to diversity in the automobile industry and long-term support of historically Black colleges and universities (HBCUs), and the academic achievement of young African Americans. At Toyota, Colon is responsible for engaging Hispanic and African American businesses and media, and optimizing relationships with important external Hispanic and African American groups. Under his leadership, the automaker implemented the Toyota Green Initiative designed to educate and encourage students on HBCUs to live environmentally-conscious lifestyles. Nearly 5,000 people have made the Promise Pledge to Live Green, and 28 HBCUs have participated in the Green Campus Contest.

“I am honored to have received this degree from one of the most respected and distinguished historically Black colleges and universities in the nation,” Colon said. “When an institution of higher education confers an honorary degree, it believes that the recipient reinforces its values, its mission.

Grambling’s vision is to be a distinguished institution that produces accomplished graduates who go on to compete and succeed in a global market. In short, Grambling believes in being the best and producing the best—to help the world be the best it can be. I, along with Toyota, share in that mission everyday and will continue to do so.”

In addition to his responsibilities at Toyota, Colon serves on the boards of his alma mater, Manchester University in Indiana, and Clark Atlanta University. He is a member of The United Negro College Fund Los Angeles Leadership Council. He was also appointed in 2012 to the board of the Congressional Black Caucus Foundation, where he supports the organization’s mission by contributing to developing leaders, informing policy and educating the public.