‘The White House for Kids: A History of a Home, Office, and National Symbol’ 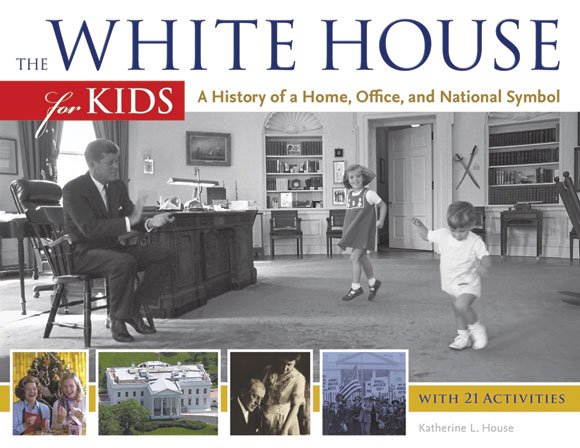 Your parents grumble a lot about politics.

They don’t like who’s in charge of certain departments. They’re upset about laws and regulations, and they worry about taxes and the economy. You want to be a good citizen, too, so you remind them to vote.

Throughout the 238-year history of the U.S. presidency, a lot of people have called the White House home—and they usually brought their kids along, too.

Our second president, John Adams, was the first to live at 1600 Pennsylvania Avenue when he and his wife Abigail moved into the unfinished building. Later, Thomas Jefferson added East and West wings; John Quincy Adams planted gardens; central heating was added in the Van Buren era; a telephone was installed during the Hayes administration; and in the late 1940s, the entire White House was renovated down to the ground.

But what’s it like to be a kid in the White House?

It’s interesting, that’s for sure. One day, when the Cleveland’s nurse took their baby out for fresh air, people crowded around to “kiss and pet Ruth.” Ruth’s mom wasn’t happy, and closed the White House gates. Susan Ford’s senior prom was held in the White House (with permission from Dad, but not with taxpayer dollars). Malia and Sasha Obama have chores to do around the White House.

And then there’s the fun!

First Kid Quentin Roosevelt was a mischief-maker, and once shot spitballs at a hallway portrait of Andrew Jackson. Quentin’s father, President Theodore Roosevelt, got Quentin out of bed to clean things up.

Tad Lincoln had a “fort” on the roof of the White House. Alice Roosevelt had a pet snake named Emily Spinach. Charlie Taft’s hand-me-down clothes went to the children of White House employees. Amy Carter had a treehouse that her father designed. And LBJ’s daughter, Lynda Johnson, came up with a “unique solution to avoid attention"—she wore a disguise!

There’s a lot to like about “The White House for Kids.” But then, there’s much to grit your teeth over, too.

Kids who are interested in our president’s home will learn plenty here. Author Katherine L. House shares tales from many generations of First Kids, as well as the good and bad of White House life. She offers photos, history of the building, and a broad overview of the important things that happened there.

On the flip-side, I found errors in this book, and lengthy sections on government that were too off-topic. I also thought that the “activities” here were, to borrow a phrase from its target audience, lame.

And yet, I can’t get over the kid-friendliness of this book, or the plethora of photos, or the abundance of sidebars, and I think children will like it. For curious 10-to-15-year-olds, “The White House for Kids” is a book they’ll elect to read.