Southern California aviation history on display this weekend in Lancaster

Blue Angels are back in the air 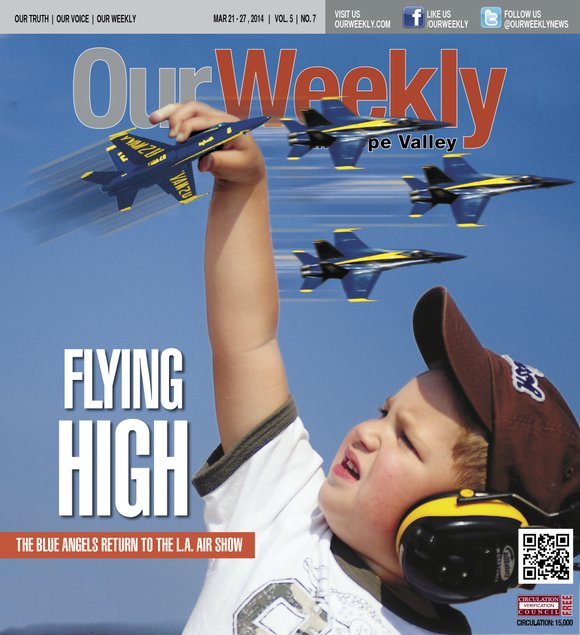 The Blue Angels will take flight for their first show in a year at the 2014 Los Angeles County Air Show today and tomorrow at William J. Fox Airfield, 4555 W. Avenue G, in Lancaster. Gates will open at 9 a.m. both days with tickets priced at $20 for persons 13 years and older, $10 for ages six to 12 years and free for children five years and under. A “Family Fun” pack is available for $50. The admission price does not include seats.

The Blue Angels are the United States Navy Flight Demonstration Squadron and were organized in 1946 by Admiral Chester Nimitz with the first show taking place that year at Craig Field in Jacksonville, Fla. Not to be confused with the U.S. Air Force Thunderbirds, the Blue Angels are witnessed by an estimated 11 million people each year; more than 50,000 persons are in attendance at each show from March through November. The government sequestration last year forced their grounding, and they finally took to the air again last week at their winter practice session at the Naval Air Facility in El Centro.

“Community outreach is key to connecting Americans to the military,” said Thomas Frosch, commanding officer and flight leader, this week in announcing the new season. “Our performances provide a unique opportunity to inspire millions to connect with and support our service members.” The group is scheduled to perform 65 shows at 34 locations nationwide this year.

In 1946, Admiral Nimitz, chief of naval operations, had a vision to create a flight exhibition team in order to raise the public’s interest in naval aviation and to boost Navy morale. At that time, the aircraft included the F6 Hellcat, the F8 Bearcat and the F9 Panther. The 1950s saw the inclusion of F9 Cougar and the F11 Tiger, and the introduction of the famous six-plane delta formation, still demonstrated today. By the end of the 1960s, the aviation troupe was piloting the F-4 Phantom; the mid-70s would feature the A-4 Skyhawk, a smaller and lighter aircraft with a lighter turning radius that allowed for more dynamic flight demonstrations. By 1986, today’s F/A-18 Hornet had become the star of the show.

A number of support aircraft to carry and service the fighter planes were utilized early on by the Blue Angels, including the McDonnell-Douglas R4D Sky Train, the Curtiss R5C Commando, the Douglas R5D Skymaster and the Lockheed C-121 Super Constellation. Lockheed-Martin’s behemoth C-130 transport is used today and is commonly referred to as “Fat Albert,” the moniker taken from Bill Cosby’s popular 1970s cartoon character because of its immense size and shape. It holds 46,000 pounds of fuel, will cruise at 375 miles per hour and requires eight Marines to operate it (three pilots, two flight engineers, a navigator, a flight mechanic and a loadmaster). Practically all of the aforementioned military aircraft over the past 60 years were conceived and designed in the South Bay cities of Downey, Hawthorne, Inglewood and El Segundo, and tested at Edwards Air Force Base in Palmdale. Additional support aircraft have included the SNJ Texan (1946), the T-33 Shooting Star (1952-54) and the F7U Cutlass from 1952-53.