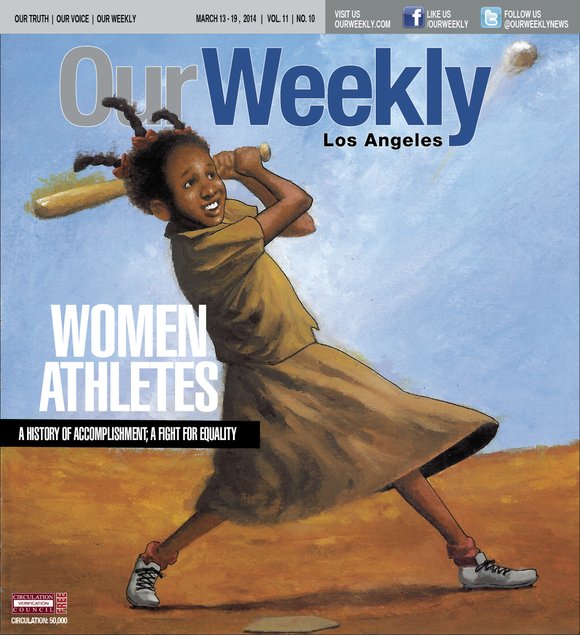 In several industries in the United States, women have competed right along side of men, and they have been able to perform at extremely high levels without the same type of support that men have benefited from. Sports is one of those industries, as women have had to overcome a lack of funding, lower pay, less opportunity, having to earn a living in other countries, and being objectified. But even with those issues, female athletes have triumphed at the highest levels of sports, and in many cases, they have been just as popular, if not more popular, than their male counterparts.

As African Americans were fighting for Civil Rights during the 20th century, and breaking barriers in sports, women were also breaking down doors. When Jackie Robinson broke Major League Baseball’s color barrier, there were very few options for female athletes. That did not stop women like Toni Stone, Mamie “Peanut” Johnson, and Connie Morgan, who were not allowed to play in the All-American Girls Professional Baseball League because they were Black.

These three women would not allow that to stop their aspirations, so they played baseball in the Negro Leagues, with the men. They were not novelty acts, as Stone batted .243 during the 1954 season, with a hit off of legendary pitcher Satchel Paige. Johnson recorded a 33-8 win-loss record as a pitcher, and she batted .273 over her career.

During that era women’s athletics received very little, if any funding. Title IX, which was introduced in 1972 and bought about equal funding between male and female athletics for high school and college sports, was not around, but that did not stop the Tennessee State Tigerbelles from producing six Olympians in 1956. Mae Faggs, Lucinda Williams, Isabelle Daniels, Wilma Rudolph, Margaret Mathews, and Willye White all traveled to Australia to compete in track and field.

When coach Edward Temple took over the women’s program in 1950, the budget was only $300 and the facilities were very poor. Without any financial help to start, the program produced 40 Olympians and 34 national titles.

Even after Title IX was created, women still struggled for equality, even though many of them were producing on the same level as men in their sports. Coach Bob Kersee, who has coached numerous women to Olympic gold medals in track and field, including his wife Jackie Joyner-Kersee, had to fight for track time when he became the women’s coach at UCLA in 1980.

“When I first got here, we couldn’t even use the track when the men were using the track,” Kersee said. “We had to fight to be on the track at the same time.”

The lack of funding was not the only disparity, as prize money and endorsements were not close to being the same either.

“Shoe companies were not putting money into women as they were to men,” Kersee said. “The financial hardships were there.”

Kersee was producing Olympians, but to help pay for their training and travel expenses, they had to fundraise with run-a-thons, bake sales, and car washes, while male athletes had their expenses paid for and were even able to make a good living. Even with these issues, women pushed forward and captivated the world with their athletic feats.

These issues were not only in track and field, as women in several sports were not getting equal pay, and the problem still exists today. 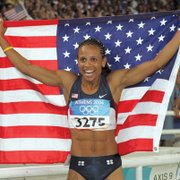 “Tennis went that way, when Billie Jean King and other players wanted equal pay,” Kersee said. “What ever the men are making, the women should be making. Venus and Serena Williams were putting people in the stands just as much as Andre Agassi or any other man was.”

With the help of Title IX, and the perseverance of many women, the gap has closed to the point where women can now make a living and have the financial backing to become elite athletes. But total equality has not been reached.

“I think it’s getting closer, but there is a long way to go,” said Joanna Hayes, who won the gold medal in the 2004 Olympics in the 100-meter hurdles. “In any fight, like Civil Rights, it’s never ending. Hopefully equality is closer than farther away. Will Black people ever be equal to White people in this country? Probably not, even with a Black president. Will women ever be equal to men? Probably not. But how close can we get, and how can we make men understand that we are equal? We have proved time and time again that we can do everything that they can do.”

Hayes, who competed at UCLA before turning professional, believes that the pay should be equal, specifically since they are doing the same job. She points out that the men’s 100-meter champion is going to earn more money than the women’s 100-meter champion, mostly through endorsements. In track and field, the Diamond League gives equal prize money to men and women, but that does not make the pay totally equal.

“Track has done a better job in trying to be fair than some other sports,” Hayes said. “Part of it is because you tune in (to men and women) at the same time. The viewers are the same. You’re not going to say, ‘well, this many people are watching this.’ They don’t change the station when the women’s 100 comes on.” 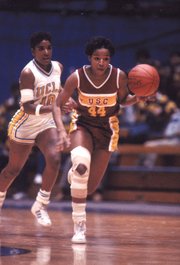 But Hayes points out that the most popular athletes can be paid more in appearance fees, whether they are winning or not. That, and endorsement deals, is where the financial disparity comes into play.

Because of the efforts of many women, the pay is better, but in certain sports there is still a huge disparity.

“There are a number of women who are making a very good living, it’s just not as spread out across the board as it is for men,” Hayes said. “If you take men’s and women’s basketball, there is a huge disparity in the contracts and endorsement money. You have a few of the top WNBA players who make a great living, but your lowest paid player is barely making ends meet. And they have to travel to Europe to survive. I get that the public has a lot to do with it, with the fans wanting what they’ll pay to see, and that’s across the board with every sport. We’ve definitely made strides, but we’re not there yet.”

Finances are only one issue. Male athletes can choose sports that keep them in the United States, such as football, basketball, and baseball, but most female athletes have to compete in other countries for the most part. For women’s sports, basketball and track are much bigger overseas. Tennis is popular in the United States, but three out of the four Grand Slam tournaments are played outside of this country, as are a good amount of the professional tournaments.

“It’s tough to have to leave home to try to earn a living,” Hayes said. “You don’t get to have your family and friends there as much as you’d want. If you want them to come to a championship, the Olympics or World Championships, well then you have to pay a lot of money for them to go and see it, as opposed to being here in the states where they can travel to watch the games, and tickets aren’t crazy expensive.”

Cynthia Cooper-Dyke, who is from Watts and played college basketball at USC, is regarded as one of the greatest women’s basketball players ever, but she had to play the first 10 years of her illustrious career in Europe, away from family and friends, because there was not a women’s basketball league in the United States at the time.

Being shipped out to be a professional athlete is difficult for a woman who wants to have a family.

“For women who have a family, have a husband and children, it is hard to have to leave your family at home,” Hayes said. “Some women will bring their children with them on the road, which is a good experience for kids to do that, but it’s also uprooting your child from what they know. They don’t always get that sense of stability.”

Another issue is the way that female athletes are viewed in the public eye. As most of them are in great shape, they can be easily objectified. 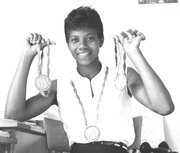 “There has always been, and will probably always will be, whether they’re athletes or not, women being looked at as sexual objects, and they are objectified on so many levels,” Hayes said. “If a woman takes off her clothes for a magazine, she’s a whore, but when a man does it he’s sexy.

“With women, in a sport like track and field, the clothes that we compete in are very small. So men will comment on that. Serena Williams, she’s voluptuous, and men will comment on that. As opposed to just saying that this woman is great at what she does, she also has to be beautiful and sexy. When is a woman going to be a great athlete, period? There always has to be that ‘also’ when it comes to women.”

Even with the hurdles placed in front of women, female athletes have still risen to the challenge of producing greatness.

“Women, we’re fighters. We have babies, so we’re the stronger gender,” Hayes smiled as she said. “We hang tough and we work hard for what we want. We’ve always been pushed to the back, but we still rise and we still fight.

“You have to really love what you do. I think that part of it is for the love of the game, the love of the sport. Regardless of what you get paid, you want to do it. And a lot of women want to be pioneers. They want to make it possible for younger generations to have more. Obviously, 50 years ago we didn’t have any of this. So those women have made it possible for us. The Billie Jean Kings and Jackie Joyner-Kersees, and Wilma Rudolphs. People like that, who came before us, and every decade it gets better and better.”