Seahawks’ DeShawn Shead gets day named in his honor 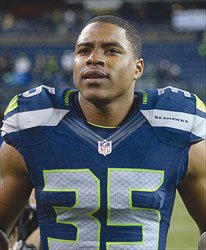 The Palmdale City Council honored Highland High School graduate DeShawn Shead, a member of the 2014 Super Bowl winning Seattle Seahawks football team, at its March 5 meeting, presenting him with a proclamation that declared March 6 as “DeShawn Shead Day” in Palmdale.

“We’re proud that one of our own has achieved the pinnacle of success in his chosen profession,” said Palmdale Mayor Jim Ledford. “DeShawn was an outstanding student athlete here in Palmdale at Highland High School, and went on to achieve his goals of playing in the NFL and winning a Super Bowl title.”

Shead is the first Palmdale resident to win a Super Bowl.

“What’s most special about DeShawn is that he’s the complete package,” Ledford said. “He’s a great student, a wonderful person, a super teammate and an amazing athlete. By displaying hard work, tenacity, determination and skill throughout the years, he is a role model for young student athletes everywhere, and living proof that dreams can and often do come true.”

Shead enjoyed a highly successful high school career at Highland High School and was a two-time All-Conference defensive back. He was also named the winner of the 2006 National Football Foundation Scholar Athlete award, and holds the school’s pole vault record.

He attended Portland State University on a scholarship, where he was a four-year starter in the defensive backfield for the Vikings, registering 211 tackles, 11 interceptions, five fumble recoveries, four forced fumbles and 29 passes defensed throughout 44 games in his career, while also handling kickoff return duties. He was an All-Big Sky conference selection his senior year, a second-team All-Big Sky his junior year, and earned his teammates’ vote as the team’s Most Outstanding Defensive back.

The Seahawks signed Shead as a rookie free agent in April 2012, and he has since played a significant role on the team, culminating in a victory in Super Bowl XLVIII.