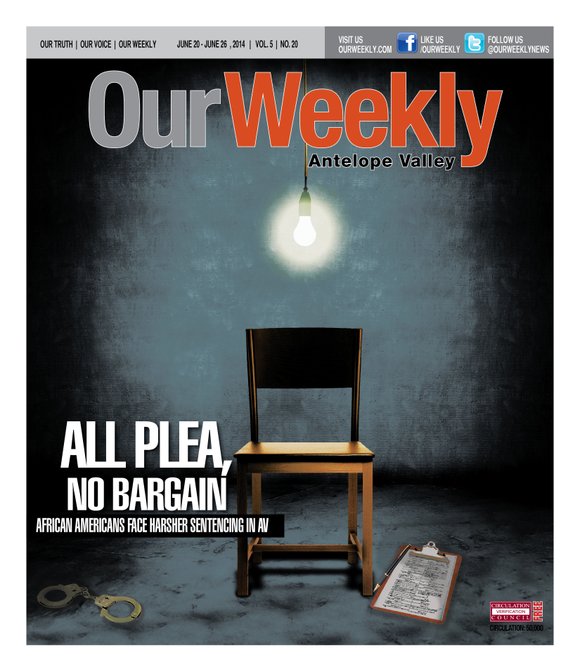 Minority defendants in the Antelope Valley are being overcharged and forced to agree to plea bargains at a much higher rate than at any regional court in Los Angeles County. According to the Antelope Valley branch of the NAACP, this practice of bypassing the Sixth Amendment has become typical of judicial proceedings at the court which has gained infamy as the “Antelope Valley Hanging Courthouse.”

In a plea bargain, the prosecutor usually confers with the defense attorney to offer a reduced prison sentence, if the defendant agrees to waive his/her right to trial and admit guilt in a summary proceeding before a judge. In Superior Court, both lawyers work for the local District Attorney office.

From the government’s perspective, plea bargaining is less expensive and less time consuming than a jury trial. Also, by eliminating the jury, prosecutors and judges have more influence over case outcomes. In the eyes of the defendant, plea bargaining often extorts a guilty plea. When the prosecution allegedly has a “witness” (who may be willing to lie), and the defense attorney urges the person to take a one-year-sentence rather than risk a 10-year ruling, the decision of the defendant becomes much harder.

In most scenarios, a prosecutor has a good idea of what he/she can reasonably expect a jury to convict a defendant of, based on the evidence. But when the evidence is limited, a prosecutor may not believe that a jury will convict the defendant of any charges. With the responsibility of obtaining a conviction, the prosecutor may decide to bring several additional charges against the defendant. This process can function as a “threat” against the defendant to remind the person that they are in “big trouble.” If the defendant buys into this threat, the prosecution now has additional bargaining chips. Therefore, if the defendant is facing a slew of charges, he/she can be given the false impression that the best chance to face the least punishment would be to plead guilty to one charge in exchange for the others being dismissed. Basically, overcharging increases the power/influence the prosecution has in plea bargaining.

Trouble is, too many persons at the Antelope Valley Courthouse are being allegedly pushed into the option of a plea bargain, and a good number of those defendants have no prior record. They are being routinely charged with far more than prosecutors can prove and that can put maximum pressure on the person to agree to a plea. The Antelope Valley Courthouse secures a stunning 85 to 95 percent rate of convictions by way of plea bargains; this judicial practice is common nationwide among minority defendants.

Where does the Sixth Amendment (“right to a speedy trial”) figure in this controversy? That’s what Rev. V. Jesse Smith, president of the Antelope Valley NAACP, would like to know. “The time has come that we as a community stand up with one united voice and speak out against this injustice,” Smith said last weekend at a march and rally in front of the courthouse. “Many of the defendants don’t understand the plea bargain arrangement and they are not informed ahead of time of the ramifications. Jail time is their pressing concern. We must challenge these overcharges; often there are no real facts to support a plea bargain.”

Smith and allies are not accusing the bench nor prosecutors of unprofessional behavior in pushing through so many plea bargains, noting that he has sympathy for the [County District Attorney] office that is “terribly overworked and underfunded,” he said.

Plea bargaining and racial profiling are factors contributing to the current overrepresentation of minorities in the judicial system. African Americans are disproportionately subjected to conditions such as racial profiling (e.g. traffic stops) which often lead to searches/seizures that typically yield minor offenses but also lead to jail time rather than probation or rehabilitation. Black defendants are steered more often to plea bargains because, traditionally, they are significantly more disadvantaged financially than Whites at the point of incarceration and can’t pay for an attorney. Also, White defendants before the court are sometimes more likely to benefit from the use of mitigating provisions such as “first-time offender” status.

The Sentencing Project reported in 2006 that more than 90 percent of all cases before the U.S. justice system are settled by plea bargaining rather than exercising the right to trial. The rate of Black felony convictions is overwhelming, the study reported: African Americans constitute 13 percent of all drug users, yet represent 35 percent of arrests, 55 percent of convictions and 74 percent of prison sentences.

In 2004, the Constitutional Rights Foundation called for a ban on plea bargaining. Its report cited a U.S. Sentencing Commission study from 2000 that found that 25 percent of White Americans get their sentences reduced via plea bargaining, compared to 18 percent of Blacks and only 12 percent of Latinos.

A 2003 Justice Policy Institute (JPI) study found that Black defendants often receive much harsher treatment and sentencing, perhaps, because of a general perception by the court system that they are dangerous. Minorities convicted of drug offenses, those unable to secure pretrial deals (and release), those with prior criminal records and those who refuse to plead guilty are more likely to be overcharged and forced into a plea bargain. This may be explained by certain new “response techniques” of law enforcement officials to a “perceived threat” that is driven by a heightened threat seen in the majority community that minorities’ higher tendency to commit crime is a threat to social order.

Plea bargains are central to the high rate of Black incarceration. As far back as 1997, Human Rights Watch in its report “Cruel and Unusual” stated: “Many observers of the (United States) criminal justice system are concerned that the highly punitive mandatory sentencing laws in effect coerce guilty pleas and threaten the continuing vitality of the constitutional right to force the state to prove its charges.”

The JPI study found that there are striking differences in the way “alternative sentencing” is applied to African American defendants as opposed to other persons who appear before a judge:

• Whites have better access to high-quality treatment and alternative (complimentary) social services which diverts them away from crime and punishment;

• Minorities are more likely to be arrested for certain behaviors than Whites, notwithstanding that Whites and Blacks commit crimes at equivalent rates.

The report illustrated a common complaint among Black defendants and those who advocate for a change in sentencing guidelines by noting that African American neighborhoods are targeted more often for drug enforcement compared to their White counterparts. Therefore, the incident of arrest and conviction of Black persons are ultimately higher because these defendants—many of which are first-time offenders—commonly accept a plea bargain and thus admit guilt. Under sentencing, the report stated, “...once people have a criminal record, they are less likely to escape imprisonment.”

“The focus of the criminal justice system has shifted away from trials and juries and adjudication to a massive system of sentence bargaining that is heavily rigged against the accused,” said William Young, former chief judge of the U.S. District Court in Massachusetts in 2004.

In plea bargains, defendants are seldom informed about the underlying effects of pleading to a felony such as losing the right to vote, no access to college loans/aid, job discrimination and if they are non-citizens, the danger of being deported. In some cases, plea bargaining can mean a shorter sentence (assuming the case wasn’t overcharged to begin with). For poor defendants who are not in a position financially to fight charges that may be unfairly leveled against them, the plea bargain may be their only hope for life beyond prison.

Generally, defendants held in pretrial detention will plead guilty faster than those defendants released into the community prior to trial. But too many defendants, Smith said, are enticed into accepting a plea bargain and assume that no jail time is required because the charge—as it was explained to them—does not rise to the level of a felony and they can continue with their life. But that’s not always the case. Given the proliferation of background checks by employers, this effect can be devastating for many. Since the Sept. 11 2001 terror attacks, private security firms are increasingly conducting criminal background checks that are affecting many job seekers. Black and Latino hopefuls may not have a chance of gainful employment if a felony plea is found on their record.

Physical evidence, the number of charges and confessing to a crime during police/prosecutor interrogation can increase the probability of pleading guilty. Smith said many people who have contacted his office have had extra charges leveled against them stemming from something as common as a car accident.

The NAACP office in the Antelope Valley is frequently contacted by persons who say they have been overcharged and forced into plea bargains. “One man had a car accident and a fight ensued,” Smith explained. “He was charged with assault with a deadly weapon—he was outside of his car—but the alleged victim claimed he feared for his life because he thought the man was going to run over him. There’s another case in which a woman was charged with three felonies and refused a plea bargain because she was a Section 8 client and a guilty plea meant she would have to move out of her home. Because she wouldn’t agree to that initial plea bargain, she had an additional 20 felony counts charged against her and ended up serving two months in jail.” Smith said the 20 felony counts leveled against the woman were dismissed after she served her time.

In short, overcharging increases the power of the prosecution in seeking a plea bargain. Even conservative U.S. Supreme Court Justice Antonin Scalia weighed in last year on the “overcharging” phenomenon, describing the practice as “...a predictable though regrettable aspect of modern plea bargaining.”

A 2007 study conducted by the John F. Kennedy School of Government at Harvard University showed revealed that racial differences in sentencing had more to do with judicial discretion than the sentencing guideline and gravity of the offense combined. The study concluded that prosecutors and judges make tougher sentencing decisions for Black and Latino defendants than they would with Whites who, comparatively, receive lesser sentences.

More young African American males today, the Kennedy School report illustrated, find themselves ensnared within the judicial system with little or no appropriate representation, and even in circumstances where they are not guilty, are forced to plea bargain and receive harsh sentences for crimes they did not commit. In circumstances where there are crimes committed, African Americans are often forced to plea to lesser charges, just to find themselves serving the same length of sentences, as if they did not plea bargain at all.

Another JPI study, from 2007, suggested the following guidelines be adopted to stem the practice of overcharging by prosecutors:

--Divert non-violent and drug offenders from prison to treatment;

--Abolish mandatory sentencing and its guidelines;

--Reform parole practices in order to reduce the rate of recidivism;

“The DA’s are overworked and underpaid, and they can’t help poor defendants as they would like,” Smith added. “We’re not placing blame on the District Attorney’s office. What is needed is more resources for poor people in the legal system. I spoke with Lancaster Mayor (R. Rex) Parris and he agrees that there is mass overcharging taking place across the nation. There can be no dispute about that.”