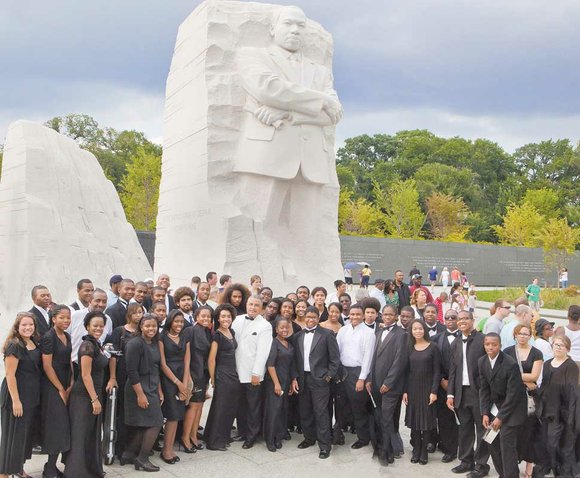 When Hannah Innis was in second grade her parents, Rodney and Karen, asked her public school if she could join the orchestra. To their disappointment, they found out that the earliest their talented cellist could be part of the orchestra was third grade.

This experience reminded the Los Angeles couple that the public school music programs at their childrens’ schools were not very aggressive.

So to give Hannah, 10, and her sister violinist Karah, 13, the challenge the two needed, mom and dad enrolled them in an outside music program that last year took the siblings, and a group of children in grades five to 12, to New York to play at Carnegie Hall.

Now as they look down the road, the Innis’ say Karah—who has heard classical music since she was in her mother’s womb, and at age 5 had perfect pitch—definitely sees herself as a professional musician in the future.

Saxophonist Daniel Richardson is another young local musician who is beginning to make his mark on the L.A. music scene. At 26, he has logged more than a decade and a half of playing music and his resume includes graduating from the Los Angeles High School for the Arts; winning a Spotlight Award as part of The Music Center’s annual scholarship competition honoring the top high school visual and performing artists throughout Southern California; founding his own group, Wilberta, featuring six members playing an eclectic mixture of Jazz, Rock, Indie Rock, R&B, Hip Hop and more; working with the NAACP Afro-Academic, Cultural, Technological and Scientific Olympics (ACT-SO); and working with the National Association of Negro Musicians.

(Applications for the 2015 Spotlight Awards will be available Aug. 1 at http://www.musiccenter.org/education/Students-at-the-Center/Spotlight/).

Richardson was introduced to music as a youngster thanks to his Fisher Price Bubble Sax but credits Jazz pianist Billy Mitchell with helping him refine his performance skills.

“When I first met him, he definitely gave me advice such as how to play to the audience,” remembers Richardson about his first encounter with Mitchell who was judging at an ACT-SO competition.

Mitchell is among a group of dedicated professionals locally helping to mold the next generation of young Black musicians. He is doing this through his organization Scholarship Audition Performance Preparatory Academy (SAPPA).

“Initially I put together SAPPA as a program to help mentor and train African American kids to audition and interview (for competitions),” explained Mitchell, a self-taught artist who was judging various competitions and noticed that not many African American youth were showing up. “Many of those who did participate did not possess the self-confidence and understanding needed to score well.”

Mitchell founded SAPPA in 2002 to address that shortfall, and since its creation, the group has morphed it into a full training program that includes lessons and performance opportunities. He works in conjunction with the Watts-Willowbrook Boys and Girls Club and other organizations to identify and train talented youngsters. For info, visit www.sappa.net or contact the Boys and Girls Club at 39 E. 120th St. (323) 567-3957.

There are a number of other programs like Mitchell’s that are developing the next generation of Black musicians.

• Eubanks Conservatory of Music and Arts was founded in 1951 by Rachel Eubanks as a one-room school on Figueroa and 47th streets, and since 2010 has been headed by president and CEO Louis Lee II. The program currently works in Compton unified and offers youth ages 10-14 a multi-pronged approach that combines learning the culture of music and the arts—music (all genres), drama, ballet, acting, Hip Hop dancing, drawing/art/painting, modern dance and DJ turn table technique—with proactive counseling designed to combat gang violence, teen pregnancy and other social ills. Participants also perform in a end-of-session recital. The free, three-hour after school program also feeds the youngsters a nutritious meal. For info, call (310) 462-5346.

• Musicians in Action, created by Jacque and Gerald Malone is a 22-year-old organization that began predominately as a way for faith-based musicians to network and support one another, but over the years has incorporated a number of training programs for youth.

The first is a drum clinic held every year that gives children as young as age 4, regardless of skill level, a chance for mentoring with music professionals. Each year, the group also hosts a performance called “Gospel Plays Classical,” which gives the many faith-based musicians with classical training a chance to show the range of their skills. Talented youth are also showcased at this event. This years performance will take place Aug. 16.

• SESA Conservatory of Music is a Saturday morning instrumental music program founded in 1995 and sponsored by the Southeast Symphony Association. Youth in grades three to 12 learn instrumental music, theory and composition at all levels. Tuition is $155 per semester, however scholarships are available for those who need them. Scholarships are also awarded on the basis of achievement. For info: (310) 673-SESA (7372).

• Just Lovin’ Music Studio is an 18-year-old Inglewood-based organization that has created the Recorder Fusion Youth Ensemble and Music Conservatory. Working through the school districts, particularly Inglewood and Los Angeles unified, the program teaches youngsters in grades two to eight how to play and master the recorder, understand theory, and read and write music. At the end of the program, participants perform in a recital. Through fundraising, coordinators are also able to secure enough money each year to give every student an ensemble-quality recorder to keep as their own.

• Inner City Youth Orchestra of Los Angeles, started in 2009 and directed by founder Charles Dickerson III, prepares students for advanced study and gives middle, high school and college students (ages 10-25) an opportunity to perform around the region and nation. The group will present its sixth annual concert July 6 at 3 p.m. at Walt Disney Concert Hall, 111 S. Grand Ave. For information on tickets, contact Wade Events at (310) 674-6700 or e-mail: icyolaevents@gmail.com.

• Compton Conservatory of Music provides instruction in music to Compton-area students in grades three through 12 who have an interest or talent in playing an instrument. Instruction is offered in a group setting on almost any instrument and students play in an end-of-session concert.

Classes are held most Saturdays and the program is located on the campus of Compton High School. It accepts children at beginning, intermediate and advanced levels. For information and applications, contact Fred Easter at (310) 704-6635.