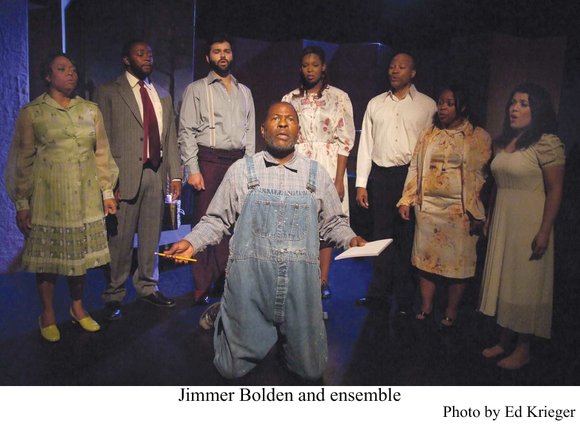 Many of us have known people like J.B. Murray, eccentric old souls whose lives seem lit by some inner flame that guides them to places in the mind where no one else can follow. They may have been poor and illiterate, yet their zeal to accomplish some heavenly purpose drove them past any concerns of creature comfort.

Murray, a Black farm worker in Glascock County, Ga., was illiterate and lived in a shack with neither electricity nor running water. He survived—happily, it seems—on what he grew, killed or caught. Born in 1908, he died 80 years later in 1988.

Though untrained as an artist, after a reported vision from God, Murray managed a prodigious output of work from age 70 until his death. Murray disavowed both fame and money, but today, his art is being praised both in America and abroad.

He painted on cans, sticks, rocks, wall board, wood paneling and whatever else he could find. He wrote a foreign form of script on adding machine tape, envelopes and scraps of paper, which he deciphered by looking through a jar of holy water. He called it “the language of the Holy Spirit, direct from God.”

Murray said the Holy Spirit told him to paint pictures of “them ones in hell,” which he did, but not all his work was so dire.

Murray’s life is chronicled in “Visionary Man: A New American Musical,” which is produced by Spirited Hands Productions. Its premiere was held Saturday in Hollywood at the Hudson Mainstage, 6541 Santa Monica Blvd., Hollywood. It continues on Thursdays, Fridays and Saturdays at 8 p.m., and Sundays at 3 p.m. through August 31.

Murray is played by actor-Jazz singer Jimmer Bolden, and his story is told by Dr. William Rawlings Jr., (Will North), a young White physician whom he befriended. In real life, during a follow-up visit to the doctor’s office, Murray arrived with three shopping bags filled with paintings. Rawlings exposed the work to art professionals who saw it as genius.

With music and lyrics by Mary Padgelek, Murray’s message is couched in humor, song and dance. His politically ambitious son, Samuel (Yorke Fryer), and daughter, Sara (Jacquelin Schofield), cannot agree on their dads’ activity. To Samuel, his father is an embarrassment and a threat to his political career, but Sara just loves her dad. Murray loves them both, and though eventually committed to a mental hospital for a term, he continues to produce his artwork.

This production of a humble man and his work will touch both the head and the heart.

General admission is $28, students with valid ID is $15. Parking across the street is $5.