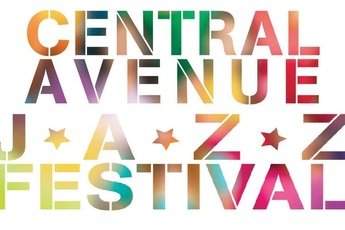 There was music galore, food aplenty and fun for all last weekend at the 19th Annual Central Avenue Jazz Festival. An estimated 30,000 people attended the two-day showcase outside the famous Dunbar Hotel where multi-ethnic guests of all ages enjoyed some of the best sounds in Jazz, Latin, Blues and Rock music.

About 100 vendors displayed an assortment of wares including clothing items, folk art and a variety of cuisine representing the many tastes of Los Angeles. The music was the selling point to all corners of the city; the food enticed the many ethnicities seen dining on everything from barbecue ribs and tri-tip, taquitos and tortas, and egg rolls and chop suey.

“There’s a terrific cross section of Angelenos here with us today enjoying the music and food and getting to know their neighbors from across town,” said Ninth District City Councilman Curren D. Price Jr. His office sponsored the event which also attracted a number of big-name co-sponsors such as Union Bank, McDonald’s, Coca Cola, Los Angeles Dodgers, Bank of America and AEG. “There’s good camaraderie, good feelings and best of all great music and fun. We wanted to present an expression of art and culture found in this community and we’re most thankful to the many local vendors who came to support this fantastic cultural event.”

Much of the older African American crowd were seen dining “al fresco” to the cool Jazz sounds. “We never miss it,” said Eloise Smith who said she remembered some of the big artists who once graced the Dunbar stage. “When I was just a kid, there were all these big music stars here. It is terrific that the memory of that time along Central Avenue is being revived. We’re having a wonderful time.”

The food vendors were busy refilling their shelves practically all afternoon. “We can’t keep enough ready,” said “Rodney” of Kim’s Fruit Lemonade. Between his drink stand, Hambone’s Barbecue, Shabazz Restaurant and Lupita’s Tacos, appetites and thirsts were satisfied throughout the weekend. “We’ve had lines of people since we got here this morning; a hot day calls for cold lemonade.”

New this year was a health and wellness pavilion where representatives from L.A. Care Covered provided information about the November sign-ups for the California Covered. “We’ve had people stopping by all day interested in signing up for healthcare coverage,” said Eddie Rojas, a field representative with L.A. Care Covered. “Many people missed the registration period this past spring, so we’re here to let them know they’ll have another opportunity later this year. We’re very excited to be here.”