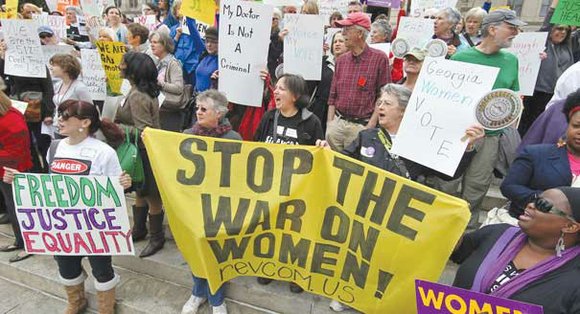 A ruling Monday by the U.S. Supreme Court that family owned corporations do not need to offer insurance coverage for contraception under the Affordable Care Act will jeopardize access to birth control for millions of women, an executive with Planned Parenthood Los Angeles said.

But backers of the ruling said it was a defense of the Constitution’s “principles of liberty.”

Celinda Vazquez, vice president of public affairs at Planned Parenthood Los Angeles, condemned the ruling, saying it will not only make it difficult for millions of women to obtain birth control, but it sets a precedent for business owners to deny other health benefits based on their personal beliefs.

“In 2014, we’re extremely disappointed that we’re still fighting for access to basic healthcare like birth control,” Vazquez said. “Healthcare decisions, like whether or not to take birth control, should be between a woman and her doctor, without the involvement of her boss.”

Vazquez noted that the while the ruling is disappointing, it only applies to smaller family-owned corporations, meaning “more than 30 million women are eligible for birth control without a co-pay thanks to this benefit.”

The court ruled on a 5-to-4 vote that the Affordable Care Act’s provision requiring family-owned corporations to pay for insurance coverage for contraception violated federal law protecting religious freedom. The measure was challenged by two companies owned by Christian families—Hobby Lobby and Conestoga Wood Specialties.

Writing for the Supreme Court’s majority, Justice Samuel Alito wrote that a religious-freedom law applied to corporations controlled by religious families, and requiring them to provide contraception coverage placed a burden on their religious liberty.

Hadley Heath Manning, director of Health Policy for the Washington, D.C.-based Independent Women’s Forum, called the ruling “a victory for anyone who believes in limited government and freedom of conscience rights or religious liberty.”

“This case was about much more than contraception,” Manning said. “It was about the principles of liberty that animate our Constitution. It was about empowering women to choose the healthcare and salary options that best fit their needs. And it was about employers, many of them women, being able to follow their deeply held religious beliefs.”

The ruling, however, has already drawn opposition from the White House, and disappointment from some women’s rights advocates and Democratic legislators.

“The court’s ruling is both disappointing and out of touch with reality,” Rep. Judy Chu, D-El Monte, said. “With 99 percent of women using contraception at some point in their lives, contraception has become essential healthcare. However, a panel of five men decided that a corporation’s interests come before a woman’s healthcare needs.”

“Our members worked hard to help enact the Affordable Care Act and to ensure that such coverage would be part of the package of key preventive benefits offered to all covered workers, and that company leadership would not be able to interfere in women’s ability to make their own personal medical decisions,” she said.