Hate crimes down in L.A. County 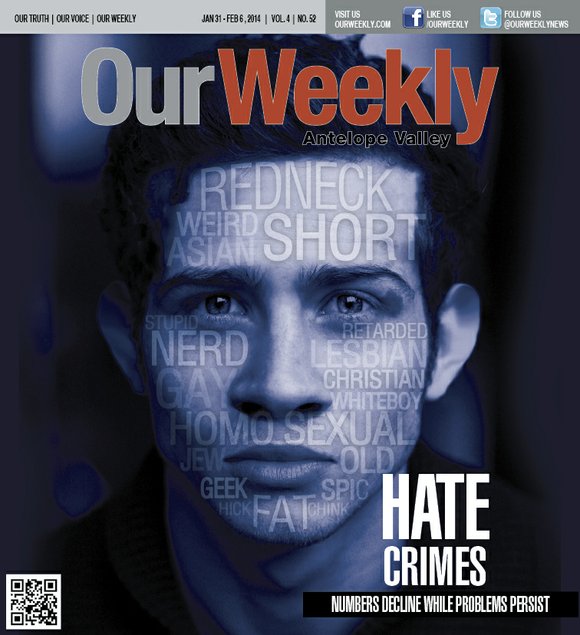 The number of hate crimes reported and prosecuted throughout Los Angeles County has dipped during the past five years, but African Americans residing in the Antelope Valley remain skeptical of these findings. Representatives of a number of civic groups met recently with OurWeekly to reveal widespread incidences of threats, intimidation and physical altercations which have ranged from “hate literature” being strewn around Black neighborhoods, to “storm trooper”-like tactics among law enforcement.

“We’ve had two to three decades of inaction here,” said Nigel Holly, co-founder of T-Cal Community Action League which has for three years documented cases of racial intimidation in the Antelope Valley. “That’s why we went immediately to the DOJ (Department of Justice) and the NAACP. When city leadership and the Sheriff’s Department seem to turn a deaf ear to these complaints, Black citizens have no alternative but to pursue legal redress outside of the county.”

Holly is referring to numerous fliers and circulars distributed this month in both Palmdale and Lancaster blaring: “We hate N*rs,” “Fk Mandela-loving Nrs” and “Nrs get out.” It was revealed that these types of tactics designed to intimidate African Americans from living socially with Whites, as well as to instill fear among other families who may wish to move into the area. They said this has been going on for years and that their complaints have received only “lip service” from local government officials and leaders who represent county interests as well as those charged with enforcing the law.

The Los Angeles County Commission on Human Relations released in October 2013 its annual hate crime report and found that there has been a 6 percent decline (489 hate crimes reported in 2011, compared to 462 in 2012), representing a downward trend begun in 2008. But Blacks persons in the Antelope Valley are reportedly still being subjected to vile racial comments from some residents—the majority of which being White and Latino teenagers—and excessive use of force by Sheriff’s deputies. 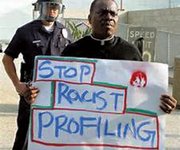 County officials have attributed the decline in reported hate crimes to federal and local law enforcement agencies that have focused crime suppression on gangs that have a history of committing racially-motivated crimes. About half of the county’s reported hate crimes (49 percent) were racially motivated; 66 percent of these incidents were directed at African Americans (representing 9 percent of the county population) of which 68 percent were perpetrated by Latinos. Blacks were suspects in 58 percent of hate crimes directed at Latinos.

Religious hate crimes—particularly against Muslim-Americans—have declined by about 4 percent since 2008, mostly because the number of cases investigated involving vandalism with anti-religious messages have decreased. African Americans, Latinos, Jews and the LGBT community made up 86 percent of all reported hate crimes in 2012, remaining at about the same level for the past three years. The report highlighted the persistent number of anti-Black crimes committed by Latino gang members. Latinos make up about half of the county population, being victimized by 18 percent of reported hate crimes.

The report found that African Americans were the targets in 75 percent of the 61 reported hate crimes in 2012 in which the subjects were gang members. Also, there were findings that showed that the number of hate crimes took place in what the commission calls the “metro region” of the county, broadly described as the areas between West Hollywood and Boyle Heights. After that, it was the San Fernando Valley; when population size is considered, the Antelope Valley tied the metro region for the highest number of hate crimes. White supremacist groups were responsible for 16 percent (77 reported cases) of hate crimes in 2012, falling 25 percent from 103 reports in 2011.

“It is squarely the responsibility of our [Black] leaders and elected officials to educate what has become a subservient community in the Antelope Valley,” said community activist Emmit Murrell. “Too often our own people become desensitized to this ugly behavior and do little to educate the public about what lawful remedies are available to them. Would you believe that a Palmdale High School teacher actually asked a Black kid, ‘What if I called you a fking n*er?’ That’s no way to conduct yourself, no matter what the lesson is at hand. Insults like this have, unfortunately, become typical within the day-to-day interaction of Whites and Latinos with Black persons.”

Hate crimes see no color distinction. In Palmdale two years ago, two Black victims (one gay and the other a transgender woman) were eating in a fast food restaurant when three Black males and a Black female approached them as one of the perpetrators shouted: “You’re a f*in’ faggot! You should be with a man.” Then the group repeatedly punched the gay man and the two diners left fearing for their lives. The suspects followed, caught them and continued the beating.

The Antelope Valley had 35 reported hate crimes in 2011, representing a slight improvement over the previous year, but this area still leads the list of hate crimes per population. In late 2012, a Latino family found their house burglarized and vandalized with graffiti that included swastikas and the words “White Power.” A few months prior to this incident, two Black male friends, both 13, were the targets of ongoing harassment for having Latino friends; Latino gang members swarmed around the two at their apartment building shouting the name of their gang, “Southside,” threatening to beat them up if they saw them associating again with their Latino friends.

Toma said his commission is working with community partners in areas where there have been high levels of gang-related hate crimes. “We know there’s been a lack of after-school programs for young people, mentoring, family and parenting support,” he explained. “We’re working with respected ex-gang members to reduce violence through the county’s gang violence reduction initiative.”

Toma is referring to a multi-year initiative launched in 2007 which has spotlighted key areas within the county where hate crimes are prevalent. Though funding has been scaled back in recent years, he believes the program has provided valuable resources to reduce the number of hate crimes and increase racial harmony. “We’re obviously pleased about the general decline. We think it’s due to a lot of factors...increased investment by our governments and communities in the nonpunitive approaches to dealing with hate crimes; getting to the root causes of where it’s coming from; working in the schools; implementing more policies and practices that are countering prejudices and bigotry.”

In August 2011, Palmdale’s First AME Church was firebombed, and garages and other property of Section 8 residents were vandalized with “I Hate Section 8,” swastikas and racial slurs.

Section 8 is the common term for the county’s Housing Choice Voucher Program that provides payment to the landlord—occasionally up to 80 percent—for low-income persons to move up from housing projects to a single-family home, many times in neighborhoods that they otherwise could not afford to live.

The Sheriff’s department in the Antelope Valley utilize what are called “compliance officers” who periodically stop by these residences in effort to root out fraud. Unique to the Antelope Valley are county housing inspectors who bring with them armed Sheriff’s deputies; they often find fraud but, according to Murrell, the deputies regularly use “heavy-handed” methods to make residents comply with their orders. He said many families believe the aggressive behavior by the housing and Sheriff’s departments have encouraged vigilante attacks and various hate crimes against African Americans.

“These guys come in like storm troopers, wrecking everything in sight in order to carry out their orders,” Murrell said. “We found a deputy’s bootprint on top of a dresser in a child’s bedroom, and they left the place in shambles without finding any drugs, no gang affiliation and no Section 8 fraud. These types of raids, under the guise of ‘compliance,’ are nothing more than a propaganda campaign by the Sheriff’s department to say Section 8 people are not welcome. There’s been no data produced to demonstrate that Section 8 people are harmful. All this does is create fear mongering between the Sheriff’s department and Black residents.”

Lancaster Mayor R. Rex Parris has for the past several years disputed these claims, but he did reveal in 2011 that he laments the amount of low-income residents migrating into his city from urban areas such as South Los Angeles, Watts and Compton. “What the county housing authority is attempting to do is move their poor up to the suburbs so they don’t have to provide them any services, such as medical or rehabilitation services,” Parris to the Los Angeles Times. “It’s a systematic conspiracy. Do I think there is racism involved? Absolutely. But I don’t think it’s coming from our end.”

Because of these Section 8 raids, the DOJ began an investigation two years ago against the cities of Palmdale and Lancaster, as well as the Sheriff’s department. A multi-million dollar lawsuit may be forthcoming if the parties cannot reach an agreement.

“The level of hostility in these cities as expressed and enforced by authorities is astonishing,” said Catherine Lhamon, director of impact litigation at Public Counsel, a public-interest law firm representing the mostly minority plaintiffs. She said that those who claim to have been unjustly terminated from Section 8 find each city acts in support of county actions which merely “rubber stamp” the cutoff requests. “Fifty years after courts outlawed racial segregation, Lancaster and Palmdale have turned back the clock, turning neighbor against neighbor in the process. They should be building community, not tearing it apart.”

Public Council found that about 58 percent of all recommended Section 8 terminations in Los Angeles County between 2006 and 2010 came from the Antelope Valley, even though Palmdale and Lancaster represent only 17 percent of the county’s Section 8 households.

“Not so,” says V. Jesse Smith, president of the Antelope Valley NAACP. “This city (Palmdale) has made the words ‘Section 8’ almost something that if you’re connected with it, you’re a criminal.” Smith said most of these raids are not looking for fraud but, rather, are trying to unearth gang ties. “The Section 8 problems here have been ongoing. These are innocent citizens being tied to gangs because they are low-income Black persons.” Smith said when outgoing Sheriff Lee Baca learned in 2012 that there was a so-called “war on gangs” in the Antelope Valley, city officials from Lancaster met at a church to say, essentially, they were going to “hunt” Blacks. “Baca effectively blessed the deputies in the Antelope Valley to terrorize Blacks,” Smith said. “ I believe that the Section 8 problems here played a role in Baca’s retirement.”

Last summer, the DOJ demanded that Los Angeles County and the cities of Lancaster and Palmdale pay $12.5 million to those Section 8 recipients allegedly discriminated against, or risk being sued and placed under a consent decree. The settlement demand comes after a federal investigation concluded “some Los Angeles Sheriff’s Department personnel in the Antelope Valley engage in a pattern or practice of unconstitutional and unlawful policing regarding stops, searches, seizures, excessive force and discriminatory targeting of voucher holders in their homes.”

Baca’s spokesman, Steve Whitmore, said the LASD also implemented changes in the Antelope Valley not because of alleged misconduct, but because “...the Sheriff always believes we can do better,” adding, “We adamantly disagree with the DOJ’s assertion. We stand resolute that we have not discriminated against the public.”

Smith said his organization, T-Cal and other African American civic groups have developed and want to maintain a positive working relationship with the Sheriff’s department. “We’ve come a long way with the Sheriff’s department and have produced some excellent programs that benefit the community. Now, they’re reaching out to us. We want to maintain this relationship.”