Could Turning Down the Thermostat Help You Lose Weight? 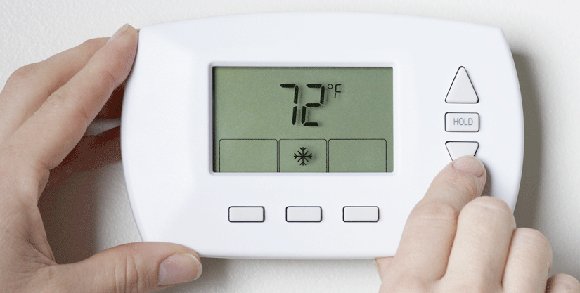 Could your warm and cozy home be hindering your weight-loss efforts?

Dutch researchers say keeping temperatures a little chillier at home and the office might be an additional weapon in the fight against obesity.

“What would it mean if we let our bodies work again to control body temperature?” said study author Dr. Wouter van Marken Lichtenbelt, an associate professor in the department of human biology at Maastricht University Medical Center.

In the new study, his team explored whether frequent exposure to mild cold temperatures would boost the body’s energy expenditure. In other words, would peoples’ metabolisms ratchet up a notch -- burning more calories -- if they lived on the cool side?

Prior studies have shown that shivering increases heat production in people, according to the study. And one Japanese study found that people experienced a drop in body fat after spending two hours a day for six weeks at a temperature of about 63 degrees Fahrenheit.

Of course, chilly temperatures can bring on the shivers. The researchers said shivering is a short-term biological response to extreme cold that protects humans from hypothermia, or dangerously low body temperatures. More recent studies show that another type of shivering, called non-shivering thermogenesis (NST) -- an animal response to fighting milder cold temperatures -- also increases heat output, but not so fast that a body can’t keep up with producing heat.

“In most young and middle-aged people, NST increases by between a few percent and 30 percent in response to mild cold exposure,” the researchers said in their report. “Thus, NST can have a physiologically significant effect upon energy expenditure.”

Prior research from the Dutch team showed that people gradually acclimate themselves to cooler room temperatures. People who spent six hours a day at 59 degrees Fahrenheit felt more comfortable and shivered less by the end of 10 days in this environment, the researchers found.

The paper is largely based on theory, said Dr. Mitchell Lazar, chief of the division of endocrinology, diabetes and metabolism at the University of Pennsylvania.

“But there is certainly evidence in people as well as rodents to suggest that reducing temperature makes the body burn more calories to keep up body temperature,” said Lazar, who was not involved in the new study.

So how much time sitting in a chilly room would it take to burn, say, 100 calories? It’s too early to know, said van Marken Lichtenbelt.

“We do have clear evidence that cold adaptation increases energy expenditure,” he said. “There is no doubt in this respect. How pronounced these effects are in everyday life, especially in the long term, is not yet known.”

The researchers are planning long-term experiments that involve having people live in cooler environments while tracking their weight over time. “We will vary indoor temperature and weight, and many other health parameters will be monitored,” van Marken Lichtenbelt said.

“The other experiment ... is ‘cold-temperature training,’ also known as ‘acclimatization,’” van Marken Lichtenbelt said. “This has been shown to rev up brown fat in rodents, and it seems possible that it could do the same in people.”