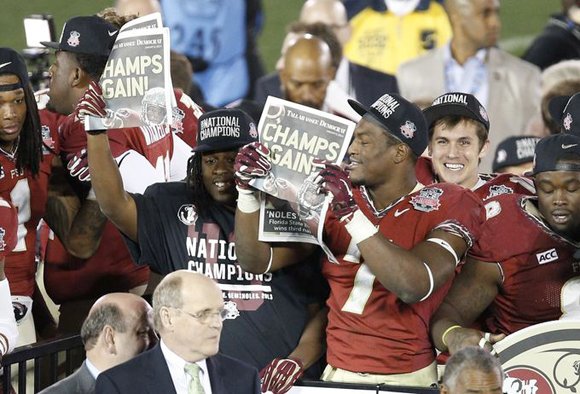 Jameis Winston threw a two-yard touchdown pass to Kelvin Benjamin with 13 seconds to play Monday night to give Florida State a 34-31 victory over Auburn in the Bowl Championship Series National Championship Game at the Rose Bowl.

The Seminoles drove 80 yards on seven plays in 58 seconds after Tre Mason put the Tigers ahead on a 37-yard touchdown run with 1:19 remaining.

Winston, the Heisman Trophy winner who turned 20 today, completed six of seven passes for 77 yards on the final drive, including a 49-yard pass to Rashad Greene on the second play.

The Seminoles (14-0) faced third down once on the drive, initially third- and-three from the Tigers five-yard line. A delay of game penalty pushed the ball back to the 10.

Auburn cornerback Chris Davis was called for pass interference in the end zone, giving Florida State a first down on Auburn’s two with 17 seconds left.

Davis had returned a missed field goal attempt 109 yards for a touchdown as time expired for a 34-28 victory over No. 1-ranked and previously undefeated Alabama, the two-time defending national champion, Nov. 30.

Winston threw the winning touchdown pass on the next play before a crowd announced at 94,208.

“I wanted to be in that situation because that’s what great quarterbacks do,” Winston said.

“Any quarterback can go out there and perform when they’re up 50-0 in the second quarter. That’s what you’re judged by, especially by your teammates. I’m pretty sure I got more respect from my teammates and the people around me on that last drive than I got the whole year.”

Winston was selected as the Offensive MVP for completing 20 of 35 passes for 237 yards and two fourth-quarter touchdowns.

“It was the best football game he played all year,” Seminoles coach Jimbo Fisher said. “For three quarters he was up and down and he fought. And just like any great player, some nights you don’t have it.

“When you can go back like the great ones do, it’s not my night but we’ve got a chance to win this ballgame, it’s in the fourth quarter, I’ve got one or two touches left and you can take your team down the field and lead them to victory, that’s what a great player is to me.”

Florida State cornerback P.J. Williams was chosen as the defensive MVP. He intercepted a pass by Nick Marshall early in the fourth quarter. Winston threw a 11-yard touchdown pass to Chad Abram on the ensuing drive, cutting the Tigers lead to 21-20.

Auburn responded by driving to the Florida State six-yard line, but

Kermit Whitfield returned the ensuing kickoff 100 yards for a touchdown, putting the Seminoles ahead for the first time since the first quarter.

“They cut it back and they hit a seam,” Tigers coach Gus Malzahn said.

“There was some good execution. Obviously we didn’t cover it very well.”

It was the first time Auburn allowed a touchdown on a kickoff return since a 2010 game against Chattanooga.

The loss ended the Tigers (12-2) hope of completing the greatest turnaround in major college football history. A victory would have surpassed the 8.5-game improvement by the 2000 Hawaii team that went from 0-12 to 9-4.

Auburn was 3-9 in 2012, fired coach Gene Chizik, and replaced him with Malzahn, who coached Arkansas State for one season after being the Tigers offensive coordinator for three seasons, including their 2010 national title campaign.

Auburn was seeking to become the eighth consecutive Southeastern Conference team to win the national championship.

The Seminoles were the first Atlantic Coast Conference team to play in the National Championship Game since they appeared in each of the first three, losing in 1999 and 2001 and winning in 2000.

Marshall threw two touchdown passes and ran for a third score in the first half to help give the Tigers a 21-10 halftime lead.

Mason, a son of Vincent Mason, a member of the influential hip-hop group De La Soul, ran for a game-high 195 yards on 34 carries and caught Marshall’s first touchdown pass.

Mason finished the season with a school-record 1,816 yards, breaking the previous record of 1,786 set by Bo Jackson his Heisman Trophy-winning 1985 season. Auburn played 12 games in 1985, two fewer than this season.

Marshall completed 14 of 27 passes for 217 yards and two touchdowns. He had one pass intercepted.

The Seminoles set the single-season scoring record by a Football Bowl Subdivision team, 723 points, breaking the previous record of 716 set by Oklahoma in 2008. Both teams played 14 games. This was only the second time this season Florida State was held under 40 points.

The game marked the end of the BCS which began in the 1998 season and matched the top two teams as determined by a combination of human and computer polls.

It will be replaced by the College Football Playoff, which begins with the 2014 season. A committee will select the top four teams and determine the semifinal matchups.