Goes ahead on fourth-quarter touchdown pass 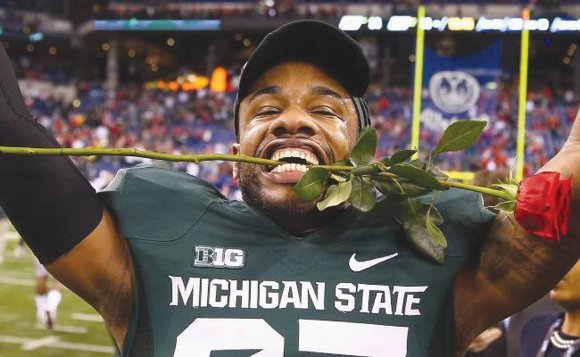 Connor Cook threw a tie-breaking, 25-yard touchdown pass to Tony Lippett with 13 minutes, 22 seconds to play to give Michigan State a 24-20 victory over Stanford Wednesday in the 100th Rose Bowl Game.

The Spartans were the first team trailing at halftime in the Rose Bowl Game to win since Wisconsin in 2000, also against Stanford. The victory was the second by a Big Ten team in the conference’s last 11 Rose Bowl appearances.

Michigan State (13-1) entered the game leading the nation in total defense and rushing defense. It limited the Stanford offense to a field goal over the final three quarters after allowing Tyler Gaffney to run 16 yards for a touchdown on the game’s first series and Jordan Williamson to kick a 34-yard field goal later in the first quarter.

“In the second half, they made some good adjustments,” said Gaffney, who ran for a game-high 91 yards on 24 carries, but was limited to 12 yards on 13 second-half carries. “Everywhere I looked, there was a green defender.”

Michigan State coach Mark Dantonio said the Spartans’ defense “played outstanding in the second half and the stops on fourth down were huge for us.”

The first came in the third quarter when Gaffney was tackled by linebacker Denicos Allen for a three-yard loss on a fourth-and-three play from the Michigan State 36-yard yard line.

Ryan Hewitt for no gain on a fourth-and-one play on the Stanford 34-yard line.

Elsworth was chosen as the Defensive Player of the Game. The fifth-year senior made four tackles in his only college start, replacing the suspended Max

Bullough, a third-team All-American whose suspension for violating team rules was announced Thursday. Dantonio did not say what rule or rules Bullough violated.

“Kyler Elsworth is a playmaker,” Allen said. “He made a big block against Wisconsin (in 2011) and he made some big stops on fourth down in the

(Big Ten Conference) championship game a couple years ago. I just had confidence in him.”

Cook was selected as the Offensive Player of the Game for completing 22 of 36 passes for 332 yards and two touchdowns. He had one pass intercepted.

Stanford quarterback Kevin Hogan completed 10 of 18 passes for 143 yards and had one pass intercepted.

Playing before a crowd announced at 95,173 -- the largest for a Rose Bowl Game since the 1998 contest between Michigan and Washington State -- the

Michigan State’s comeback began when Jeremy Langford ran two yards for its first touchdown with 10:45 left in the second quarter, one play after

Stanford cornerback Wayne Lyons was penalized for pass interference in the end zone on a third-and-goal play.

The Cardinal (11-3) regained a 10-point lead 2:07 before halftime when linebacker Kevin Anderson intercepted a Cook pass and returned it 40 yards for a touchdown.

On the ensuing possession, the Spartans drove 75 yards on seven plays, with Cook throwing a two-yard touchdown pass to Trevon Pendleton with 28 seconds remaining in the second quarter.

Stanford’s best chance to re-tie the score came on its next-to-last possession when Rhyne, the holder, threw an eight-yard pass to Trent Murphy, usually a linebacker, on a botched field goal attempt for an apparent first down on the Spartans nine-yard line with less than five minutes to play.

However, the play was nullified by an illegal formation penalty and the Cardinal settled for Williamson’s 39-yard field goal.