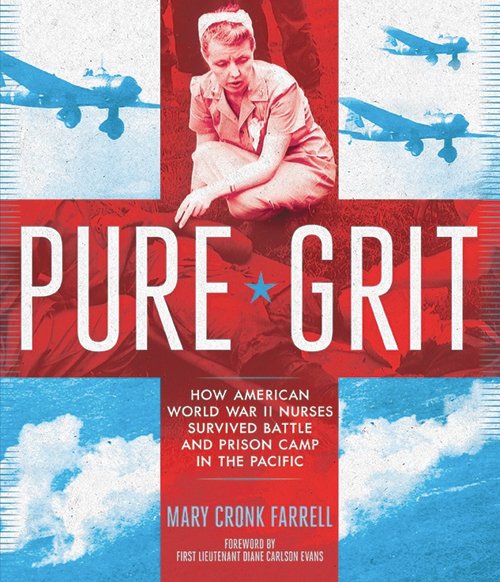 When it comes to chores around the house, you have lots of responsibility.

You’re in charge of mealtime twice a week. You take out the trash, clean your room, finish your schoolwork, and you even baby-sit sometimes.

That’s a lot, but you can handle it because you know you’ll have different responsibilities as you get older. And in the new book “Pure Grit” by Mary Cronk Farrell, foreword by First Lieutenant Diane Carlson Evans, (c.2014, Abrams Books for Young Readers, $24.95 / $27.95 Canada, 160 pages) you’ll see that some could be bigger than others.

By the late 1930s, at end of the Depression, Americans “had no interest in fighting a war of any kind…” Still, military leaders were concerned about defense, so they deployed a “joint Filipino-American Army” to the Philippines and opened two hospitals on the main island. Hundreds of American military nurses were sent to staff them.

At first, being a nurse in the Philippines was an easy, “routine” job. Nurses mostly cared for the families of officers also deployed to the area, and spent their free time shopping or enjoying the resort-like atmosphere.

None of the nurses had combat training. None of them knew that war was coming.

But World War II did come and the nurses were right where wounded military personnel needed them. It didn’t take long for the women to be overwhelmed by injured soldiers with horrific injuries, missing limbs, and worse. Not knowing how to care for those kinds of injuries, they learned quickly how to do minor surgeries and how to keep a boy comfortable as he died.

They also learned how to stay safe when the Japanese bombed their hospitals. They learned to protect the wounded, at risk to themselves. And when military officials evacuated civilians from the island, the nurses learned to make do with the meager supplies that remained.

That can-do attitude helped when 79 nurses were captured, along with other troops, by the Japanese in 1942. Taken to Camp O’Donnell in the Philippines, nurses saved as many American lives as they could with the scant resources they had—despite that the nurses themselves suffered terribly from disease and starvation in the POW camps.

Said one of their patients: “We looked at them like saviors… They were absolutely amazing women.”

Why isn’t a story like this more widely known? Author Mary Cronk Farrell asked herself the same question when she first learned of the POW nurses. “Pure Grit” is the result of her curiosity and research.

Through interviews with one former nurse and the children of others, Farrell tells an exciting, often astounding tale that was largely ignored for 40 years. Kids, particularly those with parents in the military, may be outraged about that—but beware, because they may likewise be disturbed by the many graphic after-battle descriptions that are here. Those parts surely made me squirm, as much as I liked this book.

Still, this is an important story that needs telling and I think 11-to-17-year-old readers will appreciate knowing it. For your future soldier, military fan, or WWII enthusiast of any age, “Pure Grit” will be responsible for a lot of reading.