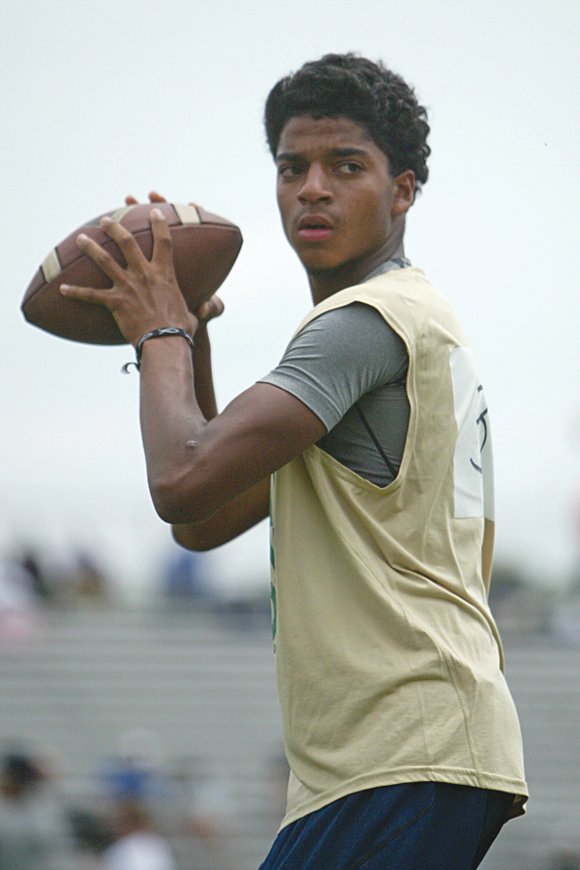 Dorsey High School senior quarterback Noah Whitney worked hard on the football field and in the classroom. He will be playing football and baseball at the University of Redlands in the fall./OW Photo by Jason Lewis

Dorsey High School senior quarterback Noah Whitney stands at 6’2”, and he likes to drop the bomb, repeatedly. Playing at a school that is known for their speed has worked great for the strong armed quarterback, who would lay the ball out downfield and allow his receivers to chase it down.

Whitney has more than a strong arm; he has the mental abilities to excel at the position. He is a leader, composed under pressure, makes smart decisions, and with a 3.39 grade point average in the classroom—his favorite subject being math—he can solve equations with ease, which gives him great abilities to read a defense.

Whitney’s football career began when he was seven-years-old, with the Baldwin Hills Bruins youth football team. That program helped shape him into the young man that he is today.

“It was a family atmosphere,” Whitney said. “It wasn’t just football. Our coaches stressed that the lessons that we learned playing football were life lessons.”

One lesson that Whitney learned was that with hard work and patience, great things will come. His dream was to play quarterback, but the team that he played on at Baldwin Hills already had a player at that position, so he had to play receiver. He could have taken the route of many athletes and moved on to another team, but he did not want to hop from program to program.

“I just felt like, I wanted to finish where I started,” Whitney said. “I didn’t want to be known as the type of person who switched when stuff isn’t going good. That just shows that I fought through adversity.”

Whitney’s patience paid off when he finally got his chance during his final season at Baldwin Hills.

“There was one game where they gave me the start (at quarterback), and I just fell in love,” Whitney said. “I just like to take control of everything. I like leading my team. I’m the type of person that can take the credit when it’s bad credit, and when it’s good credit. I just feel like I’m somebody who can keep my team composed and make sure everybody is doing good.”

Whitney took that same attitude to Dorsey, where he spent his first season on the sidelines, as another quarterback played ahead of him. He waited his turn, worked hard, and then as a sophomore he was able to break the Junior Varsity team’s passing records. During his junior season, he found himself on the sidelines again, as a senior quarterback was playing in front of him. Many people told him that he should have been playing more that season, and some thought that he should have transferred like a lot of the top athletes do when they are looking for a better situation. But Whitney saw the importance of staying at Dorsey.

“I just felt like, I had a sense of loyalty,” Whitney said. “A sense of loyalty to who actually wanted me out of Pop Warner, and wanted to help me become a better player.”

Whitney was able to maximize his time on the sideline during his junior season.

Whitney spent his entire summer attending football camps, including one in Detroit, and he worked hard with his coaches and teammates at Dorsey, and it paid off in the very first game of the season. He set Dorsey’s single game passing yards record when he threw for 356 yards and four touchdowns in a season opening win against Fairfax High School.

After a good senior year, Whitney is going to take his talents to the University of Redlands, which is in San Bernardino. It is a private school, and a very prestigious academic institution. He is going to major in kinesiology, which is the study human movement, and he then plans to go to medical school and become a sports doctor. His dream has always been to play in the NFL, but he is preparing himself for life after football.

“When I first started playing football, the NFL was the dream; Division I football was the dream,” Whitney said. “It didn’t pan out how I wanted it to, but I know that God has a plan for me, and you can’t question what he has going for you. I just take what I get, and I’m going to produce on what ever level I’m on. I’m going to give it everything that I have, and if God has it planned for me to play in the NFL, than it’s going to happen. If not, then I’m going to have a great education from a great school, and I’m going to be able to make a great living, and have a great family.”