Money to help is in short supply 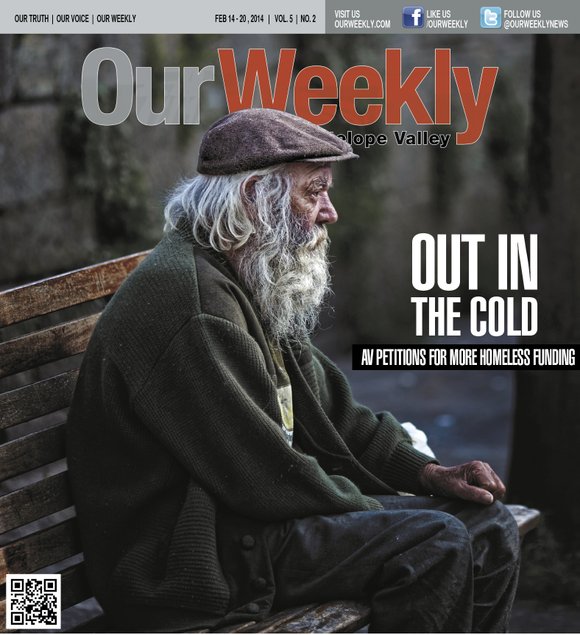 Lancaster Mayor R. Rex Parris last week railed against officials at the Los Angeles Homeless Services Authority (LAHSA) regarding inadequate funding for the growing population of homeless persons in not only his city, but throughout the Antelope Valley.

“Over the past few years, LAHSA has cut our funding by 10 percent,” Crist said. “Meanwhile, our region has experienced a nearly 400 percent increase in our homeless population.”

Crist is citing the latest federal figures which late last year recorded a two-year jump in the county’s homeless residents, which defies a national trend of a modest decline in the overall homeless population. The Department of Housing and Urban Development (HUD) said L.A. County’s homeless population rose significantly from 2011 to 2013, to 57,737—second only to New York City. The number of homeless Americans has reportedly dropped six percent since 2010 to 610,042.

“We’re not as far as we planned to be or as we should be,” Donovan announced in January. “We are seeing more families fall into homelessness, as well as individuals who may cycle through homelessness in Los Angeles County.” At the beginning of 2013, 254,000 men, women and children were on the street during the previous year in L.A. County. Presently, 82,000 Angelinos are homeless each night.

The Antelope Valley has seen cuts in its funding, just as more homeless persons are arriving to get away from the ever-rising housing costs throughout the remainder of the Los Angeles Basin.

Only the most hardy individuals seem to brave the frigid temperatures of the Antelope Valley nights. Lancaster Councilman Ron Smith fears the increase in destitute persons and the falling winter temperatures will be a recipe for disaster. “The Antelope Valley is not only neglected, but virtually ignored for social service funding,” Smith said. “Make no mistake about it, this produces human tragedy. We are not a beach community. With bitter cold winter temperatures and sweltering summers, people die. LAHSA can no longer ignore the people who are in need of the most compassion and help.”

The LAHSA points to last year’s government shutdown, the 2012 cutoff of government stimulus money, as well as prison realignment and jail overcrowding as reasons for the spike in homeless persons. The biggest increase was in single adults, but the economic downturn has revealed the difficulty in tracking the increase in the homeless. Fewer children are able to attend school regularly and food banks are seeing more empty shelves.

“ The children may stay with a relative while the parent is forced to take to the streets,” said Mike Arnold, executive director of LAHSA, who has cited soaring housing costs as a main contributor to the county’s rising homeless rates. “We need to do more.”

Because the Antelope Valley encompasses both city and rural areas, there is no definite statistic for the number of homeless in the community. Many homeless persons have found clever ways to survive without community support or shelter assistance, and do not come forward to be counted. A 2011 UCLA study revealed an estimate of homeless in the Antelope Valley to be between 4,500 and 6,000 people per month. Researchers admitted that the actual number may be three to six times higher than the 2010 Census estimate. Most of the Antelope Valley homeless have migrated from South and Metro Los Angeles, but the warm weather in Southern California, in general, has lured more persons here from across the country. About 14 to 18 percent of homeless adults countywide are not U.S. citizens. Also, there is an increasingly high rate of homeless veterans—up to 20 percent—appearing on the streets daily. African Americans comprise half of the county’s homeless population, disproportionately high compared to the percentage of Blacks in the county overall (about nine percent).

“Lancaster continues to unite with organizations throughout our valley to seek practical solutions,” Crist said. “We’re already working with the City of Palmdale to seek ways to assist the homeless population in our area, 40 percent of which are veterans who have fought for our freedom. In fact, we’ve partnered with the Grace Resource Center to host a men’s emergency homeless shelter at the A.V. Fairgrounds during the winter months.”

Service providers have been under pressure the past six years to assist the growing ranks of those hurt via the Great Recession which disproportionately hit California and the Los Angeles region especially hard. Los Angeles County still suffers from one of the nation’s highest unemployment rates and had one of the highest rates of job losses during the economic downturn. There is a lack of affordable housing in the county and the cost for rental housing has skyrocketed. Adding to these woes was AB109, the prison realignment measure, which released large numbers of parolees on to the street with little resources available to house them.

Illegal immigrants have been affected greatly by the poor economy and more of these families, finding themselves homeless, have decided to move to other states or even return to their homelands. Illegal immigrants played a large role in the nation’s economic boom of the 1990s (injecting upwards of $150 billion yearly in economic activity), but a lack of jobs, high cost of housing and inflation has seen their input into the local economy drop considerably.

The LAHSA report found that homeless single adults increased by 29 percent, going from 35,838 in 2011 to 46,303 last year. Unaccompanied youth 18 years and under grew by 122 percent, rising from 366 in 2011 to 817 in 2013. According to the Institute for the Study of Homelessness and Poverty, conducted by the Weingart Center downtown, homeless youth are estimated to comprise from 4,800 to 10,000 of the known homeless persons within the county. Arnold explained that family homelessness is one of the most difficult numbers to count because homelessness often results in the separation of family members. Children, he said, are given housing by family members or provider programs, but the parents may become homeless on the street. Two-thirds of the 6,678 family members who are homeless are children under the age of 18.

“It clear that the deep economic downturn, job losses and housing crash suffered by our region left many people without homes and without a social safety net,” said Los Angeles County Supervisor Mark Ridley-Thomas. “Homeless individuals are among the most vulnerable people in our communities, and we can and must do more to help them access new jobs, secure the new affordable housing we are building throughout the county and regain their footing in society.”

Mike Antonovich heads the fifth district (covering the Antelope Valley) homelessness within the supervisorial district remains the lowest within the county, comprising less than eight percent. The number of beds requested for these persons, naturally, coincides with the number of clients. Five years ago, the fifth supervisorial district counted some 12,000 homeless persons but had only 1,300 beds. By contrast, the second supervisorial district had roughly 27,000 homeless persons and utilized 5,600 beds. However, much more funding is needed to house the Antelope Valley’s increasing homeless population, according to Valley Oasis in Lancaster, which has seen its share of county and private contributions dwindle since the start of the economic downturn.

“More money is certainly needed to care for the homeless population here,” said Carol Crabson, executive director of Valley Oasis. “The allotments are done by population, and certainly downtown has a higher percentage of homeless persons and they also have more resources to assist individuals and families.” Crabson said LAHSA representatives visit the Antelope Valley and know the plight of the homeless.

“Getting money is not easy,” Crabson continued. “We’d like LAHSA to look more into distribution, and they have been sympathetic to our budget constraints. The bad economy has resulted in fewer starts for low-income housing. With people out of work for so long, unemployment benefits being denied and restrictions at CALWORKS, we’re seeing more people become homeless.” Crabson added that the depiction of the homeless person today is far different than the dirty, scruffy wino people have associated with living on the street. “Today you see individuals and families who, just a week or so earlier, were living in a home and had food and heat. Now these persons are living out of their car and trying to provide for their families the best way they can.”

Crabson said cash donations are down—and have been since 2008. “We rely on these private donations, but the Antelope Valley seems to take a little longer to ‘bounce back’ than would Los Angeles and other urban areas. Much of this depends on the reasons for charitable giving. Sick children, the elderly and those with physical disabilities are often the first considered for donations and that’s appropriate. But donations for the homeless have fallen so much. The homeless are often misunderstood; people feel as though they’ve brought the problem on themselves.”

Adding to these woes are the frigid winter nights in the Antelope Valley which, Crabson explained, force persons to live in old cars, sleep under overpasses and even tunnel under the dirt and cover themselves with a blanket for warmth. “It’s rough for them, but they’re resilient and they find a way to survive on these cold nights.”

Homeless veterans are spread throughout the county, with many of these persons suffering during the past 10 years from Post Traumatic Stress Disorder. An opportunity center in Lancaster, operated by the National Mental Health Association of Greater Los Angeles, works as a one-stop referral and service center for those veterans with mental illness and/or substance abuse problems who find themselves penniless and outdoors. The opportunity center provides permanent housing referrals, employment training and drop-in services such as showers, laundry, clean clothes and food.

This month, Sen. Diane Feinstein (D-Calif.) introduced a bill to smooth the way for the U.S. Department of Veterans Affairs to partner with private agencies to delvelop housing for homeless veterans on its West Los Angeles campus. The legislation would authorize the department to lease two dilapidated buildings on the long-neglected 387-acre site to a private, non-for-profit group to renovate them into long-term therapeutic housing for disabled veterans. According to Bobby Shriver, former mayor of Santa Monica and son of the late Sen. R. Sargeant Shriver and Eunice Kennedy-Shriver: “The legislation is going to bring some of the most innovate treatment facilities onto the campus. These people are living in dumpsters now.” The $17.6 million project may open this spring to house 65 homeless veterans.