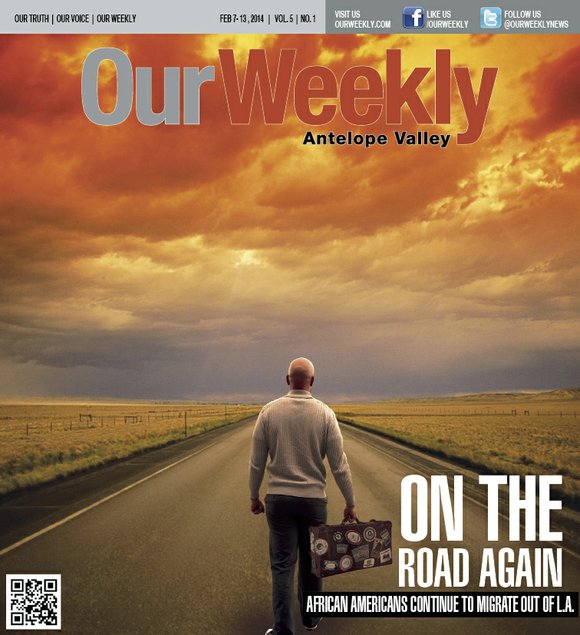 The odyssey of African Americans in greater Los Angeles is a tale of hope and strident purpose. Today, Black households stretch throughout the Basin from the Inland Empire, through the South Bay and into the Antelope Valley having braved past socio-economic disparities to maintain Southern California as one of the nation’s finest examples of ethnic mobility.

But there has been a steady decline in Black Angelinos. Many families have moved to outlying areas because of the high cost of living in the city, while others have returned to the so-called “southern heritage” of Houston, Atlanta, or Charleston, S.C. where home prices and—since the dawn of the Great Recession—gainful employment have lured more African Americans away from the west coast.

The result of this decline, according to BlackDemographics.com, is that Los Angeles has dropped from the sixth to the seventh largest Black population in the United States. The online site studies patterns of African American population, economics, education and employment trends and found in 2012 that the current relocation of Black citizens from Los Angeles has followed the same pattern as the urban areas in the Northeast and Midwest. Many persons who are able and/or have received formal education have left California to head to the South to seek better opportunities and a higher standard of living.

Three years ago, the Los Angeles Urban League released its annual “State of Black Los Angeles” to capture the latest settlement patterns of Black Angelinos, tying it as closely as possible to the most recent U.S. Census. It found that at the beginning of the millennium, Los Angeles still had the sixth largest Black population (900,000) among all metropolitan areas in the United States, but had declined by 50,000 by 2010. Blacks comprised roughly 9.7 percent of Los Angeles residents in 2000, but that figure has steadily declined each year (8.4 percent in 2010). Statewide, the African American population has fallen from 6.6 percent in 2000 to 5.9 percent today. Across Los Angeles County, African Americans made up 41 percent of the population in 2000, but that figure has declined to 38 percent.

The report found that Blacks still have their highest percentage of residency in Los Angeles, but have steadily moved to the suburbs of Long Beach, Inglewood, Compton and Hawthorne. Also, from 2000-2011, Lancaster and Palmdale in the Antelope Valley have replaced Carson and Pasadena as the cities with the sixth and seventh largest Black populations in Los Angeles County. Most Blacks still residing in the city may be found in Ladera Heights, View Park/Windsor Hills, Del Aire, Culver City, as well as the West Adams district and, further south, small populations in La Habra and La Mirada. African American home ownership in 2010 in Los Angeles amounted to 40 percent, compared to 66 percent for White residents. The so-called “rental burden” or percentage of renters paying more than 30 percent of their income in rent saw African Americans amount to 52 percent of these households, just a little higher than Whites at 47 percent.

Last year, a report from the United States Department of Justice (DOJ) investigated alleged abuse and civil rights violations by law enforcement in the Antelope Valley, but also found that city officials and longtime residents would prefer that some areas such as East Palmdale not be transformed into a “dump yard” for poor minorities from Los Angeles. The report found that it was primarily an economic issue because Black families found it was cheaper to live in the Antelope Valley, but the economic downturn has made it more difficult to make ends meet. In short, Black, Latino and some White families in the Antelope Valley have had to compete within the same shrinking economic “pie” and that circumstance may have exacerbated already fragile race relations.

In the 1990s, demographics began to change in the Antelope Valley when lower real estate prices began to attract families from other parts of Los Angeles County. The 2010 Census saw Lancaster grow from 97,291 persons in 1990 to 156,633. The proportion of White families has fallen during this period from 79 percent to 49.6 percent. But during this time, the Black population in the Antelope Valley tripled from 7.4 percent to 20.5 percent; the Latino population also grew considerably from 15 percent in 1990 to 38 percent today.

Palmdale’s population has grown in 20 years from 68,917 to 152,750, with the percentage of White households falling from 76 percent to 49 percent. The proportion of Blacks in Palmdale has more than doubled from 6.4 percent to 14.8 percent; the Latino population grew from 22 percent to 54.4 percent.

From 2000-2008, the number of Black Section 8 holders grew in Lancaster from 510 to 1,530; in Palmdale during that period participants rose from 455 to 825. In 2010, 73 percent of voucher holders in this portion of the county were in Lancaster, and 69 percent resided in Palmdale. By 2010, 37 percent of vouchers issued by the Housing Authority of the County of Los Angeles were issued to mostly Black residents of the Antelope Valley. Some 40 percent of persons on the Section 8 waiting list are African American.

The 2010 Census as well as the Urban League report found that an increasing number of Black families are moving from Los Angeles to the Inland Empire and other middle-class areas such as Rancho Cucamonga and as far away as Bakersfield, Fontana, Chino and Rialto. Sixty years ago, most Blacks moving from the south to the west coast would have avoided these rural areas in search of “city life,” but with the inner city becoming more crowded and resources dwindling, these outlying areas have become the latest destination points for African Americans. The continued weak economy has affected Black migration into the Inland Empire which used to be a magnet for more affordable single-family homes; the 2008 housing crash saw construction there fall by more than 50 percent, meaning the loss of 70,000 jobs.

Now with 4.1 million residents, the Inland Empire is the 14th largest metropolitan area in the United States as well as being the fastest growing area in California. Between 2000 and 2008, the Inland Empire population expanded by 861,000 (26 percent). However, some cities in the Inland Empire have seen their Black population drop. Blacks comprised 22.3 percent of Rialto’s population in 2000, and that share today has declined to 17.3 percent. This decline in Rialto and San Barnardino has resulted in a larger percentage of African Americans moving to Rancho Cucamonga and as far north as Victorville.

No matter the region where Blacks have migrated to within Southern California, they have supported politicians who speak and campaign for their ultimate welfare. For instance, African Americans have long resided in Riverside County but have never had a particularly large population; voting trends there are said to be “unique to the state” according to Paul Mitchell, a voting data expert who last year studied the Black political influence. He said that although the area is characteristically non-partisan, Riverside is distinct for consecutively electing Blacks with Cheryl Brown (D-Riverside) replacing Assembly member Wilmer Amin Cartin in 2012.

Mitchell told Capitol Weekly late last year that Riverside County is “...the only district in the state that’s repeatedly elected an African American that doesn’t have a known, regular African American population like the Compton or Oakland areas.”

In 2010, Black Enterprise magazine found that Los Angeles has lost its appeal for African Americans, not being listed in key categories of economic mobility including: home ownership rates, median income, high unemployment, high rejection of home loans, lower percentage of college graduates, lower percentage of households earning more than $100,000 and the shrinking percentage of Black-owned businesses. Only Houston, Tex., among the historic “big city” destinations (ex. New York, Chicago, Detroit, Philadelphia), made the list of the most desirable and progressive cities for Black economic advancement.

“Black Los Angeles is and has always been a space of profound contradictions,” said Darnell Hunt, director of UCLA’s Ralph J. Bunche Center for American Studies. He cited the powerful impact African Americans have made in Los Angeles since the first settlers in 1781 through the period of the region’s tremendous growth and to the present day. “Just as Los Angeles has come to symbolize the complexities of the early 21st Century, so too has Black Los Angeles come to embody the complex realities of race in so-called ‘colorblind’ times.”

In the 2010 book Black Los Angeles: American Dreams and Racial Realities, Paul Robinson, a geographer and assistant professor at Charles R. Drew University in Watts, revealed that of the 46 settlers of El Pueblo de Nuestra Senora de la Reina de Los Angeles—the small Spanish town that would eventually become Los Angeles—26 persons had African ancestry. These original settlers came from areas that are now states in western Mexico, a region where the Spanish empire relied heavily on African and mulatto populations as soldiers and laborers in agriculture and mining.

“The African-origin population of Los Angeles has always been diverse,” Robinson wrote, “but it has never been as diverse as it had become by the first decade of the 2000s.” Robinson said the decline in American-born Blacks locally has been supplemented by Black immigrants from the Caribbean, Africa and the Americas who have aided a small population growth of one percent since 2000.

“As the county’s non-native population grew throughout the decade, the diverse groups comprising it increasingly challenged common assumptions about the people and spaces comprising ‘Black Los Angeles,’ Robinson explained.

Media images of Black communities, particularly South Los Angeles, have often unfairly stereotyped African Americans throughout the county as poverty-stricken and reliant on government programs. “In the early 21st Century, these images of South LA continued to label and limit African Americans,” said Dionne Bennett, an anthropologist and assistant professor of African American studies at Loyola Marymount University. “These images usually omitted the educational, social and economic diversity of Blacks not only in South Central, but throughout Black Los Angeles and, ultimately, Black America.”