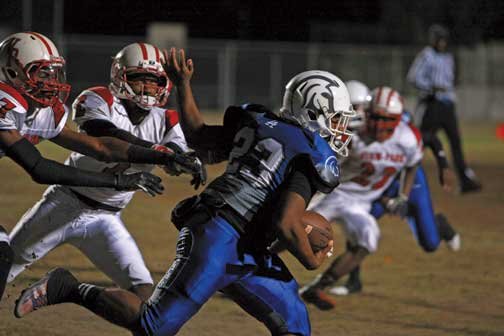 Los Angeles High School, pictured here in a second round matchup against View Park, turned a 1-9 team in 2013 into champions in 2014./OW photo courtesy of Jason Lewis

For Los Angeles, they are the biggest surprise in the City Section this year, because they came out of nowhere to win their first title since 1965. They were a such a big surprise because the team did not show any signs that this could be possible in the years leading up to this. Last year they were 1-9.

Los Angeles had fallen on hard times; they had not fielded a competitive team in years. But Eric Scott showed up last spring, and he convinced his athletes that not only were they good football players, but that they could be champions. This past Saturday at the Coliseum, they proved him right in their 28-14 victory over Monroe.

Most of the seniors on this team have been around for the last two years, where the team had a combined 5-15 record. This year, they were 12-2. What a difference a year, and a really good coach, can make.

Hamilton also came out of nowhere this season. They won the Division II title in 2009, but have struggled since. This year, when they were better than most teams that played in the Division I playoff bracket. They ended Venice’s dominance of the Western League, and they capped off their great season with a 58-30 championship game victory over Sylmar.

Rogers completed 12 of 24 passes for 194 yards and three touchdowns.

Shaw caught touchdown passes of 54, 15, and 55 yards. He also threw a 54-yard touchdown pass and returned an interception 90 yards for a touchdown.

Richards rushed for 114 yards on 15 carries.

In the Division I matchup, the Marine League was center stage. That is the best league in the City Section, so it was only fitting that they sent two teams, Narbonne and Carson, to the title game.

Carson got the best of Narbonne earlier this season, winning their league matchup 39-35. But Narbonne has championship experience, as they have played in the last four title games. That was a major factor in their 33-20 victory.

Narbonne used a running back by committee approach, as Damion Gatlin, Sean Riley, Roman Ale, and Justin Franks combined for 216 yards on 40 carries. Gatlin rushed for three touchdowns. Quaterback Roman Ale completed 6-of-11 passes for 141 yards, and he threw an 81-yard touchdown pass to Ikenna Ohaeri. Sean Riley returned a kickoff for an 89-yard touchdown.