The Paul Knox era at Dorsey comes to an end

Legendary high school football coach is a pillar to the community, but it was time to ‘move in another direction.’ 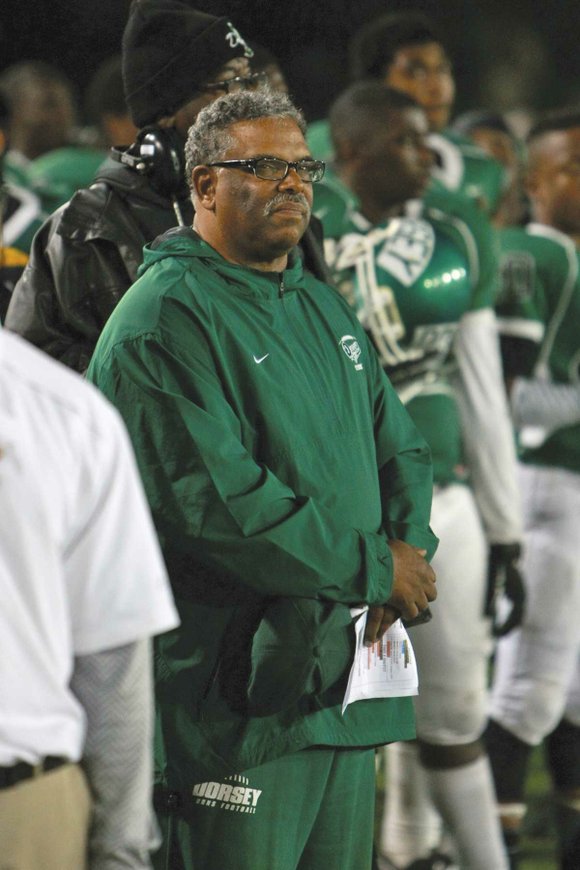 Paul Knox has manned Dorsey’s sidelines since 1985, and has led the program to four City Section titles./OW photo courtesy of Jason Lewis

All great things must come to an end at some point.  For Paul Knox, who is one of that greatest high school football coaches in Los Angeles City Section history, his time ended this past Monday when Dorsey High School Principal Reginald Sample informed the long-time coach that the program was going to head in another direction.

It was a difficult decision that Sample, who has been Dorsey's principal for five years, had given a lot of thought to.

This decision has sent shockwaves through Dorsey's community, as alumni and long time high school football fans have taken to social media to convey their displeasure.  But Sample views the situation in a different light.

"You can't drive forward looking through the rearview mirror," Sample said.  "At some point we have to move beyond what's happened in the past.  We understand that he's done a lot of great things, but we can't allow the past to dictate our future."

Under coach Knox, Dorsey has been one of the powerhouse programs in the City Section since he took over as the head coach in 1985.  He led the school to City titles in 1989, 1991, 1995 and 2001.  Along the way he has sent a number of athletes off to college with scholarships and to the pros.

Coach Knox has been much more than a football coach. He has been a great role model to many students who could have easily gone down the wrong road, as he has created a path to success for a community that has leaned on him. In a sense, he is Dorsey football, which is far greater than an athletic program.

As great as Dorsey has been during Knox's era, the team has not reached the heights of its past for several years.  Their rival Crenshaw has dominated the series as of late on their way to multiple City titles, and schools such as Narbonne and Carson has passed Dorsey by.  Dorsey routinely makes the playoffs, but getting out of the second round has becoming an issue in recent years.

Even though the program is still good, it is under producing to a certain extent, which Sample wants to change.  Knox being an icon and beloved by the community made the decision extremely tough.

"Like any great icon, like (Florida State University head coach) Bobby Bowden, or any other great coach who made a great impact on players' lives, at some point, somebody had to stand up and make a decision when we see that the program is hitting a roadblock to go to that next level," Sample said.  "I commend him for the great job that he's done, but like any great icon, at some point the time has come to turn it over to someone else."

That someone else is Irvin Davis, who coached Dorsey's junior varsity team.  Coach Davis is an alumni of Dorsey, and has been a part of the program for 23 years.  Two of his daughters attended the school, with a third one on the way, as she currently attends Audubon Middle School.

"He is somebody who I feel can lead us into the right direction," Sample said.  "Not just for winning football games, but for setting a tone and expectations for how our students are supposed to conduct themselves, how academics comes first, and discipline."

Coach Davis is also a teacher at Dorsey, which Sample feels is very important.  Coach Knox retired from his teaching position at Dorsey a year ago, but stayed on to coach the football team.  Sample felt that without the headcoach being on campus during school hours, it negatively impacted the program.

"I've seen the lack of discipline on campus trickle over to the football field," Sample said.  "A lot of horse playing on the sideline.  Now that there isn't a head coach on campus, it's easier for students to feel like they can get away with things.  I just feel that coach Davis can bring that discipline, that honor, structure, and hold the coaching, himself, and the students accountable.  I believe that will create a different culture."

"I feel that from watching coach Davis, and the way that he ran his JV program, there's a big difference in the kids from when they leave the JV level and get to the varsity level," Sample said.  "These same kids, who were blowing out teams on the JV level, when they get to varsity, it's the opposite.

"He has a system that I've seen be successful.  It's not so much of a farewell to coach Knox, but it's more of giving someone else a new opportunity to carry the tradition and on the foundation that coach Knox laid.  I think that anybody who truly loves Dorsey, who is truly committed, would be happy to see that someone else is having an opportunity.  Somebody who has proven, on a different level, that he has had success."

Initial reports stated that coach Knox had been fired, but Sample refutes that claim.  He met with coach Knox on Monday, and informed the coach that he did not want to push him out of the program, but move him into a different capacity.  Sample wants to keep Knox in a leadership role where he could continue to influence the players.

"It's not that I didn't want him involved in the program, it's just that head coaching, his time has come, and it's time to have somebody else who I feel will be a great leader," Sample said.  "People are going to be sad and people are going to have mixed feelings, and I feel that coach Knox has had a great run in the 29 years of coaching and I wish the best for him.  There is nothing personal between me and him, and I would still like for him to be a part of the program.  It wasn't a firing in a sense.  I just explained to him that I was looking to move in another direction, and I wanted his input on how I could best utilize him at this point of his career."

Sample has not heard from coach Knox about the offer.