Here's a look at nuclear power plants in the United States 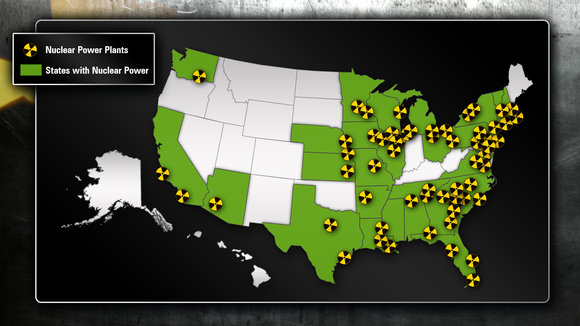 There are 100 commercial nuclear power reactor units licensed to operate in the United States. These operate in 31 of the 48 contiguous states.

The nuclear power reactor units provide the United States with 20 percent of its electricity.

Other Facts: The Nuclear Regulatory Commission or NRC maintains a threat assessment branch, which assesses security threats to nuclear facilities throughout the country.

Reactors are massive structures, typically constructed with two to five feet of steel-reinforced concrete. The containments have an interior steel lining, and redundant safety equipment to add further protection.

There are 31 licensed and operating research reactors in the United States. The majority are located at universities.

Since September 11, additional security measures have been put in place at nuclear facilities that includes increased patrols, augmented security forces and weapons, additional security posts, heightened coordination with law enforcement and military authorities and additional limitations on access to the site of personnel in vehicles.

August, 29, 2011 - North Anna Power Station near Louisa, Virginia is damaged during the 5.8 earthquake that hits northeastern U.S. The epicenter of quake is less than 20 miles from power station. No radiation leaks are detected.

February 9, 2012 - The Nuclear Regulatory Commission approves plans to build two new nuclear reactors near Augusta, Georgia. It is the first approval of new reactors since 1978.

Nuclear Regulatory Commission regions The country is broken into 4 regions: