Ebola is here: 5 reasons not to panic

Doctors know how it spreads and can keep contamination down 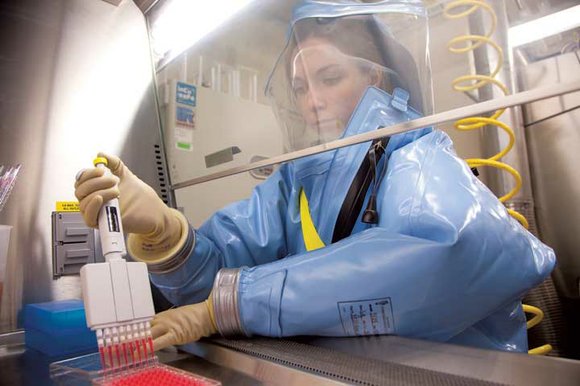 Donald Trump is tweeting that "We should not be importing (Ebola) to our homeland."

An Indiana congressman is worried that refugee children from Central America could pose a public health risk with "Ebola circulating."

And the Twitter-sphere is filled with people asking "how can we bring these patients to America," complaining that "We don't have enough problems in America! Let's import Ebola patients!" and speculating that treating them here is "highly irresponsible."

But the actual possibility of catching Ebola is incredibly remote.

It's a terrifying disease for sure. It typically kills 90% of the people who get it, and this most recent outbreak is the largest in history. But you don't need to panic, experts say, and you definitely don't have to worry about the two American Ebola patients who are being treated in Atlanta.

Here are five reasons why:

Ebola is an incredibly fragile virus. It does not fly through the air with the greatest of ease. It cannot be transmitted through a cough or sneeze. It doesn't move easily from human to human like the common cold.

Ebola is aggressively infectious, so people who are infected are highly likely to get sick. But it's not highly contagious.

"The Ebola virus spreads through direct contact with the blood, secretions or other body fluids of ill people and indirect contact -- for example, with needles and other things that may be contaminated with these fluids," said Stephan Monroe, deputy director of the Centers for Disease Control's National Center for Emerging Zoonotic and Infectious Diseases.

That's why health care providers who work in countries without proper protective gear can get it. That's also why people preparing bodies for burial have gotten it.

Although there is no vaccine and no cure, the one real advantage we have with Ebola is that doctors know how to control it.

Ebola isn't "some mystical pathogen (with) some bizarre mode of transmission," said Bruce Ribner, who oversees the special isolation unit that is treating the patients at Emory University Hospital.

Common-sense hygiene can stop its spread.

"Ebola is a virus that can be stopped and not spread in hospitals. The stakes are higher, but it's easily inactivated with typical hospital disinfectants," said Centers for Disease Control and Prevention Director Tom Frieden.

The two American patients with Ebola were flown to the United States in a plane outfitted with an isolation pod.

They are being kept in isolation at the Emory hospital with a specialized containment ward, one of four in the country.

In the containment ward, the vents are specialized. There's an intercom and plate glass that separates patients from visitors so they don't come into direct contact. There's a strict protocol on everyone and everything that goes into and out of the patient's room. Health care workers wear protective suits.

But any major medical center could really take care of an Ebola patient, said William Schaffner, an expert on infectious diseases at Vanderbilt University's School of Medicine.